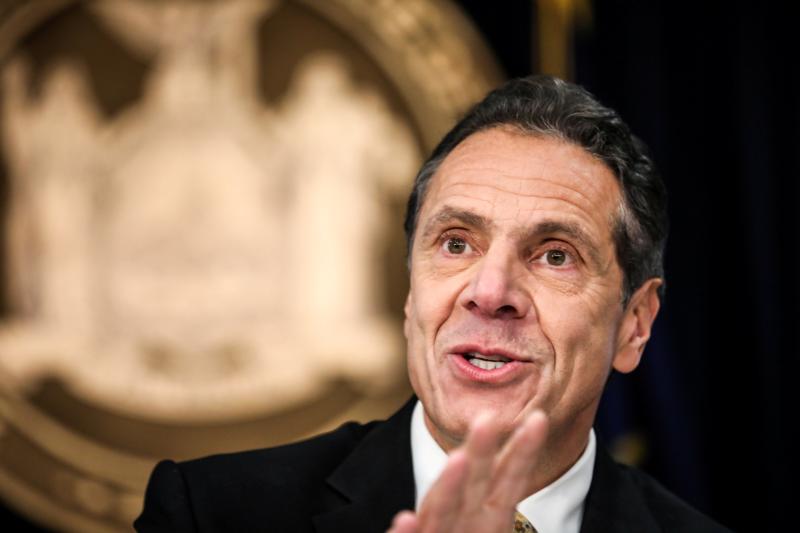 New York Gov. Andrew Cuomo speaks Nov. 13, 2018, during a news conference in New York City. Officials at the New York State Catholic Conference are calling the Reproductive Health Act, which will expand abortion access and is supported by Cuomo, "worse than we thought it would be." (CNS photo by Jeenah Moon/Reuters)

ALBANY — Officials at the New York State Catholic Conference are calling the Reproductive Health Act “worse than we thought it would be.”

“It foresees a time in New York where it’s a crime to be pro-life,” said Kathleen Gallagher, director of pro-life activities and the Catholic Action Network for the conference, which is the public-policy arm of the state’s Catholic bishops.

The measure, introduced in the Legislature the week of Jan. 7, will expand access to abortion in the state, despite being promoted as simply codifying Roe v. Wade, Gallagher said. It not only increases access to abortion across the board, including late-term abortions, but also goes beyond Roe, which left some limits in place, she noted.

“The RHA is a great blow to the pro-life community,” said Renee Morgiewicz, coordinator of Respect Life Ministry and parish services and for the Albany Diocese. “Many people in New York state have successfully held off the legislation for 12 years.”

In the past, a divided Legislature has helped keep the RHA at bay. With regard to life issues, so far, “the Republican Party has helped a lot with” supporting the pro-life agenda, said Morgiewicz. Now, with a Democratic majority in the state Senate, many pro-life issues are anticipated to take a big hit — particularly abortion.

“The fact that we’ve held this off for 12 years gives me great comfort,” Gallagher said. “It means we’ve saved some human lives, and we saved women from anguish.”

The measure is expected to pass within the first 30 days of the legislative session, as promised by Gov. Andrew Cuomo.

Dennis Poust, director of communications for the New York State Catholic Conference, said the numbers needed to prevent the bill from passing “just aren’t there.”

“The Assembly is overwhelmingly Democrat, and the governor is the one who has been proposing it. (Senate Democrats) ran on this and were swept into office, so they’re not going to not pass it,” he explained.

The bill refers to abortion as a “fundamental human right,” which is cause for concern, said Gallagher.

“‘A fundamental right’ is a right that could supersede everything, even the right of conscience and religious freedom,” Morgiewicz noted.