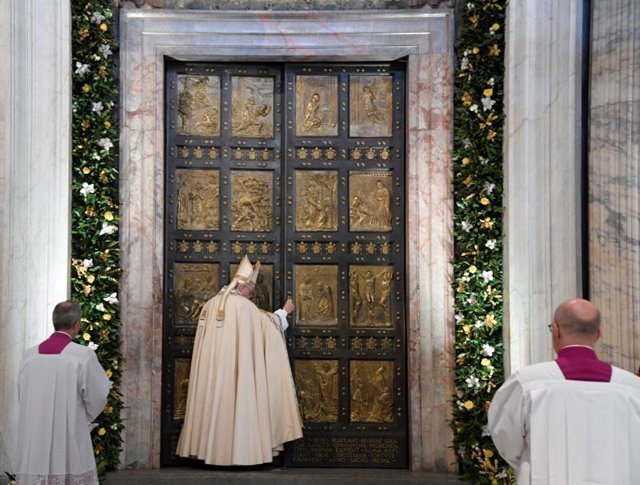 Pope Francis closes the Holy Door of St. Peter's Basilica to mark the closing of the jubilee Year of Mercy at the Vatican Nov. 20.

VATICAN CITY (CNS) — Following Christ the King, whose regal power is love and mercy, means the whole church and each Christian must "follow his way of tangible love," Pope Francis said.

Celebrating the feast of Christ the King Nov. 20 and officially closing the extraordinary jubilee celebration of the Year of Mercy, Pope Francis insisted, "we have received mercy in order to be merciful."

On a warm, late fall morning, St. Peter’s Square was filled with an estimated 70,000 people for the Mass, which was concelebrated by the new cardinals Pope Francis had created the previous day.

The pope and the new cardinals first went to the atrium of St. Peter’s Basilica and gave thanks for "the gifts of grace received" during the Holy Year. Pope Francis then went to the threshold of the Holy Door and pulled each side shut. The door will be sealed until the next Holy Year, which is likely to be 2025.

In his homily, Pope Francis said that even if the Holy Door is closed, "the true door of mercy, which is the heart of Christ, always remains open wide for us."

The power of Christ the King, he said, "is not power as defined by this world, but the love of God, a love capable of encountering and healing all things."

Like the "good thief" who turned to Jesus on the cross and was assured a place in heaven, anyone who turns to God with trust can be forgiven, the pope said. "He is ready to completely and forever cancel our sin, because his memory — unlike our own — does not record evil that has been done or keep score of injustices experienced."

Loving like Christ loves us, he said, means constantly seeking the grace to forgive others, forget the offenses committed and be instruments of reconciliation in the world.

Following Christ the King also means accepting "the scandal of his humble love," which can be difficult because it "unsettles and disturbs us."

Christ’s love, the love Christians are called to imitate, is concrete and tangible and is not concerned with personal comfort, power and superiority.

Even in evangelization "the lure of power and success seem an easy, quick way to spread the Gospel," he said. The Year of Mercy was a call to "rediscover the youthful, beautiful face of the church, the face that is radiant when it is welcoming, free, faithful, poor in means but rich in love, on mission."

Christ the king, "our king, went to the ends of the universe in order to embrace and save every living being," he said. "He did not condemn us, nor did he conquer us, and he never disregarded our freedom, but he paved the way with a humble love that forgives all things, hopes all things, sustains all things."

Christ’s followers are called to continue his saving mission, the pope said.

At the end of the Mass, Pope Francis signed his new apostolic letter, "Misericordia et Misera," (Mercy and Misery), which a papal aide announced was written to affirm that the commitment to sharing the merciful love of God continues because it is "the heart of the Gospel."

The pope gave the letter, which was to be made public Nov. 21, to a group of people representing different sectors of the church: Manila Cardinal Luis Antonio Tagle, president of Caritas Internationalis; Scottish Archbishop Leo Cushley of St. Andrews and Edinburgh, on behalf of diocesan bishops; two priests who were "missionaries of mercy" for the Holy Year; a permanent deacon; two religious women; an extended family; an engaged couple; two women catechists; a person with disabilities; and a person who is ill.