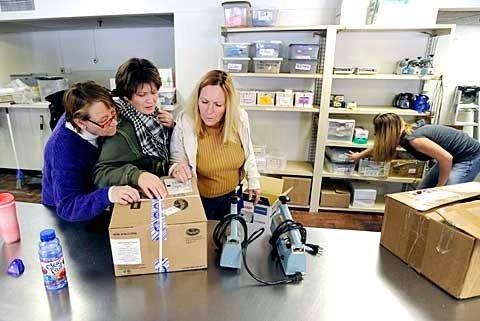 ROCHESTER — Crystal Schmeer said she was still writing chapters in her addiction saga while her friend Connie Chisolm was overcoming incarceration and building a sober life.

When Schmeer didn’t believe it was possible to get a legitimate job after her felony conviction, she looked to her friend’s success with Catholic Family Center’s Healthy Sisters’ Soup & Bean Works program.

Now Chisolm is a Catholic Family Center employee who works as a product expediter with Healthy Sisters.

Schmeer is still taking part in the program and is a quality-control employee, but she hopes to move on soon to a job with a local company, applying what she has learned at Healthy Sisters.

"It’s time for other girls to move in and some to move out and on to the next step," Schmeer said.

These women are just two examples of how Healthy Sisters aims to create productive members of society — and savory soups.

To help accomplish those two goals, a local woman-owned company recently came to the aid of the program. Complemar Partners, a packaging and fulfillment company, has allowed Healthy Sisters to move from its cramped basement quarters on Troup Street to an airy manufacturing space in Complemar’s large Lee Road plant.

"It was an old service space, and it was not conducive to running our enterprise," said Ben Murphy, director of Workforce Development for Catholic Family Center, the department of which Healthy Sisters is a part.

Healthy Sisters moved into Complemar’s location in mid-January and restarted production within about a week.

Murphy noted that the partnership between Healthy Sisters and Complemar arose from discussions between Catholic Family Center president and CEO Carolyn Portanova and Complemar’s Chairman and CEO Christine Whitman. Whitman and her team also consulted with Healthy Sisters on ways to achieve production and shipping efficiencies in the new space. Complemar also was key in the design of new, shorter packaging for the soups that is intended to better fit on store shelves, potentially helping Healthy Sisters to increase sales.

"One thing we are looking forward to with the new space is that we will be able to serve more women," Murphy said.

About 20 to 25 women a year go through the program. Most are referred to the program and have struggled with addictions or poverty, and the majority lack recent work experience. Since it began in 1996 as the Rochester Women’s Bean Project, Healthy Sisters has helped about 230 women.

Chisolm said women in the program are taught that every element of production, from packaging spices to tying ribbons on bags to staffing tables at events, and they learn that each is a crucial step in selling the soup.

When she first started working at Healthy Sisters, Chisolm said she was overwhelmed by the operation, even though she only worked there two days a week.

"It had been so long since I worked or did anything legitimate," she said.

Taking pride in work is one of the lessons that the program aims to teach women, she noted. Each package of Healthy Sisters soup bears the name and writing of the woman who packaged it.

"Your name is on the soup — it’s something you should be proud of," Chisolm said.

EDITOR’S NOTE: Healthy Sisters’ Soup & Bean Works soups are available at area grocery stores, at www.healthysisters.org or by calling 585-546-2784. The program also has a Facebook page and can be found on Twitter at http://twitter.com/HealthySisSoup. In addition to soup customers, the organization could use vehicle donations and volunteers including those who could talk to participants every few months about topics ranging from budgeting to resume writing.