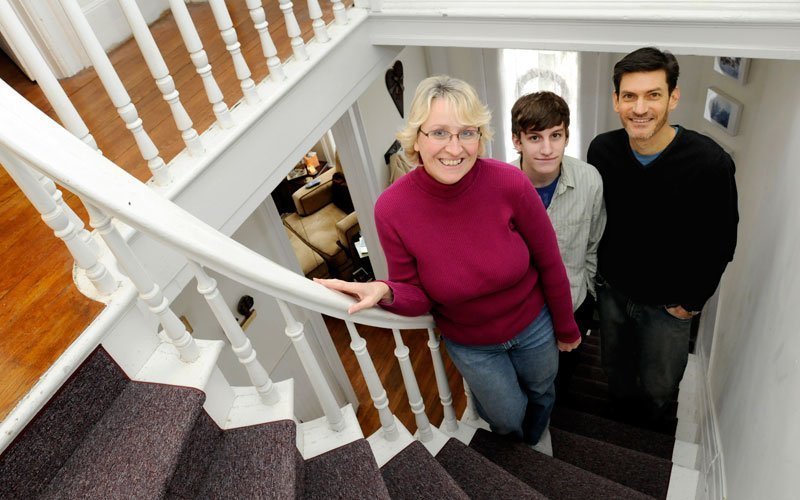 Christina Bishop, her husband David (right) and their 16-year-old son Micah pose inside the Elmira home they purchased in 2007 with the assistance of the First Time Homebuyers Program.

ELMIRA — Renting wasn’t the Bishop family’s first option, but was nonetheless their reality for what seemed like far too long.

David Bishop, his wife Christina, and their four children moved to Elmira 12 years ago. Acknowledging that “for a few years, I didn’t have the best of jobs,” David Bishop said his financial situation eventually improved, but not to the point of affording a house down payment. He said his kids, who now range in age from 16 to 26, began wondering if they’d ever have a home to call their own. He shared their frustration, recalling that “I was tired of paying rent with nothing to show for it.”

In an effort to cross the bridge from rental to homeownership, the Bishops contacted the First Time Homebuyers Program operated by Catholic Charities of Chemung County. With that program’s assistance, their long wait ended in August 2007 when they bought a house on Davis Street, near downtown Elmira.

The Bishops are among nearly 400 families who have benefitted from First Time Homebuyers since it was begun in 1995. It is open to adults of all ages with low to moderate incomes, providing an opportunity for the pride and satisfaction of home ownership that might not have otherwise been possible.

The program utilizes purchase-assistance funds, obtained through a partnership with the City of Elmira, to cover down payment and closing costs. All houses must be within city limits. Mortgages are obtained through area lenders, making First Time Homebuyers a win-win program for all involved.

Jane Galvin, program coordinator, said the program’s general goal is to secure a 20-percent down payment. Most buyers obtain residences in the $50,000 to $65,000 range.

To cope with the often daunting financial and legal issues involved in first-time homeownership, participants are required to attend educational workshops during the prepurchase period. There, they receive guidance on such topics as budgeting, saving, how to work with real-estate agents and lenders, and what to look for during a home inspection.

Postpurchase stipulations exist as well: Buyers must join a homeowners’ association, attending several meetings within the first year of ownership. Sessions cover budget reviews and adjustments, responsibilities of home maintenance, and involvement with neighborhood projects and other community ventures.

“It’s a really well-rounded approach. First and foremost is education,” said Galvin, who previously coordinated Catholic Charities’ Mortgage Foreclosure Prevention Service. She added that the foreclosure rate is less than 3 percent for people who have been through the First Time Homebuyers Program.

This local Catholic Charities success story recently led to national attention: An article profiling First Time Homebuyers, written by Galvin, appeared in the winter 2008-09 edition of Charities USA, the national Catholic Charities magazine. For those who didn’t catch that article, they need only to chat with David Bishop to be convinced of the expertise and support offered by program officials.

“They really care. They don’t want to see you lose something you’ve worked so hard to get. If there is a problem, they want to know about it,” he said.

Thus far, problems have been few for Bishop’s family in their new home. He recalled that the day they moved in, they rejoiced in the fact there were no longer landlord issues such as restricting what color the bedroom walls were painted.

“It was a very emotional moment when we came into this big empty house, and could do what we wanted to,” he remarked. “We’re loving it.”