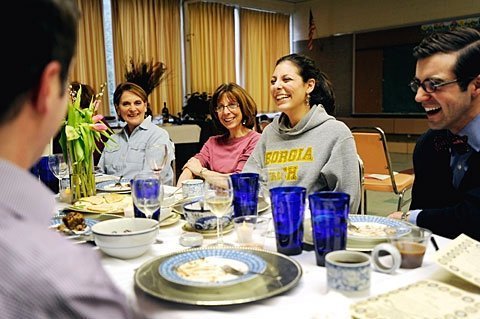 Beverly Benassi (from left), Marie Leo, Joanna Leo and Josh Mull laugh as they tell stories during a March 30 meeting of "Cook, Eat, Pray" at St. Mary's Church in Waterloo.

WATERLOO — The kitchen was quiet except for the soft murmur of casual conversations and the bubbling of a large pot of pasta boiling away on the stove.

Fifteen minutes earlier the kitchen of the St. Mary/St. Patrick Parish Center — the former St. Mary School building — had seen a flurry of activity as a dozen people in aprons scurried around chopping vegetables, toasting pita bread and mixing cake batter. Now, however, most of the work was done, and the cooks chatted around the large kitchen’s butcher-block island, wine glasses in hand, as they waited for the pasta to finish cooking.

The cooks had come to the parish center that evening, March 30, for the third installment of Cook, Eat, Pray, a program started several months ago by Marie Leo, faith-formation coordinator for St. Mary in Waterloo and St. Patrick in Seneca Falls. Leo stumbled across the idea while brainstorming ways to use her own gifts and talents to encourage parishioners to become more active in the clustered parishes, she said.

"Since I love to eat as much as I love to cook, I thought there might be others who would enjoy coming together to do the same. As luck would have it, the popular book and movie, ‘Eat, Pray, Love,’ had been released around the same time, so I just borrowed a bit from the title," explained Leo, who said she has not yet read the book or seen the movie.

Food and spirituality are closely linked, Leo said, noting that nearly every organized religion pays special attention to certain types of foods to eat or to avoid.

"The direct effects food has on spirituality vary from fasting to preparing special meals at various occasions and events throughout the year, which bring family members as well as communities together," she added.

Cook, Eat, Pray participants typically meet around 4:30 and begin preparing the foods that will be used for that evening’s meal, said Leo, who chooses the recipes and sets up work stations in the parish center’s kitchen ahead of time. Dinner is usually ready by 5:30 or 6, and participants pray together before eating their meal at a long table set up in a classroom across the hall from the kitchen. After the meal, participants pray again before returning to the kitchen to clean up.

"Many hands make light work," Leo said. "Most of us like to cook, but there are particular individuals who like to do dishes, so we make sure they come."

When the last dish has been washed, dried and put away, parishioners return to the classroom for more prayer and reflection before wrapping up around 8 p.m.

Each participant receives a copy of all the recipes used each evening, as well as some information on the spirituality of food, Leo said. Each of the three Eat, Cook, Pray evenings held thus far has been well-received, she added.

Ed Zmuda said he and his wife, Joyce, have participated in all three evenings, and plan to continue participating in the future.

Zmuda said he’s also grateful for the opportunity for St. Patrick parishioners to build relationships and camaraderie with St. Mary parishioners. Such opportunities are valuable, said Father Jim Fennessy, pastor of the two parishes, which clustered in 2007.

"If you can get the people eating together, then I think that makes it a lot easier when it comes to the praying together," Father Fennessy said.

Cook, Eat, Pray draws participants of all ages, so it gives older and younger parishioners the opportunity to form friendships with each other, added Beverly Benassi.

"I think that’s wonderful, because a lot of times the younger people don’t get involved," Benassi said.

Four of the young people that regularly attend Cook, Eat, Pray are Leo’s daughters, Joanna and Sarah, along with Sarah’s husband, Joseph Mull Jr., and his brother, Josh Mull.

"I like it, not only because my mother-in-law puts it on, but because it brings us, the older generation and the younger generation, together for the same reason," Joseph Mull said. "You share your own stories with each other, and there are a lot of things you can relate to. It’s always been a real positive experience every time."

Many of the participants have attended all three sessions so far, so they’ve developed great friendships, he said.

Cook, Eat, Pray sessions usually fall on Wednesday evenings, and Joanna Leo said the evenings provide a refreshing break from the daily struggle of deciding what to have for dinner after busy workdays.

"I feel like sometimes you get caught up in the hustle and bustle of the week," she said. "It’s nice to take time out from that, and make time for your faith."