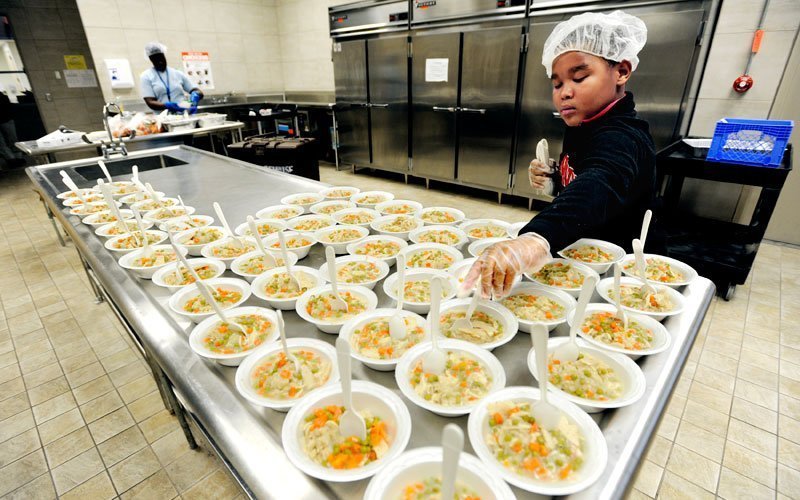 ROCHESTER — A boy who last year came through the Thomas P. Ryan Community Center afterschool recreation program — which offers city children a daily snack and hot meal — was known to eat food off the ground and even jump into Dumpsters looking for something to eat, according to staff members.

It’s an extreme example but illustrates the childhood hunger crisis that persists in the Rochester area and throughout this country, say city officials and representatives from area food programs.

According to a report released early this year by the Food Research and Action Center, in 2009 nearly one in four U.S. households suffered food hardship — meaning there were times that a family did not have money to buy food at some point in the past year. The people in these households who responded to the center’s study reported food hardship at a rate 1.62 times that of other households, 24.1 percent for households with children vs. 14.9 percent for households without children. The report can be found at http://frac.org/pdf/food_hardship_report_2010.pdf.

It’s a crisis that continues to plague communities in the Rochester region despite the large number of food pantries and meal programs available to families, which is why this past summer Rochester officials tried to increase awareness about its meal programs for children. Additionally, the Foodlink network purchases food and delivers it to more than 500 agencies in 10 counties. Last year, more than 5 million pounds of food was distributed through this network. And Foodlink also provides several meals programs for children — at recreation centers, churches and other organizations — that in the past year provided 200,000 meals in the community, according to the Foodlink enterprise Freshwise Catering (www.freshwise.org/Freshwise_catering/child_nutrition.html).

Ifeyinwa Obieke, a Monroe Community College student, sees the statistics brought to life daily, as she often sets up the meals for the children at the Ryan center. During the distribution of the meals on Sept. 22, Obieke made sure as the children went through the line they took all three components: milk, fruit and chicken/brown rice soup.

Those children who are going hungry at home do not come out and tell her that, but they don’t have to, she said: It’s the child who comes back through the line for seconds for a meal that’s not very appetizing to a majority of the kids, she noted, or the child who asks her if dinner will be served immediately when he walks into the center on a Saturday.

“A lot of them look drained out, like they haven’t eaten,” she noted.

Center director Hector Arguinzoni said the program currently provides about 60 meals, but that will quickly spike once parents start re-enrolling their children for the program. Last year, the center fed more than 100 children daily. All of the city’s recreation centers distribute the meals that are prepared and delivered by Foodlink as part of the organization’s Kids Caf√© program, which provides meals to children at 62 sites in the city and surrounding counties. Kids Cafe is a national effort that’s been in place since the 1990s. Students automatically qualify for Foodlink programs if 50 percent or more of children in a school district are eligible for free and reduced lunches, said Jeanette Batiste, chief operations officer for Foodlink. In Rochester, 88 percent of students qualify for the federally funded lunch program.

“Most of the time, we believe that’s their hot dinner,”Batiste said of the afterschool programs. “We take it seriously and do our best to make sure it’s a nutritious and well-balanced meal.”

The need for these programs goes back to the root cause of hunger, which is poverty, said Jackie Campbell, assistant commissioner for the city’s bureau of youth services. In Rochester, 49.8 percent of households headed by women with children younger than 18 live below the poverty level, according to newly released Census information at http://factfinder.census.gov.

In addition to meal programs and food banks, one of the most successful anti-hunger programs locally and nationally is the federal Food Stamp Program, said Sue Segelman, nutrition outreach and education coordinator for Monroe County Legal Assistance Center. About 40 million low-income individuals in the United States receive food stamps, with 75 percent of these participants living in families with children, according to the World Hunger Education Service. Many of the fresh produce markets locally accept Food Stamps, Segelman said, which are now distributed through an electronic debit card.

When families fail to access these programs, a cycle of poverty leads to poor nutrition habits, Campbell added, which also lead to negative health consequences of obesity or diabetes in children.

“Generations of kids have not had access to nutritious foods, so a lot of kids are growing up (without these foods) now even though it’s available,” she said “Parents don’t know what’s healthy. We tend to think it’s this new phenomenon of people. Everybody’s busy and everybody’s working two or three jobs and all this. But hunger, especially in low-income communities and how it affects children, goes back for eons and so over the long term you can see the effects.”

Some basic physical effects for children include a lack of proper development, which leads to weak muscles, teeth and bones, said Luis Burgos, commissioner of Rochester’s recreation and youth services department.

“How do we expect a child to perform in sports or recreation?” he added. “When a child is hungry, how can he concentrate?”

Other social consequences can include older children turning away from school to find sources of income to feed themselves, Campbell remarked.

“You have many children in families of working poor who are home alone in the afternoon,” she said. “They’re not getting meals and they’re not being motivated to do a lot of things. They’re not prepared in terms of doing their homework and being prepared the next day. … If I was a kid and I was hungry, I don’t want to hear about doing my math fractions. I want somebody to tell me what I’m going to eat.”

That sense of desperation is what can lead older children into trouble, Burgos added.

“A hungry child is not going to be a cooperative child,” he said. “He’s going to be an irritable child, possibly an angry child. They know they’re hungry. … And that’s going to affect their behavior. If you’re hungry and once you’re a teen, not only have you suffered physically and emotionally, you might be inclined to do certain things to get fed and to get food on the table. It might be expeditious but you end up with other problems.”

To increase community awareness and help avoid such situations, Burgos worked on promoting the city’s Summer Meals program through media tours of the Ryan center in July. He said that most community meal programs have a larger capacity than what’s being utilized, and Batiste noted that Foodlink’s new kitchen at the former Pepsicola plant on Joseph Avenue can prepare up to 5,000 meals.

Community awareness also needs a boost overall regarding childhood hunger during the summer months, Burgos and Batiste agreed. One study showed children actually gained weight because they did not have access to wholesome, nutritious meals on a regular basis during the summer, said Rachel Pickering from the Finger Lakes Health Systems Agency.

“Though it seems counterintuitive … kids are actually going back heavier to school after the summer,” she said.

What many people also fail to realize is that families turn to food banks and food pantries more in the summer than in the fall or winter when many groups or organizations hold food drives, Batiste observed.

“What (people) forget is when the kids are out of school and they’re not eating the free and reduced lunches, they’re eating at home,” she explained. “So even if you start taking a household of two children and $2 a meal and you start adding it up over the course of the month. Then, take that and divide it into what would be the average annual income of a household and you see percentagewise what that means.”