As a former elementary-school teacher, MaryAnn Bender is no stranger to the sight of children kicking up their heels on playgrounds.

Nonetheless, the scene she encountered on a rusty playground in Nicaragua in October 2015 stood out to her at the time and remains a vivid memory.

"There were about 40 kids. It was recess and they were all playing with one deflated soccer ball," recalled Bender, who belongs to St. Francis and St. Clare Parish in Waterloo and Seneca Falls. 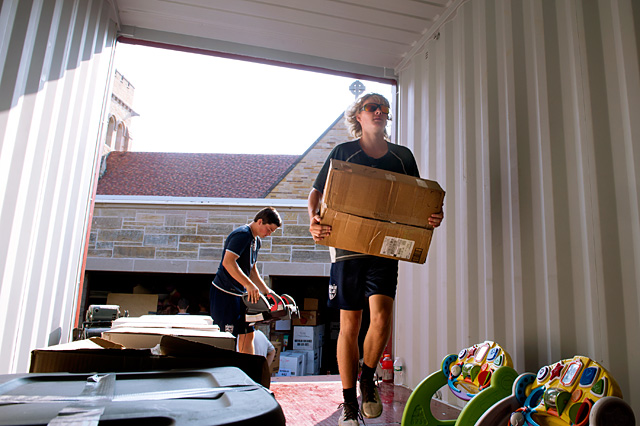 Cody Reagan helps in loading the hundreds of boxes of donated goods into the back of a tractor trailer truck to be shipped to Nicaragua Aug. 20.

That scene made Bender think about boxes and bins full of sporting goods that many children have at their fingertips and in their garages. She decided right then and there that she would encourage her fellow parishioners to think about the Nicaraguan children and their deflated soccer ball as they were gathering items to donate to the parish's Nicaragua Project this year. Through this project, members of the parish and the surrounding community donate used household items, school supplies, clothing, shoes, rototillers and medical supplies to needy people in Nicaragua.

Parishioners and members of the Waterloo and Seneca Falls communities responded with enthusiasm, Bender said. Boxes filled with toys and sports equipment were among the 1,500 boxes loaded onto trucks and shipped to Nicaragua recently at the completion of this year's Nicaragua Project.

"This has been our busiest year ever," Bender said.

Members of St. Francis and St. Clare parish's social-ministry committee have been spearheading the Nicaragua Project for 22 years, and although the project began with the parish, it has evolved into a communitywide effort, Bender said. Each year Bender and fellow parishioner Mary Grace coordinate the project and publicize a list of items they're seeking to have donated. Between May and August people throughout the community drop off their donations at a designated green shed outside Finger Lakes Collision on Routes 5 and 20 or at the garage behind St. Patrick Church in Seneca Falls, which is one of the parish's two worship sites.

Each Saturday morning during May and August -- and occasionally during the week as well -- volunteers gather at the shed and the parish garage to sort and box the donated goods, Bender said. In late August, more volunteers load the boxes and any donated furniture and rototillers onto a tractor trailer and several smaller trucks bound for Nicaragua. All of the items loaded onto these trucks are used to support a larger project known as the Nicaragua Mission. This project is run by Ann Marie Zon, a lay missionary from the Buffalo area who spends more than six months of each year living and serving the needy in Nicaragua.

"I would say she is another Mother Theresa," Bender said of Zon. "She's worked in Nicaragua over 30 years and everybody is just so inspired by her."

Volunteers, including members of Mynderse Academy's boys' soccer team, loaded the donated items onto the trucks on Aug. 20. It costs $5,000 to send a loaded tractor trailer to Nicaragua, so at its Aug. 20-21 Masses the parish took up a collection to help defray this expense. Zon traveled to the Finger Lakes region that weekend and spoke about the mission at all the parish's Masses that weekend as well, Bender said.

"She speaks from her heart. She lives that (Nicaraguan) life herself, too, and shares that life with us," Bender said.

Bender herself has seen firsthand what life in Nicaragua is like. She traveled to Nicaragua in October 2015 with three other people from St. Francis-St. Clare Parish and stayed with Zon. The parish contingent witnessed the positive effects their donations had on those who received them and were touched by the Nicaraguans' faith and joy.

"They're very religious people, very happy people. They're really grateful for everything," Bender said. "It made all the hard work up here worthwhile. You just felt like you knew it made a difference in their lives."