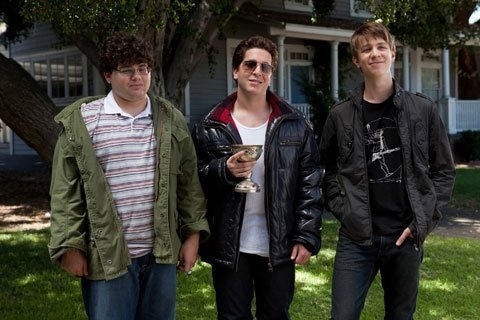 NEW YORK (CNS) — Put religion in retreat, erode ethics and let materialism run rampant, and what kind of entertainment will you get? The short answer is "Project X" (Warner Bros.).

Desperate to become popular and, of course, to have animalistic sex with random strangers, the trio throws a decadent party that eventually morphs into a destructive riot. That last word is not used metaphorically. The proceedings — which we’re supposed to be viewing through the camera of another adolescent, gloomy Goth Dax (Dax Flame) — eventually involve a flamethrower, a fire department helicopter and a police SWAT team.

The outcome of it all? Not only do the lads gain the admiration of their high school peers, at least one of their parents, surveying the devastation they’ve wrought the morning after, implicitly congratulates his son, whom he had earlier labeled a loser.

If that sounds harsh, it’s because the only bond of affection that means anything to these characters is that which unites Thomas and his dog. Naturally, Thomas is also given a love interest in the person of his friend-turned-hook-up-partner Kirby (Kirby Bliss Blanton). But Thomas’ capability for committed relationship building seems to run about as deep as Kirby’s diaphanous good looks.

Still, Thomas is at least marginally sympathetic. Not so the leering, acerbic Costa. Though he makes reference, in passing, to his Jewish heritage, Costa is the embodiment of neopagan barbarism — a swilling, drug-loving 18-year-old lout anxious to pillage and fornicate, if not rape, his way through Left Coast suburbia.

Indeed, taken as a whole, Nima Nourizadeh’s first feature serves as a collective portrait of soulless, over-privileged zombies wandering a world of sterile secularism, enslaved by their basest passions. As such, it’s anything but funny; in reality, it’s grotesquely tragic.