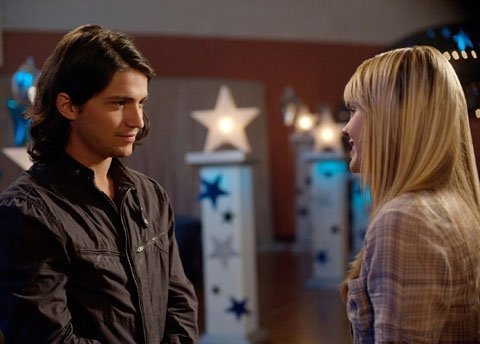 NEW YORK (CNS) — Like the rite of passage for which it’s named, "Prom" (Disney) — a wholesome but ho-hum high school-set romantic comedy — conjures opportunities and problems that seem to matter a great deal more to its youthful participants than to more mature outside observers.

Still, if the characters onscreen appear to have little to worry about, the same can also, fortunately, be said for parents dispatching or accompanying youngsters to director Joe Nussbaum’s low-key, carefully choreographed social square dance.

Do-si-doing their way through the buildup to the big night — as they discover, renew or lose love — are a variety of teen couples led, in a classic case of attracted opposites, by clean-cut class president Nova (Aimee Teegarden) and mild bad boy Jesse (Thomas McDonell).

Nova — who seems destined to be her alma mater’s answer to Martha Stewart, or perhaps Albert Speer — has devoted so much time and attention to prom preparations that she’s crushed when the storage shed housing all the decorations goes up in smoke. And things seem to only get worse when the principal, as a means of punishing the rebel, assigns brooding, motorcycle-riding Jesse to be her helper in the Herculean task of reconstruction.

Despite the chopper — and a haircut reminiscent of Arlo Guthrie, circa "Alice’s Restaurant" — Jesse turns out to be an OK guy who, in turn, discovers all the virtues initially hidden by Nova’s emotional corset stays.

Concealing something else is Mei (Yin Chang), the distaff half of the school’s longest running duo. Mei can’t bring herself to tell her boyfriend Justin (Jared Kusnitz) that she’s been accepted to a college she fancies more than the one they had planned to attend together.

Then there’s goodhearted music nerd and promising lacrosse player Lucas (Nolan Sotillo). Not to be held back by his peas-in-the-pod friendship with even dorkier Corey (Cameron Monaghan) — who likes the same bands, but lacks coordination — Lucas aspires to win the affections of his fetching classmate Simone (Danielle Campbell). To do so, however, he’ll have to overcome the rivalry of the lacrosse captain himself, Tyler (De’Vaughn Nixon).

Well, this is the movies after all.

Though Katie Wech’s script varies what often feels like trivializing realism with such Hollywood flights of fancy, it does gather some emotional momentum as it proceeds. And the closest thing to problematic material comes with a brief dust-up between Jesse and a trio of louts who harass his mother at the diner where she toils as a waitress.

"Prom," in sum, registers as appropriate and agreeable — if not especially enthralling — entertainment for all.