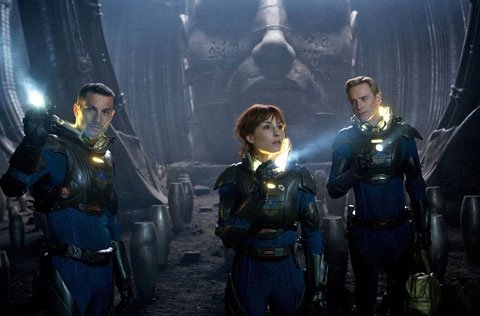 NEW YORK (CNS) — In 1979, director Ridley Scott staged a memorable collision between horror and science fiction in deep space. Over three decades later, he circles back to the "Alien" franchise in a 3-D prequel entitled "Prometheus" (Fox).

Scott made "Alien" standing on the shoulders of filmmakers such as Stanley Kubrick ("2001: A Space Odyssey") and Andrei Tarkovsky ("Solaris"); he went on to direct the equally influential "Blade Runner." Alas, this attempt to build upon that legacy and create another original work is too profound by half.

Unsurprisingly, given his knack for crafting popular entertainment, it has enough substance and spectacle to be intriguing and immensely profitable. Yet it’s the opposite of enlightening. What jumps out is the movie’s rejection of a fundamental tenet of theism, namely, the belief that God created the human race. This element — combined with significant violence and offensive language — renders "Prometheus" extremely problematic for viewers of faith.

In the year 2093, scientists Elizabeth Shaw (Noomi Rapace) and Charlie Holloway (Logan Marshall-Green) want to test a theory about the origins of human life based on drawings found at six archeological sites on Earth. Aboard the spaceship Prometheus, the romantically involved pair awake from cryogenic sleep as the vessel approaches an unnamed planet where they believe the evidence lies.

Meredith Vickers (Charlize Theron) oversees the mission on behalf of its financial backer, Peter Weyland (Guy Pearce). In addition to its human crew, the Prometheus carries an android called David (Michael Fassbender). While the humans slumbered during the two-year journey, David has been learning as much as he can about everything he can. He’s a cross between "Star Trek’s" Mr. Spock, a super-efficient butler, and Lawrence of Arabia, whom he’s come to admire after watching the 1962 epic.

Landing on the desolate planet, the team discovers a large edifice containing remains of the giant beings dubbed "engineers," whom Shaw and Holloway postulate gave life to man. A dark primordial sludge is also present, along with worms and serpents akin to the signature reptilian parasites from previous "Alien" movies.

There’s evidence to substantiate the scientist’s hypothesis — they will literally meet one of their makers — but the ensuing devastation short-circuits the quest for answers to even deeper questions. Many meet grim ends, and in the most grueling scene an alien is surgically extracted from Shaw.

The special effects are first-rate — transfixing without being overwrought. But Jon Spaihts and Damon Lindelof’s script is both simplistic and muddled. Key pieces of information are glossed over. At other times, the dialogue spells out too much. The images and action, riveting though they may be, don’t carry enough weight; often we’re told things we should be shown.

Fassbender is outstanding as David. And Rapace, star of the Swedish-language version of "The Girl With the Dragon Tattoo," makes Shaw a worthy predecessor of Ripley, the heroine of "Alien."

Shaw’s faith, signaled by the cross she treasures, is the primary means by which the movie tries to hedge its bets vis-a-vis religion. Her desire to know why the "engineers" chose to fashion mankind isn’t quenched. Moreover, how they themselves came into being isn’t explained. According to the film, this allows for the possibility that a Creator exists whom Christians and other deists can accept.

Dramatically and theologically, it’s a weak argument: too little and too late. We knew going in Ridley Scott was a shrewd commercial filmmaker rather than an auteur with great artistic ambition. Judging by "Prometheus," he’s not a coherent cosmologist, either.

The film contains considerable grisly sci-fi violence, several instances of rough language, much crude and crass language, significant profanity, some sexual references and innuendo, nonexplicit relations between an unmarried man and woman, one use of marijuana, and some alcohol consumption. The Catholic News Service classification is O — morally offensive. The Motion Picture Association of America rating is R — restricted. Under 17 requires accompanying parent or adult guardian.