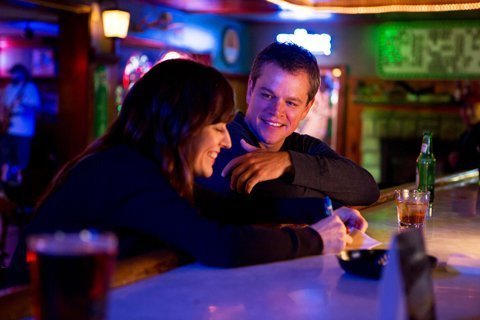 To some, fracking represents an easy path to energy independence for the United States — and to vast wealth for those landowners lucky enough to have the proper deposits lurking below their soil. To others, it threatens the ruin of whole swaths of previously healthy countryside through the inevitable contamination of water sources.

On screen, the cards are indisputably stacked in favor of the latter view.

Steve Butler (Matt Damon) and Sue Thomason (Frances McDormand) are a duo of energy company executives out to convince down-on-their-luck farmers in a rural Midwestern town to sell their land to the corporation. Their offer includes a percentage of future profits they glibly promise will transform the townsfolk’s lives.

When the pair encounters opposition from Frank Yates (Hal Holbrook), a retired science professor, and from personable environmentalist Dustin Noble (John Krasinski), who launches a fervent campaign to thwart them, Steve begins to have second thoughts. His change of heart is also driven by his attraction to Alice (Rosemarie DeWitt), a local teacher whose regard Steve comes to value.

A gifted cast and smooth direction by Gus Van Sant help to disguise some obvious flaws. These include the homespun, all-too-pat wisdom spouted by Frank — though consummate pro Holbrook, to give him credit, almost pulls these moments off — as well as a late-reel plot twist that’s nothing short of paranoid.

Fundamentally, though, there’s no escaping the simplistic perspective and unmistakable anti-business bias underlying Damon and Krasinski’s script. Moviegoers committed to scriptural values will, of course, appreciate the prioritizing of stewardship over greed. But the proper balance between the two may appear quite different when viewed from a failing Iowa homestead rather than a Malibu beach house.

The film contains about a dozen uses of profanity and much rough and crude language. The Catholic News Service classification is A-III — adults. The Motion Picture Association of America rating is R — restricted. Under 17 requires accompanying parent or adult guardian.