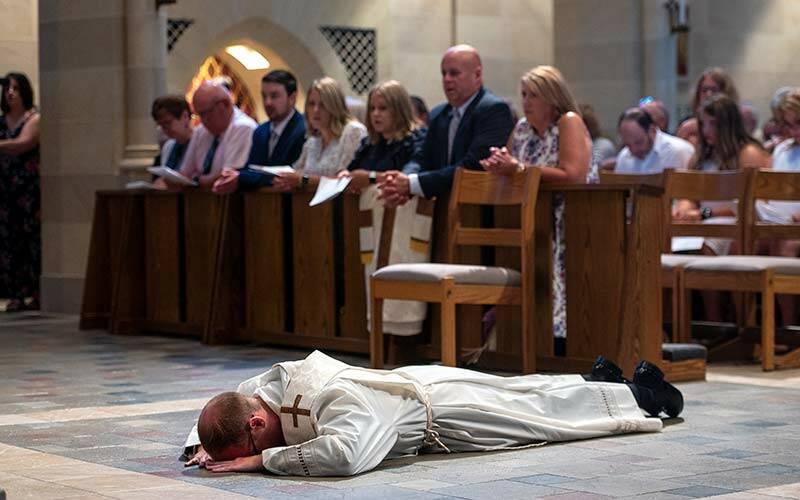 ROCHESTER — It’s arguably the most visually striking moment of an ordination Mass — yet one in which the principal figures can’t see anything.

Just minutes before he was ordained a priest of the Diocese of Rochester July 2, Father Aaron Kelly stretched himself out, face down, on the floor of Sacred Heart Cathedral. He remained in that position for some time as the Litany of the Saints was recited.

Prostration is a rare and powerful gesture at Catholic liturgies, performed only by those being ordained priests or deacons, or by priests and deacons at the start of the Good Friday liturgy.

An ordinand’s act of prostration “symbolizes his unworthiness for the office to be assumed and his dependence upon God and the prayers of the Christian community,” according to an explanatory document from the U.S. Conference of Catholic Bishops.

Giving up the self

“There’s a lot that’s going on in that moment,” Father Kelly noted. “The prostration is a beautiful image, because it points to the reality of the self-emptying that is involved in ordination; that the priest (or) the deacon, by virtue of being ordained, no longer lives fully for himself and really pours out his life in service to others — gives himself in complete service to the church, to the people of God and to the ministry that he’s been called to. And so, in a really powerful, visible way, when he goes onto the ground he’s giving up of himself. And then, when he rises at the end of the prostration, at the end of the Litany of the Saints, in a way he rises into something new — into a new way of life.”

At his transitional deacon ordination in August 2021 and his more recent priestly ordination, Father Kelly lay prostrate during the Litany of Supplication midway through Mass. Then, Bishop Salvatore R. Matano — along with other clergy assembled and the rest of the congregation — prayed the Litany of Saints, calling out to the saints for their strength and support and asking them to intercede to God on Father Kelly’s behalf.

Father Kelly noted the profound sensation of prostrating himself, recalling “that moment of being face first on the cathedral floor, the feeling the weight of the office I was undertaking.” Yet he said he felt comfort while listening to the names of many saints being recited — “the peace that came from knowing that all of heaven was interceding, that all of those behind me in the cathedral were praying for me at that moment.”

Prostration is often cited by newly ordained deacons and priests as a deeply memorable part of their ordination Masses. For instance, Father Michael Fowler said in 2014 that he sensed an intense spiritual presence while lying prostrate during his ordination as a transitional deacon.

“When the nose hits the marble, there’s something going on there,” said Father Fowler, who now serves as pastor for the cluster of St. Agnes, Avon/St. Rose, Lima/St. Paul of the Cross, Honeoye Falls. “God is doing for us what we can’t do for ourselves.”

A rare but profound act

Prostration is mentioned numerous times throughout the Bible, often as an act of humility during significant moments. In Genesis 17:2-3, for example, Abram falls face down upon being told by God that he will establish a covenant between them. In Matthew 17:6, the disciples fall prostrate in terror upon hearing God’s voice during Jesus’ transfiguration. And in Matthew 26:39, Jesus himself “advanced a little and fell prostrate in prayer” during his agony in the garden.

The fact that prostration occurs so infrequently in present-day liturgies is actually a testament to its importance, Father Kelly observed.

“(Prostration) comes at extremely significant moments, intense moments of prayer. And so it kind of draws our attention to that — that this is not just something that we normally experience, this is not something that happens every day,” he explained.