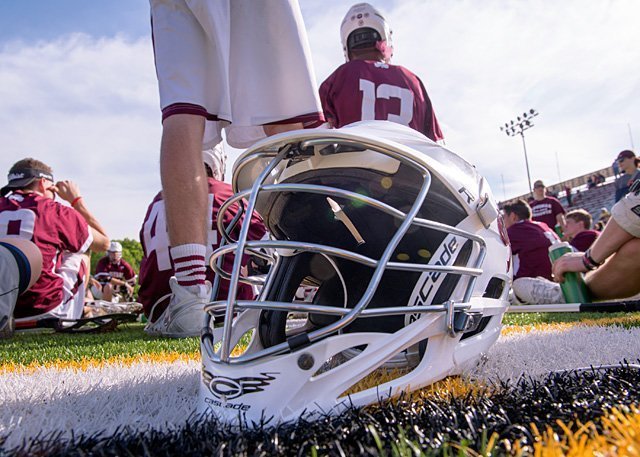 A lacrosse helmet sits on the field during the Section 5 championship at St. John Fisher College in Pittsford June 1. Lacrosseis one of several high-school sports whose players report the most concussions.

After getting their “bells rung,” high-school athletes of prior decades may have shaken it off and returned to the field.

In recent years, however, as local and national attention has focused on the potentially long-term consequences of traumatic brain injury — also known as concussion — medical experts and advocates have emphasized the need for prevention and immediate treatment of such injuries.

Beginning in 2012, for example, the New York state Education Department issued regulations and protocols to protect athletes on school teams. The state’s protocol requires coaches, physical education teachers, nurses and certified athletic trainers to obtain certification every two years in an approved course on concussions and concussion management, according to information at nysed.gov.

“Your kid has one brain; you have to take care of it,” said Pam Mapstone, a nurse practitioner with the University of Rochester Medical Center’s Sports Concussion Clinic. “Things that happen now can potentially affect them in the future. The good news is you can recover. … It is an injury that can be rehabilitated. A kid can get better and get back to the sport.”

The key to avoiding more serious complications is for parents, coaches and schools to treat athletes’ head injuries immediately and appropriately, she noted.

“Concussions are only bad when you don’t take them seriously,” Mapstone said.

She explained that concussion diagnoses are based solely on symptoms a person exhibits after a head injury, which may include the following:

* Sensitivity to light or noise

Although no test, scan or X-ray is currently able to diagnose a concussion, Mapstone said CT scans are sometimes conducted on those with suspected concussions to ensure there is no bleeding on the brain or other complication.

Also working at the URMC concussion clinic is Dr. Jeffrey Bazarian, an emergency-room doctor who developed an interest in treating concussions and has been researching a blood test to diagnose them, she explained.

Such a blood test, which Mapstone said she expects to become available in her lifetime, would provide a concrete answer as to whether a person has a concussion. A definitive diagnosis is especially valuable when an athlete may have suffered more than one concussion. If in a short period of time (three months or less) an athlete has sustained three concussions that altered his or her cognition — causing loss of consciousness, significant confusion or memory loss — doctors at the URMC concussion clinic will bench the player for the season, she said, noting that guidelines for sidelining an athlete vary among medical practices.

When it comes to diagnosing concussions, “We are always erring on the safe side,” Mapstone added. “When you’re dealing with the brain, it’s better to be safe.”

Student safety also is paramount in the concussion protocols established by New York state, noted Matt Thomas, who is going into his fourth year as athletic director at McQuaid Jesuit High School.

“Any blow to the head is treated as a possible concussion,” he said. “In a nutshell, ‘When in doubt, sit them out.'”

Treatment for concussions may include physical, occupational or ocular therapy or medication, Mapstone said. Generally, an athlete diagnosed with a concussion should rest and gradually resume normal activities as he or she feels better, she said.

The Centers for Disease Control and Prevention has estimated that between 2001 and 2009, the number of children and adolescents ages 19 and younger who were treated in emergency departments for concussions and other traumatic brain injuries related to sports or recreation rose 57 percent from 150,000 to 250,000, according to information at http://bit.ly/Y573e0.

Two years ago, the CDC created the HEADS UP Concussion in Youth Sports Initiative to provide training on preventing, recognizing, and responding to concussion for coaches in school and recreational sports leagues, according to cdc.gov. The HEADS Up Program also offers certification for coaches in travel leagues such as CYO, noted Alison LeChase, diocesan coordinator for sports and Scouting.

Having received her certification last spring, LeChase said she is now requiring that all CYO coaches go through the program when they renew their coaching certifications, she said.

Mike D’Aloisio, head football coach at Notre Dame High School in Elmira for the past 35 years, said his coaches and players undergo the HEADS UP training as a matter of course. But he feels football gets a bad rap when it comes to concussions, due in part to national headlines about lawsuits professional players have filed against the National Football League.

“When professional athletes talk about all this stuff, they’re talking about the level they made it to, and that’s 30 years of constant pounding,” noted D’Aloisio. “The values and life lessons you learn from playing high-school football far outweigh … any negative aspects.”

Those values include teamwork, goal setting and self-discipline, he said.

“All those things are going to benefit you long after you leave the playing field,” D’Aloisio said.

While football may receive more media attention, Mapstone said football, lacrosse, ice hockey and soccer players report the most concussions. Surprisingly to some, soccer players’ head injuries most commonly occur from hitting another player or falling on another player while trying to hit a ball with their heads, she said. Mapstone and D’Aloisio noted that cheerleaders also sustain concussions, particularly when they are on the bottom of pyramids and are hit by falling teammates.

But it is the national spotlight on football that has helped advance training about concussions with more focus on technique and safety, D’Aloisio added. As a coach, he said he took safety one step further decades ago by eliminating full contact during practices, and that other schools followed suit. He said he also has been fortunate since 1989 to have an athletic trainer on the sidelines with him, and that he defers to the trainer when students get hit.

McQuaid, meanwhile, partnered with URMC nearly a decade ago to provide training in regard to head injuries that in the past may not have been taken as seriously as they should have been, said Thomas, who has coached rugby since 2005.

“We were very early on educating coaches,” Thomas said. “Now, we’ve learned to educate the entire school community that you could slip and fall in a hallway. So, it’s not necessarily that concussions have increased, just our awareness and diagnosis of them.”

The most important aspect of a student athlete’s recovery from a head injury concerns when he or she should return first to academics and later to sports, Thomas noted. Per state regulations, schools must follow specific guidelines to gradually return a student to the classroom or the field based upon a doctor’s recommendation, he and Mapstone noted.

McQuaid officials follow a “return to learn and return to play” protocol for students returning to the classroom and athletics following head injuries, Thomas said, noting that parents have at times disagreed with delaying a student’s return to the field. One time, he recalled, the school stuck to the protocol even though a doctor had approved a student’s return to his normal schedule.

To help determine whether a player is ready to return to athletics, Thomas and D’Aloisio said high schools put athletes through a series of physical and mental exercises, called IMPACT (Immediate Post Concussion Assessment & Cognitive Testing). The results of this test, which is recommended by the state, are compared to baseline tests given to students at the beginning of the season before any injuries have occurred. Students cannot return to play until they receive their doctors’ OK and also pass IMPACT, the coaches said.

“Sports is a privilege, not a right,” Thomas remarked. “I tell parents and students, academics is the main focus at McQuaid Jesuit. … Part and parcel of that is the health and safety of the student.”

One football league in Auburn similarly has decided that the health and safety of its younger children is paramount and is offering an alternative to contact play.

“A lot of little kids aren’t ready for the brutality of football yet,” said Matt Moskov, a St. Alphonsus parishioner who runs the league. “This gives them an introduction to the game so they develop a love of the game.”

He noted that the focus is on fitness and fun, as well as teaching technique and strategy.

“Those are the building blocks they can carry forth as they get older,” Moskov said.

Moskov said that in an effort to prevent head injuries, tackling techniques have changed since he played high-school football. The Seattle Seahawks led the move to eliminate the head-first approach to tackles, he said, noting that improved training strategies also include exercises for the neck muscles.