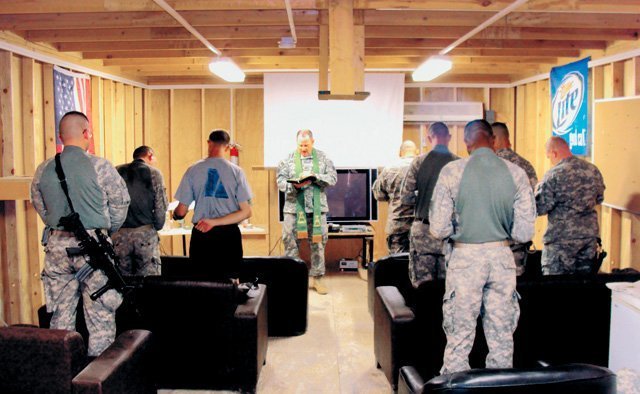 Father Patrick Van Durme (center) presides at a service for U.S. soldiers near Mosul, Iraq, in 2010.

From coming dangerously close to combat in Iraq to hearing stories of wartime trauma from many fellow soldiers, Father Patrick Van Durme has extensive experience with the horror of war — enough to leave him struggling with symptoms of post-traumatic stress disorder (PTSD).

"I’ve got as much PTSD as anybody," remarked Father Van Durme, a Rochester diocesan priest who has served as an Army chaplain since 2008.

According to the National Institute of Mental Health (NIMH), PTSD is a strong physical and emotional response to a traumatic event or events — so profound that it impedes one’s ability to carry on a normal daily life. Overwhelming feelings of stress, fear and helplessness may last for weeks, months or years — even if the threat of danger has disappeared.

The NIMH adds that the underlying trauma typically arises from exposure to violence — such as physical or sexual harm, kidnapping, accidents, bombings and natural disasters — or the danger of such events. PTSD can develop from directly experiencing the trauma, witnessing it, or — as in Father Van Durme’s chaplaincy role — learning about it.

Although many people in society are at risk for PTSD, those serving in the military are most widely associated with the disorder. The U.S. Department of Veterans Affairs states that in 2011, nearly 500,000 veterans diagnosed with PTSD were treated in VA facilities.

Father Van Durme observed that the lifestyle of military personnel — lengthy tours of duty, frequent relocations — naturally lends itself to stress. Add service in combat zones, and the possibility of PTSD becomes even greater.

"You have to understand that war is horrible, and horrible things happen," remarked Father Van Durme, who most recently served in chaplaincy at Fort Hood, Texas. "These are guys who have had horrible, horrible experiences."

‘Wound to the soul’

The PTSD Alliance — a group of professional and advocacy organizations that provide education on the disorder — states that approximately 70 percent of adults in the United States have experienced at least one traumatic event in their lives, and up to 20 percent of these people end up developing PTSD. Along with service members, people at risk for PTSD include civilian survivors of war; survivors of domestic violence, rape or sexual assault/abuse; victims of physical assault; survivors of accidents, fires and natural disasters; children who are neglected or sexually, physically or verbally abused; adults who were abused as kids; people who have endured life-threatening illness or invasive medical procedures; emergency professionals such as ambulance workers, police, firefighters and rescue workers; and those who experience the unexpected death of a loved one.

The NIMH notes that PTSD symptoms fall into three categories:

Having a combination of at least one re-experiencing symptom, three avoidance symptoms and two hyperarousal symptoms for a month or more warrants a diagnosis of PTSD, according to the NIMH.

Risk factors for, ways to cope with PTSD

War veterans struggle mightily with PTSD not only because of the risk to their own lives, Father Van Durme pointed out, but also from the tremendous guilt they carry about trauma they’ve inflicted on others.

"Every soldier that I’ve met from the special forces are good and holy people who have to do their job," he explained. "Killing another person is so aberrant to their moral structure that it’s a wound to their soul."

"What they want to know is, ‘Does God still love me? Am I still a child of God after doing what I’ve done? Am I still a human being? How can God love me when I shot a person in the face, when I blew up a building and five children were in it?’" added Father Van Durme, who is retiring from the Army Nov. 23 due to complications from a back injury he suffered during a helicopter landing in 2010. It has not yet been established where he will be assigned upon his return to the Diocese of Rochester.

Father Van Durme said it’s important for a sufferer to talk about PTSD with a trusted individual, but noted that victims are often reluctant to admit their disorder and oftentimes don’t realize for years how deeply they’ve been affected by trauma. As a chaplain bound to strict confidentiality, he has often been the first person to hear of the horror soldiers have experienced in such locales as Iraq and Afghanistan.

"You just let them go and they do not stop talking for three hours," he said. "They say, ‘If I don’t tell you, I’ll never tell anybody.’ It’s a sacred trust of unbelievable proportions."

These stories of death and suffering have weighed heavily on him as well, Father Van Durme noted.

"For a long time I had nightmares," he acknowledged.

His stress has been exacerbated by spending a year beginning in 2009 in Iraq, where he routinely heard gunfire, and by the daily responsibilities of military chaplaincy, which he called a chronically understaffed service.

The good news is that Father Van Durme feels he’s managing his PTSD well through professional therapy, prayer and "just talking to people" to release his own pent-up feelings.

"The healing from PTSD is very possible, but you have to find a place to unload," he said. "If you try and hold that pressure in, the pressure cooker becomes a bomb and you hurt yourself and everyone around you. Fighting it is the thing that makes it worse."

On the other hand, he said combat soldiers who have been "living in hell for a year" might need more time to successfully manage their PTSD. He said he often refers people with PTSD for professional counseling if the disorder is profoundly affecting their marriages, work, or ability to eat and sleep.

Another key step for Father Van Durme has been "accepting who I am and that this is part of who I am, but it doesn’t define who I am." He said others with PTSD hopefully can realize that "it’s not the end of the story, not ‘the way I feel now is the way I’ll feel the rest of my life.’" Rather than dwell on the trauma constantly, "you can pick the book up and you can put it on a shelf.

"You’ll never, ever forget what you’ve done (or) what you’ve seen. But you can release the pressure and the pain that’s attached to that," Father Van Durme said.