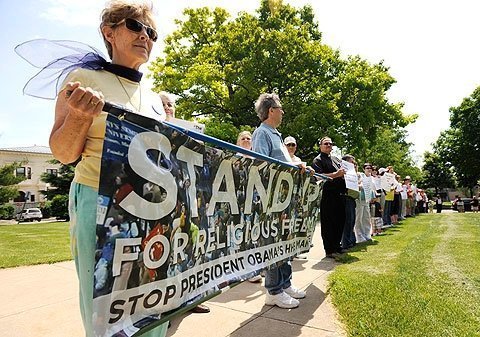 People protest the U.S. Department of Health and Human Services sterilization and contraceptives mandate during a silent procession outside the Ontario County Courthouse in Canandaigua June 8.

Ensuring the protection of people’s religious rights and consciences and ensuring the promotion of peace amid new technologies for war are the top two education issues on the diocesan Public Policy Committee’s 2012-13 agenda.

According to committee member Marvin Mich, parishes will focus in the weeks before the November election on issues of conscience protection, especially in regard to the U.S. Department of Health and Human Services (HHS) mandate that nearly all employers offer health-care plans that include coverage for sterilization and contraceptives, some of which could cause abortions.

Mich, who is director of social policy and research for Catholic Family Center, noted that state law already requires employers who provide prescription-drug coverage in employee plans to include coverage of artificial contraception. The law exempts religious employers, but the exemption excludes such entities as Catholic Charities, Catholic health institutions and some schools because they employ and serve non-Catholics. A group of religious organizations unsuccessfully fought against this mandate in court, and now they follow it under annual protest, Mich said.

The public-policy committee noted that numerous federal and state mandates have conflicted with church teachings.

"We advocate respect for the right of all faith communities to respond to their moral teachings without coercion," the committee’s agenda states. "Living the Gospel true to our values is central to our Christian mission in the world."

The issue of new warfare technologies will be presented during the spring of 2013 to coincide with the 30th anniversary of the U.S. bishops’ 1983 pastoral letter, "The Challenge of Peace," and the 50th anniversary of Pope John XXIII’s 1963 encyclical Pacem in Terris, Mich said.

The decision to focus on the issue of promoting peace in an age of new weapons of war was prompted by revelations of the use of weaponized drones to target suspected terrorists and the use of computer viruses for defense purposes, he said, adding that the U.S. Conference of Catholic Bishops has not yet had extensive conversations as to whether these new weapons are morally permissible.

After federal and state elections take place on Nov. 6, the committee will choose a third issue for parish-based advocacy and petitions.

"We are trying to be more nimble, so that we don’t pick an issue in May (when the public-policy agenda is drafted) that is irrelevant in February (when parish-based advocacy takes place and petitions are signed)," Mich said.

He noted, for example, that election results could change the composition of elected bodies, such as the state Senate, which might change the advocacy issues the committee chooses for its focus.

Mich said the committee will choose to either advocate for legislation that helps lift children out of poverty, or for legislation that ends the exclusion of farms from state employment laws on overtime pay, a guaranteed day of rest and collective bargaining rights for farmworkers.

"Our advocacy on this issue will include working with the owners of small farms, many of whom employ farmworkers, to support the production and growth of local agriculture while addressing this critical need of workers," the agenda states.

Mich noted that the New York State Catholic Conference has in the past tried to help negotiate solutions to this conflict by facilitating conversations between farmworker advocates and farm organizations.

Catholic organizations also have an ongoing concern about impoverished children, to whom they provide many services, Mich said. This year, some parishes may choose to participate in the annual interfaith event Children’s Sabbath Oct. 19-21, a national observance that includes special worship services, education programs and advocacy activities on behalf of children in poverty. The national observance is supported by Catholic Charities USA.

"Children in poverty is something Catholic Charities (agencies) across the diocese keep working on year in and year out," Mich said.

In a letter printed on the front of the 2012-13 diocesan public policy agenda, Bishop Matthew H. Clark noted that all the issues covered in the agenda are connected in that they ask diocesan Catholics to move beyond self-interest and speak out for those who cannot advocate for themselves.

"For whether we are considering the well-being of children, born and unborn, farmworkers or those who are affected by new drone missile technology, we are bound by Jesus’ call to love and care for one another," Bishop Clark wrote.