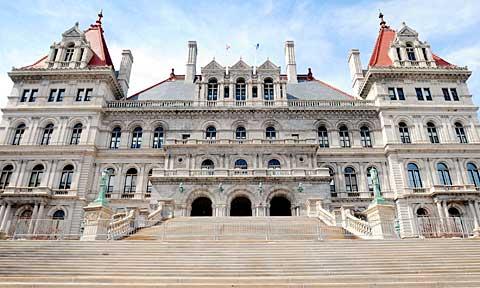 This 2008 photo depicts the New York state Capitol in Albany.

Several dozen representatives from the Rochester Diocese will travel to Albany Tuesday, March 9, to join advocates from other parts of the state for Public Policy Day.

Events will take place at the Empire State Plaza Convention Center. Appointments also are scheduled at the Legislative Office Building and state capitol, as participants meet with their legislators to discuss and debate a variety of issues. This annual gathering is sponsored by the New York State Catholic Conference, which represents the bishops of New York state in public-policy matters.

The top six public-policy priorities for this year, as defined by the state’s bishops, are to:

Many of these issues are related to current and past concerns of the Diocese of Rochester’s Public Policy Committee. Although the diocesan advocacy issue for 2009-10 — federal comprehensive immigration reform — is not among the state bishops’ listed priorities for Public Policy Day, Marvin Mich noted that diocesan representatives will advocate for migrant farmworkers March 9 by supporting the Farm Workers Fair Labor Practices Act in New York state.

"(Immigrant rights) was not one of the six ‘major’ issues chosen, but we will talk about it, especially with our New York state senators," said Mich, a Public Policy Committee member who serves as Catholic Family Center’s director of social policy and research.

Mich also noted that the Public Policy Committee is focusing on federal legislation in this area. During March, committee members will visit offices of Congress members to deliver postcards signed in diocesan parishes during Public Policy Weekend this past Feb. 13-14. The postcards ask for national reform of immigration policy.

Other activities on March 9 in Albany will be three workshops: "Catholic Social Teaching and the Issues of the Day" led by New York Archbishop Timothy Dolan; "Catholic Charities USA Update on the Campaign to Reduce Poverty" led by Father Larry Snyder, president of Catholic Charities USA; and "Continuing the Conversation," which will offer ways on how to extend advocacy efforts after Public Policy Day. There also will be a Mass at 11:45 a.m. in the convention center with Archbishop Dolan, Edward Cardinal Egan and the bishops of New York state.

EDITOR’S NOTE: To learn more about the public-policy issues and how to get involved in advocacy efforts, visit the New York State Catholic Conference’s Web site at www.nyscatholic.org or the Diocese of Rochester’s Web site at www.dor.org/charities/dioprograms/publicpolicy.htm.