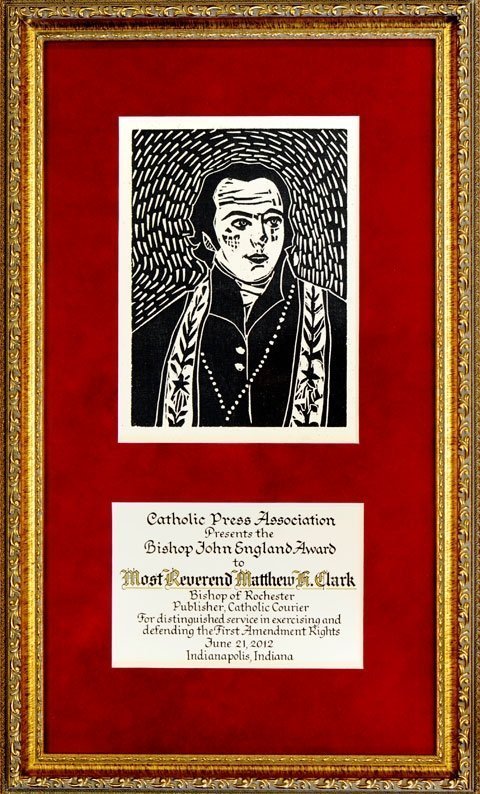 The truth can hurt at times. Yet that fact hasn’t kept Bishop Matthew H. Clark from ensuring that sensitive issues are objectively reported in the Catholic Courier and El Mensajero Cat√≥lico.

“A pretty crucial piece of the work of the church is to get the news out, the good news — which is not to say you only tell pleasant stories,” Bishop Clark remarked during a recent interview. “You communicate the reality, speaking of the environment that the church lives its life.”

Bishop Clark’s efforts in his role as publisher were recognized June 22, when he was announced as recipient of the 2012 Bishop John England Award during the Catholic Press Association’s annual convention in Indianapolis. This honor — decided by a committee of past CPA presidents — is given to publishers who have exercised and defended First Amendment rights and prerogatives, freedom of the press and/or freedom of religion.

“I have often told my colleagues around the country that I have the best job in the Catholic press. And nominating Bishop Clark for the John England Award gave me a chance to prove it to them,” said Karen M. Franz, general manager and editor of the Courier and El Mensajero.

In her written nomination, Franz noted that the Courier had been in crisis in the early 1980s due to contract difficulties, a major staffing turnover, plummeting revenues and mounting debt. Rather than fold the paper, in 1985 Bishop Clark supported the arrangement of emergency funding and persuaded the late-Auxiliary Bishop Dennis W. Hickey to spearhead the newspaper’s restructuring in early 1985.

Franz noted a pivotal point just a few months later when the Courier’s newly minted staff of young journalists — including her as editor — reported its first sex-abuse story. Their thorough, front-page reporting set off a firestorm of criticism; Franz recalled that seemingly all leaders of the local church were incensed about the newspaper’s “lack of charity” to the accused, a religious brother. Yet she said Bishop Clark backed her through that tense period — even inquiring about how she was holding up amid the criticism. — and has continually given the staff freedom to operate according to the dictates of journalistic ethics.

Franz added that Bishop Clark has ensured comprehensive coverage of important issues by ensuring that she was involved early in communications strategy regarding the implementation of the new Roman Missal, the Catholic response to efforts to suspend New York state’s statute of limitations, and other initiatives. She further noted that Bishop Clark has exercised his First Amendment rights as publisher through his regular “Along the Way” columns, which have spoken out on such issues as lay leadership; the importance of interfaith dialogue; progress related to the sexual-abuse crisis; the duty of Christians to respect the dignity of gay people; defending the Catholic position on marriage; and urging a return to the practice of weekly Mass attendance.

Bishop Clark also has backed major revisions and improvements to the Courier over the years. For instance, in 2000 he charged a strategic-planning committee to develop a plan to achieve his goal of putting the Courier “on the kitchen table of every Catholic family in the diocese.” The plan was implemented in 2004, and the paper continues to reach all diocesan households.

One year later, he asked the paper to establish a regular outreach to the diocese’s growing Latino population, and the Courier launched the Spanish-language newspaper El Mensajero Cat√≥lico.