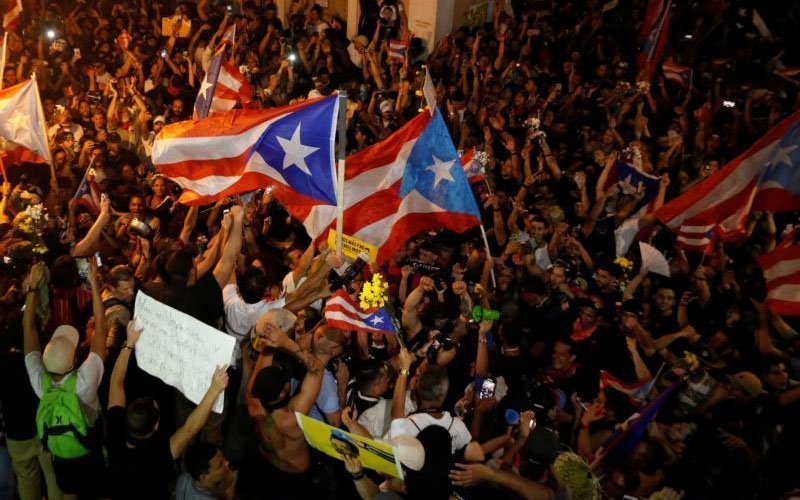 Demonstrators celebrate in the streets of San Juan after Puerto Rican Gov. Ricardo Rossello announced his resignation late July 24, 2019. Rossello resigned amid a torrent of protests over vulgar, mean-spirited texting conversations recently made public across the island. (CNS photo by Marco Bello, Reuters)

VATICAN CITY (CNS) — After nearly two weeks of massive protests in the fallout of scandals involving corruption and offensive private messages, Gov. Ricardo Rossello of Puerto Rico resigned from office, becoming the first governor to do so in the island’s history.

In a Facebook Live video message broadcast late July 24, Rossello spent nearly 10 minutes touting his accomplishments before acknowledging that remaining as governor “would endanger the successes we have achieved.”

“I announce that I will be resigning as governor, effective Friday, Aug. 2, 2019,” Rossello said, causing hundreds of thousands of Puerto Ricans lining the streets outside his residence to erupt in cheers.

Wanda Vasquez, the Puerto Rican Secretary of Justice, is expected to serve the remainder of Rossello’s term until elections in November 2020. However, distrust in members of Rossello’s administration have led to doubts as to whether she would take the reins. Additionally, in a statement released after Rossello’s announcement, Vasquez said she would assume the office “if necessary.”

The day before Rossello announced his resignation, the president of the Puerto Rican bishops’ conference said the actions of the governor and his administration were the final straw for residents of the U.S. commonwealth who have suffered through years of financial mismanagement, corruption and the devastating aftermath of Hurricane Maria.

In a telephone interview with Catholic News Service July 23, Bishop Ruben Gonzalez Medina of Ponce said the massive protests in the island’s capital, San Juan, were “a manifestation of the people and their outrage, as well as their exhaustion from having been ‘cogido de bobos’ (‘taken for idiots’).”

The July 10 arrest of two former senior officials of Rossello’s administration who were charged by the FBI with corruption, as well as the release of offensive text messages between the governor and his staff, have left Puerto Ricans questioning “what kind of a person do we have leading our people.”

“This was all a time bomb and it exploded,” he said.

Rossello faced an onslaught of criticism after the Center for Investigative Journalism published nearly 900 pages of private chats July 11 between the governor and his staff in which they make light of the victims of the 2017 hurricane as well as make several violent, homophobic and misogynistic remarks aimed at political and public figures.

Although Rossello said he would not seek reelection and no longer lead his party, his refusal to resign sparked further outrage, causing hundreds of thousands of Puerto Ricans to march in protest July 22 to “La Fortaleza,” the governor’s mansion.

Despite the indignation and anger felt by his compatriots, Bishop Gonzalez told CNS that he was impressed by the unity and respect felt at an event “that was not organized by a specific group but rather a reality that began among the people.”

The bishop attended the protest, along with Bishop Eusebio Ramos Morales of Caguas, secretary of the bishops’ conference. Archbishop Roberto Gonzalez Nieves of San Juan, he said, was “unable to attend because he is still recovering from surgery.”

“The words that I heard the most were, ‘Thank you for being with us; thank you for being present,'” Bishop Gonzalez recalled. “We are not the protagonists of these protests, we are not going there with a flag that says, ‘Here is the bishop. We are Catholics.'”

Instead, he said, the presence of the bishops at the protest was meant to accompany Puerto Ricans who are rediscovering values that “the church has proclaimed and that has been sown into the hearts of men and women.”

The unity shared among all men and women on the Caribbean island, he added, is a commitment to “establishing a better Puerto Rico.”

The bishops of Puerto Rico not only want to accompany people by participating in the protests, but also through prayer, Bishop Gonzalez added.

Catholics across the island will gather July 26 for a day long prayer service titled, “24 hours with Jesus praying for peace in Puerto Rico.” The event, which he said was inspired by Pope Francis’ “24 hours with the Lord” Lenten initiative, will take place at the National Shrine of Our Lady of Divine Providence in San Juan.

Additionally, every diocese will hold similar events in local parishes for those unable to travel to the national shrine, the bishop said.

Nevertheless, Bishop Gonzalez told CNS that true change can only come if Rossello listens and accepts the growing demand for his resignation by those he was elected to serve.

Rossello, he added, had lost “the trust of the people.” The bishop questioned whether the governor was fit “to lead a dialogue if nobody wants to listen to him, not even members of his own party.”

The bishop, like most people, felt Rossello’s resignation was necessary.

“Forgiveness is one thing, and no one is opposed to forgiving him,” he said. “But he must also realize that actions have consequences, and one of those consequences is that the people have lost trust in him. This is what the people are asking. How are they going to be governed by someone whom they can’t trust?”