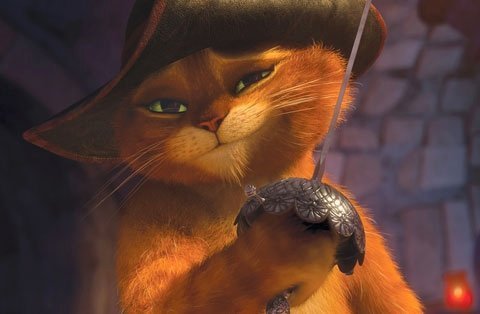 NEW YORK (CNS) — An exceptionally intelligent and energetic script that includes a moral lesson propels "Puss in Boots" (DreamWorks), a 3-D animated children’s feature that provides the back story of the fairy tale character as portrayed in the "Shrek" films.

Without being condescending and without adding snarky in-jokes likely to fly over the little ones’ heads, director Chris Miller and screenwriter Tom Wheeler combine imagery from fairy tales with a plot that makes Puss (voice of Antonio Banderas) a mischievous bandit.

As such, this version of Puss is a faint echo of Zorro, the fictional Mexican hero — originated by writer Johnston McCulley — who defends the poor and downtrodden.

Based on a story by Wheeler, Brian Lynch and Will Davies, this adventure tale has Puss, his romantic interest Kitty Softpaws (voice of Salma Hayek) and Humpty Dumpty (voice of Zach Galifianakis), Puss’ childhood friend from their time together in an orphanage, on the hunt for the magic beans of Jack and the Beanstalk.

Only said beans aren’t in the possession of that Jack, but rather are greedily hoarded by a swarthy bumpkin couple, Mr. and Mrs. Jack and Jill (voices of Billy Bob Thornton and Amy Sedaris).

Jack and Jill, who keep pigs, haven’t planted the beans yet, and usually argue over the idea of having a child. "I could raise it like it was a squirrel," Jack explains.

Grabbing the golden eggs at the top of the beanstalk has been Humpty’s quest since childhood; he views success in this pursuit as compensation for never fitting in anywhere. As he hatches his plot, he pledges the young Puss to secrecy, explaining, "The first rule of Bean Club is — you never talk about Bean Club!"

Humpty also is embittered from his time in jail after one of his earlier capers with Puss went wrong, and the cat managed to escape.

Puss has to balance loyalty to his friend with the knowledge of what’s right, especially after they find the golden eggs and have to deal, in consequence, with one very angry goose. So there’s a valuable theme here about the perils of greed and dishonesty.

Parents of young children should know in advance, however, that one of the principal characters dies.

Although sweetly presented, this demise harkens back to an era of cinema when characters who committed the worst sins were compelled to meet untimely — and therefore atoning — ends. In that sense, while potentially upsetting to tots, such a turn of events gives this latest, thoroughly fresh, spin on French author Charles Perrault’s centuries-old Puss character yet another classic dimension.