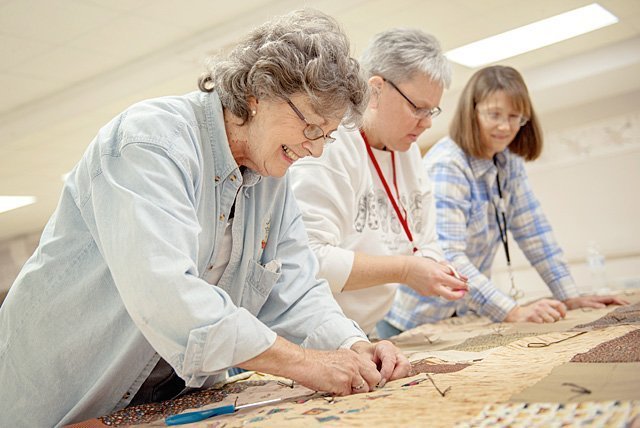 Volunteers Connie Manikas (from left), Joanne Silver and Lisa McNinch make a quilt during a Nov. 17 meeting of the My Brother’s Keeper Quilt group at Penn Yan’s St. Michael Church.

Hundreds of Yates County residents will be a little warmer this holiday season, thanks to the efforts of My Brother’s Keeper Quilt Group.

The approximately two dozen women who make up this group meet biweekly in the basement of Penn Yan’s St. Michael Church, which is part of Our Lady of the Lakes Catholic Community. The quilts they complete during their meetings will be distributed to families and individuals Dec. 10 and 11 during Yates County’s annual Christmas For the Needy event.

"It’s just a wonderful feeling to know that you’re making their Christmas a little warmer," said Joanne Drewno, coordinator of the quilt group and an Our Lady of the Lakes parishioner.

St. Michael has been hosting the quilters ever since the group was founded more than 20 years ago, but My Brother’s Keeper always has been open to people of all faiths, Drewno said, noting that the original group had a different moniker.

"When they first started they called themselves Ugly Quilts because they would use pieces of whatever anybody gave them," Drewno said.

At first, the women made quilts and fashioned them into sleeping bags for homeless people who sometimes knocked on the door of St. Michael’s rectory, recalled Joanne Quinn, one of the group’s founding members and an Our Lady of the Lakes parishioner. Since Penn Yan’s homeless population was not very large, however, the group soon turned its attention to people who had homes but were struggling to make ends meet, or people who’d lost their homes in fires, said Quinn, who ran into one such quilt recipient years later. The group had given two quilts to this woman’s family after a fire had destroyed the family’s home and all their possessions, and the woman said the group’s generosity in the fire’s aftermath saved her life and gave her hope.

"She said it was all they owned, were those two quilts," Quinn said. "It made me feel great."

The group eventually changed its name to My Brother’s Keeper, a name that more accurately reflected the group’s mission as well as its products, Drewno said.

"Our quilts are just beautiful now, and there’s not an ugly quilt in the bunch. They’re all beautiful different colors," she said.

Each quilt is made up of three layers, she explained. The bottom layer is usually a sheet and the middle layer is a blanket. People frequently donate electric blankets that are no longer functional, and once the wires are removed, these blankets made great fillers, Drewno said. The top layer is made from fabric squares that group members sew together at their homes. They bring their completed top layers to St. Michael’s basement every other Monday and choose bottom layers that coordinate well with their top layers, said Drewno, noting that some members aren’t able to come to the meetings but contribute by sewing beautiful quilt tops at their homes. Once all three layers have been matched up, the quilters use crochet thread to tie them together.

"Every eight inches or so you put your needle down through and tie a knot with the heavy thread so it secures those three layers together for warmth," Drewno said.

Using sewing machines stored in St. Michael’s basement, the quilters then sew the edges of each layer together to complete the quilt. The women in the group have completed more than 250 quilts this year using blankets and thread donated by the community, discovered at yard sales or purchased by members, Drewno said.

"We all love doing it. It’s a lot of work, but it’s great. What we’re doing is spreading our love of quilting and putting it to good use in our community," she said.

"It makes you feel very good to be able to do things for people that just don’t have anything, and you have such a good time doing it," Quinn agreed.