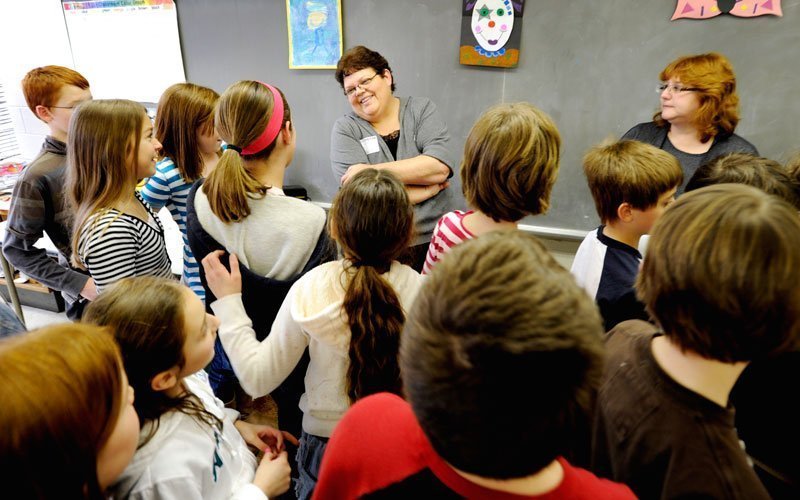 CANANDAIGUA — Students and teachers at St. Mary School recently received a visit from a person many of them had known for years but had never met in person. On April 8 they welcomed Terry Clifford, a cohost on Rochester-based country radio station 92.5 WBEE’s morning show, the BEE Morning Coffee Club.

A number of students and teachers tune in to Clifford each morning in their homes and cars, listening to her bantering with her cohosts and interviewing country music’s stars. Most of them, however, had never met the woman behind the voice they’re so familiar with.

Not everyone thought Clifford’s voice sounded familiar, though. One young student raised his hand and told Clifford her voice sounded different in person than it did over the airwaves.

“I probably shouldn’t ask, but does my voice sound better on the radio or in person?” Clifford asked as she stood at the front of an art classroom.

“In person,” was the unanimous, chorused answer from the students sitting cross-legged on the floor before her.

Regardless of what people think about the way her voice sounds in person, Clifford said such personal interactions with listeners and nonlisteners alike are some of the things she likes most about her job.

“I love getting myself into schools. I love being able to talk to kids,” she told the Catholic Courier.

Clifford often travels to schools within WBEE’s listening area to read to students from her favorite Chicken Soup for the Soul books and answer children’s questions about radio and country music. She started doing this years ago, when WBEE was just getting started and didn’t have any money to advertise and promote the station. She and her cohost, the late Bill Coffey, decided to take matters into their own hands by making as many public appearances as possible.

“One of the programs that I developed myself was to get myself into as many schools as possible,” Clifford said.

Even students who haven’t heard Clifford on the radio probably will go home and tell their parents about her visit, Clifford said. Those parents might decide to tune in to WBEE, but recruiting more listeners is not her only reason for these visits.

“It’s a win-win for me because if it brings people to the station even for one day, it’s good,” she said. “But I really enjoy it. It’s nice to just get out of my little cocoon and just meet with the people that have supported me all these years.”

Clifford also tries to give the students a positive role model of someone who loves her job, she said. She isn’t afraid to show how much she loves her job, and encourages the kids to remember that years down the road when they’re faced with their own career choices.

“I just want them to know that what they do for the rest of their life shouldn’t be based on how much money they make, but how much they enjoy it. Be happy in what you do,” Clifford said.

She didn’t catch the radio bug until she was a senior in college, Clifford said, but after one three-hour on-air shift she knew she was hooked. When they’re in college, she told the students, they should make themselves known on their campuses and get to know their teachers.

“Their advice is absolutely golden,” she said.

Clifford brought a well-loved copy of Chicken Soup for the Pet Lover’s Soul with her to St. Mary and read a few of her favorite stories to the children. One was about an elderly couple who get two new puppies to fill the paw prints of their beloved schnauzer, Pepper, when he passes away. Another, titled “The Cat and the Cat Burglar,” was about a single woman in New York City who adopted a kitten and named her Seal. Later, Seal alerted the woman to the presence of a burglar in the kitchen, and with Seal’s help the woman was able to scare off the intruder.

This story was the highlight of Clifford’s visit for third-grader Brendan McAuley, who thought her entire presentation was “great.”

Clifford took questions after reading to each group of students. Many of the younger students simply wanted to tell Clifford about their own pets at home, but a few had questions about the broadcast business and what Clifford does at work. She explained to students that all of the music and commercials they hear come from a computer in the studio.

“There are no CDs or anything like that. It’s just all music out of a computer,” she said.

The older students seemed especially impressed by all the stars Clifford had met, including Taylor Swift, Miley Cyrus, Tim McGraw and Carrie Underwood, who had just spoken with Clifford on the air earlier that morning.

“I recognized some of the people she was talking about,” said eighth-grader Allie Johnstone. “I thought (her talk) was really good.”

“I thought it was really fun and cool,” agreed seventh-grader Katherine Erdle.