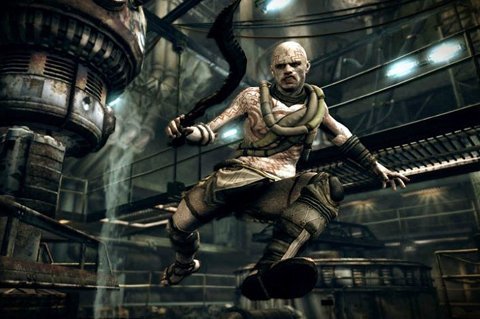 NEW YORK (CNS) — Every first-person action game of the past 20 years owes a debt to Id Software. Genre-defining titles like "Wolfenstein 3D" and "Doom" set the pattern for all the run-and-gun offerings that followed, while Id-built graphic engines have powered hundreds of other games.

Most of the latter, however, designed by other developers, were superior to anything made by Id, which hasn’t created a compelling or original title since "Doom II" in 1994. For years, Id’s designers have been content to recycle the same fundamental ingredients with gradually diminishing results. "Doom III," its last major effort at an upgrade, was riddled with cliches, trite gameplay elements, repetitive funhouse tricks, and a depressing sense of deja vu.

Id is trying something new with its latest design, but they still seem utterly incapable of breaking free of its rudimentary first-person-shooter origins. The result is a pointlessly violent experience that’s never more than merely adequate technically.

"Rage" (Bethesda Softworks/Id) is a post-apocalyptic driving-shooting game. At its heart is a standard Id-style shooter which the designers have attempted to embellish with role-playing and open-world elements. With remarkable designs like "Fallout 3" and "Borderlands" already plowing the same field, Id had to come up with something fresh to stand out from the pack.

"Rage" mixes driving sequences with gunplay without making either particularly interesting. The driving mechanics are fine, with races, combat, and the ability to upgrade and enhance your vehicle. There’s nothing really wrong with it all; there’s just nothing very special about it, either.

The first-person shooter portion of the game is one flat action sequence after another. You get a mission (either a central plot mission or a freelance job for money or gear), drive to the specified location, run around shooting mutants in the face until everyone is dead, perform some mundane task, and then return for your debriefing and prize.

Id attempts to mix things up a bit, not by creating a real role-playing game element with stats and upgrades, but by allowing you to use different kinds of ammunition to enhance the abilities of a basic set of weapons. There are some interesting effects here, but none of it really adds much to the depth of the gameplay. The only real trick comes from matching the most effective ammo to the foe at hand — and then buying plenty of it.

The game just feels grim, pointless and devoid of life, with no real purpose. This is even harder to choke down since the ghost of a plot is reminiscent of "Fallout 3" which, however, handled it much better.

"Rage" does have two things that elevate its quality level a little: the so-called wingstick, a bladed boomerang-style weapon that almost feels like something new, and the enemy programming, which is a cut above what we’ve seen lately. Beyond that, there just isn’t much to get excited about.

Morally, the game is running on empty. The pervasively grim atmosphere is only rarely ameliorated by some signs of hope, such as people banding together to form communities and help each other. By and large, though, the world is a hostile, bloody, brutal, amoral and ultimately nihilistic hell on earth.

The population is divided into various factions made up of mutants, occultists, lunatics, con men, and thugs. All of them seem devoted to domination and chaos — with only the bland forces of either the Resistance or the Authority (even their names are generic!) representing some greater purpose.

Prior to the events of the game, the player’s character had been chosen by the Authority to participate in the "Eden Project." This attempt to seal the best and brightest of the earth’s population in a cryogenic shelter called "The Ark" malfunctions, and the player awakes 106 years later to find the world devastated. Such corny use of biblical nomenclature is about as deep as religious elements get here.

Various pagan and occult elements are pervasive, but about as complex in their elaboration as a heavy metal album cover. More problematic is the entire tone of the game, which features an unpleasant vision of the future and a consistently dehumanizing gauntlet of bloody mayhem.

The game contains pervasive graphic violence with gore, including decapitations and dismemberment, occult themes and extensive use of foul language. The Catholic News Service classification is O — morally offensive. The Entertainment Software Ratings Board rating is M — Mature.