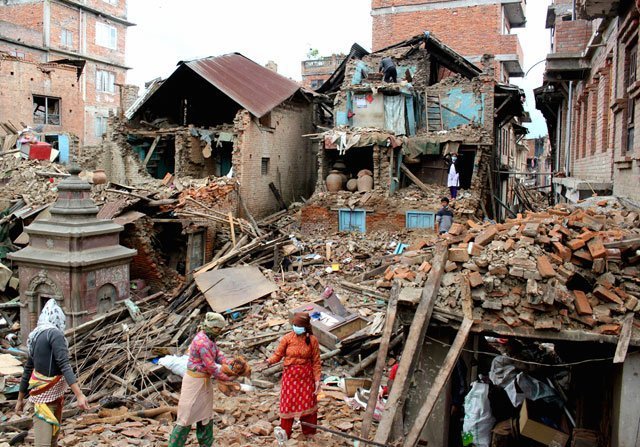 Earthquake survivors of Harsiddhi village on the outskirts of Kathmandu, Nepal, retrieve belongings from their destroyed homes April 29, five days after a major earthquake struck the region

KATHMANDU, Nepal (CNS) — Five days after a powerful earthquake sowed death and devastation in Nepal, victims could be seen trying to salvage possessions from mountains of rubble in the suburbs of Kathmandu.

"Let such a calamity never happen to anyone anywhere," Amrit Maharjan, standing on the rubble of his three-story house, told Catholic News Service April 29.

Soya, Maharjan’s 11-year-old daughter, was among 18 people who died in the congested village following the magnitude-7.8 earthquake that hit Nepal April 25.

"I and my wife were out in the field when the quake occurred, so, we were safe. My mother, who was with our youngest daughter in the house at the time, is in hospital," Maharjan said.

While the official death toll surpassed 5,000, Nepalese Prime Minister Sushil Koirala said April 28 that it could surpass 10,000 as reports of casualties from hundreds of remote villages were yet to be tallied.

But even in the suburbs of Kathmandu, Maharjan, a retired government employee, said: "Nobody has reached here for relief work so far. There is no point in waiting. We have to try to save whatever we can from this wreckage."

As he spoke, three dozen people were busy salvaging whatever belongings they could retrieve from the remnants of the decades-old brick-and-mortar houses.

The similar scenes of even elderly quake victims retrieving their valuables, standing on top of layers of rubble, confirmed the widespread criticism that the relief and rescue work was confined to a few pockets of Kathmandu.

Five days after the quake flattened buildings in Bagdol village, no relief teams had arrived.

"We don’t know — where is the government? If we do not act, all our possessions will be damaged," said Dev Maharjan, standing near a makeshift bamboo stand over which his possessions were being taken down from the collapsed third floor, with the help of his friends.

Unlike many quake victims, Sanu Lama was cheerful, holding her 17-month-old daughter Masun in front of her collapsed three-story house.

"I was on the middle floor when the quake happened and everything crumbled. I crawled out when it was over. I had not even a scratch on my body. I never thought I would be alive," Lama told CNS.

However, she, too, complained that no relief team had reached the village to help salvage their possessions from the rubble amid intermittent rain. Her family was saying in a tent.

As Lama spoke, half a dozen Caritas Nepal staffers were using an axe to break open the door to the rented room of Bishu Tamang, a Caritas Nepal driver, in the four-story concrete flat that had developed wide cracks.

With Tamang busy driving church charity workers around, he could not find time to go to the rented house to retrieve valuable things from the apartment.

At Assumption Cathedral, Deacon Lalit Tudu said preparations had been completed for his ordination May 1. It has been postponed.

"Maybe God has different plans and wants me to wait longer," said the deacon, who was busy organizing storage of relief material being brought to the cathedral compound under the direction of Caritas Nepal, which was coordinating the Catholic relief work.

After a series of meetings with officials of more than a dozen international Catholic charities — including Caritas Internationalis and Catholic Relief Services — assessment teams were dispatched to several remote areas April 29. Church charities were awaiting final approval from the government’s Social Welfare Council to launch systematic relief work in four districts.