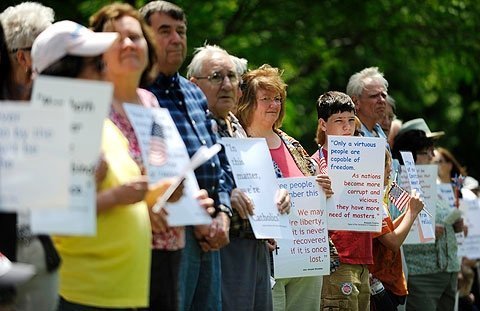 Participants in a silent procession in Canandaigua pause outside the Ontario County Courthouse June 8. The procession, which started at St. Mary's Church, was part of the national "Stand Up for Religious Freedom" effort.

ROCHESTER — Jim Garrity of Irondequoit held a large flag that billowed in the wind June 8 as he waited for the start of a rally on religious freedom.

He said he believes recent efforts by the U.S. government to provide standards for health insurance instead would trample on the rights of religious organizations.

The U.S. Department of Health and Human Services issued guidelines this year as part of the 2010 Affordable Care Act that mandated employers to pay for employee’s artificial contraception, sterilizations and some medicines that may act as abortifacients as part of employee health-care plans. The guidelines include an exemption for religious employers, but that exemption is so narrowly drawn as to exclude religious schools, hospitals and charities that employ and serve non-Catholics.

"We have always believed that the mandate comes from our Lord to feed the hungry and serve the sick and educate the young, and somehow that is no longer defined by our government as Catholic," said Garrity, who attends the parishes of Holy Cross in Charlotte, Our Lady of Victory and St. Stanislaus in Rochester, and St. Mary in Honeoye.

The rally, which took place on the lawn of the Federal Building, featured speakers from a variety of organizations, including Father Mickey McGrath, assisting priest at St. Frances Xavier Cabrini Parish, and Father Michael Mayer, assisting priest at St. Pius Tenth Parish in Chili. There also was a rally for religious freedom in Canandaigua that featured a silent march to the Ontario County Courthouse from St. Mary Church.

Some speakers encouraged participants at the Rochester rally to live their faith in the voting booth, while others suggested that they avoid politicizing the fight over religious freedom.

Father Mayer urged people to dialogue with those who did not share their beliefs, but he noted that attempts at dialogue are made more difficult by a lack of shared moral foundations and vocabulary. He also encouraged those at the rally to show the joy in being a believer of Jesus Christ.

"We are about saying to people you are glorious because you have been made in the image of God," Father Mayer said.

Father McGrath decried the increase of religious secularists, who he said are trying to prevent people of faith from living that faith in the world throughout the week.

"The First Amendment says nothing about the separation of church and state," he said. "It says nothing of freedom of worship, but of the free exercise of religion, which is much more expansive in its scope."

"When all men are their own moral authority, virtue dies and everyone simply does what is right in his own mind," Harden said.

Speaking before the rally, Kathy Moore of Chili, a St. Pius Tenth parishioner, said the Catholic Church as an institution should not be forced to go along with something in which it doesn’t believe.

"I think that (people) don’t get that the church is an institution separate from the individuals of the church, and the church has a right to set church dogma," Moore said.

The rally also featured participants from a variety of other faiths as well.

"I’m not Catholic, but I support the Catholic Church in this position," said Toni Thompson, a member of the First Congregational United Church of Christ in Fairport. "It’s a direct assault on the Constitution."

A counter protest took place at the same time as the Rochester rally, and some protesters used a bullhorn, sings and chanting to try to drown out the speakers at the religious freedom rally.

Speaking as part of group that carried signs with the words "Religious dogma is bad for your health," the Rev. James Swarts, an adjunct U.S. history professor at SUNY Geneseo, who was formerly an Episcopal priest, contended that the religions of those who use and are employed by health care institutions, schools and organizations should be respected, not just those of their employers.

"Health care should be for everyone," Swarts said. "If a young lady has been raped, why should she be subjected to religious questioning when she needs health care?"

It also claimed that employees who work for religious institutions would be denied the ability to make reproductive choices. Catholic organizations that oppose the health insurance mandate have pointed out that even if religious employers were not required to pay for artificial contraception, sterilization and other services, nothing in the law would bar employees from obtaining them.