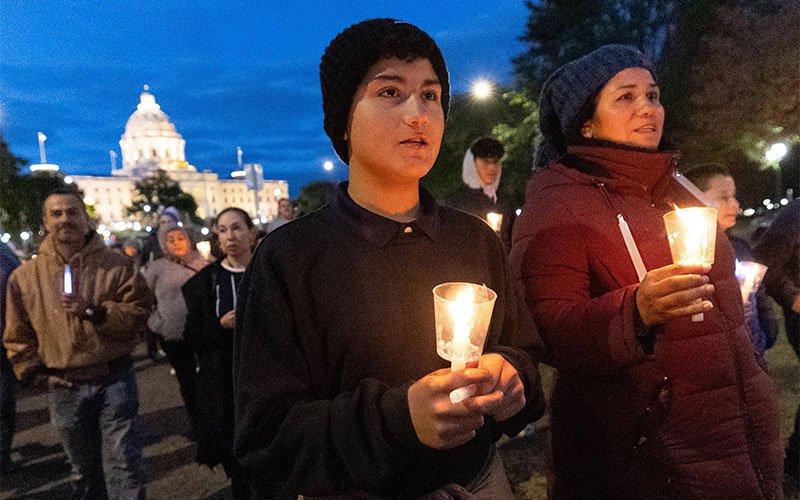 Brandon Alvarado, left, and his mother, Evangelina Alvarado, walk from the Minnesota State Capitol to the Cathedral of St. Paul in St. Paul, Minn., Oct. 7, 2022, during an annual candlelight rosary procession. Several hundred participated in the procession, including Auxiliary Bishop Joseph A. Williams of St. Paul and Minneapolis, who led a prayer service at the cathedral following the procession. (CNS photo by Dave Hrbacek/The Catholic Spirit)

WASHINGTON (CNS) — Praying the rosary for the conversion of sinners is “an act of compassion and love,” speaker David Carollo told the crowd gathered for the National Rosary Rally in Washington Oct. 9.

“Praying for conversion is the duty of every believer,” he said. “We must always testify to the truth no matter the cost. To do anything less will make us unworthy of our calling as Catholics, as Christians.”

“Never be afraid to tell the truth, to help admonish sinners not out of judgment but out of love,” he added.

Carollo is executive director of the New Jersey-based World Apostolate of Fatima USA, which was founded in 1946 as the Blue Army of Our Lady of Fatima.

He was one of several people who led prayers and spoke at the rally. Others included Auxiliary Bishop Joseph L. Coffey of the U.S. Archdiocese for the Military Services; Sister Deirdre Byrne, superior for her community, the Sisters of the Little Workers of the Sacred Heart in Washington; and Msgr. Charles Pope, pastor of Holy Comforter-St. Cyprian Catholic Church in Washington.

Rally participants gathered at St. Peter’s on Capitol Hill Catholic Church for exposition of the Blessed Sacrament followed by a eucharistic procession to the rally site at the eastern edge of the National Mall facing the U.S. Capitol. As they walked they prayed the joyful and sorrowful mysteries of the rosary.

At the rally site, Father Stephen Imbarrato, as the emcee, introduced the afternoon’s speakers after saying a prayer for the nation.

Father Imbarrato, a nationally known pro-life activist, is a retired priest of the Archdiocese of Santa Fe, New Mexico, who now lives in Florida.

Before his remarks, Carollo led the crowd in a prayer to St. Joseph “as father, protector and consoler.”

“As head of Holy Family bless the world and all its inhabitants,” he prayed. “Help us in restoring marriage and family to the right order of God. With your spiritual carpenter skills, rebuild our church, guide those who have strayed back to the eucharistic Lord (and) strengthen the church.”

“The power of this rosary coast to coast is really impossible to fully know,” Carollo told the crowd, referring to the wider part of the event involving people across the country.

Rosaries being prayed around the U.S.

In Washington and around the U.S., rosaries were being prayed for respect for life at all stages of development, especially the unborn; the sanctity of marriage and families “based upon God’s creation of man and woman”; upholding constitutionally protected religious freedom; “the return of our nation to God and holiness”; and other intentions.

At 4 p.m. East Coast time, with Bishop Coffey leading them, all participants prayed the glorious mysteries of the rosary simultaneously.

Carollo recalled the beginnings of Our Lady’s Blue Army, saying that “our founders got together and brought an army (of people) to its knees in front of the Blessed Mother to promote Our Lady of Fatima.”

They were charged with spreading her message that the faithful pray the rosary daily to bring peace to the world, pray for the conversion of Russia, do penance and have a devotion to her Immaculate Heart.

“(This) army has as its main weapon the rosary, contrary to all these crazy assertions that the rosary is part of the right-wing thug culture and part of a hateful attack on people who do not agree,” Carollo said, noting that such assertions were put forward by an East Coast secular publication recently.

“What a sad thing,” he commented.

He was referring to an Aug. 14 article in The Atlantic magazine by Daniel Panneton that ran under the headline: “How the Rosary Became an Extremist Symbol.” “The AR-15 is a sacred object among Christian nationalists. Now ‘radical-traditional’ Catholics are bringing a sacrament of their own to the movement,” the article began.

After an outcry by critics over the description of the rosary as “an extremist symbol,” the magazine’s editors changed the headline to: “How Extremist Gun Culture Is Trying to Co-Opt the Rosary.” “Why are sacramental beads suddenly showing up next to AR-15s online?” said the new lead-in to the article.

The National Rosary Rally was sponsored by the Holy League, a Catholic men’s movement, and concluded the organization’s 54-day “Novena for Our Nation.” It also came on the last day of the 30th International Week of Prayer & Fasting.