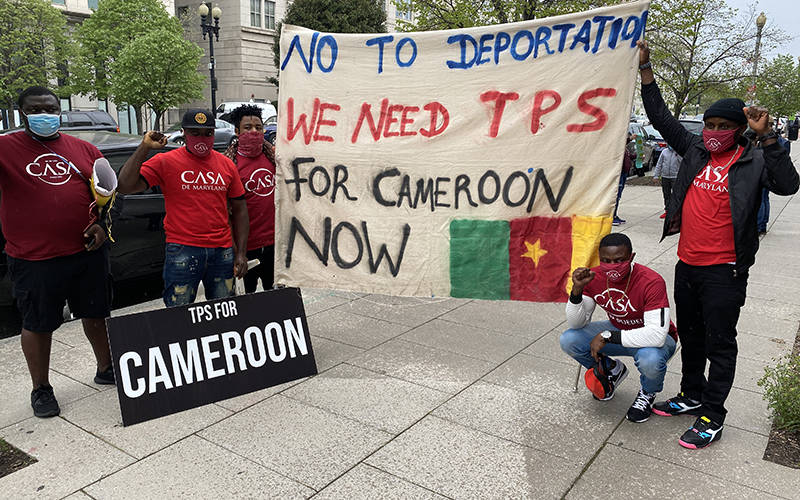 WASHINGTON (CNS) — An April 14 rally outside U.S. Customs and Immigration Services headquarters in Washington called for the United States to give Temporary Protected Status designation to nationals in several countries — and to extend the designation to those who had been previously granted it.

“We must protect TPS at any cost, for our families,” said Haddy Gassama of the UndocuBlack Network, who emceed the rally.

TPS, which was created 30 years ago, is given to eligible nationals of designated countries who are present in the United States, usually due to armed conflict or natural disasters in their home countries, and it allows them to live and work in the United States for limited times.

As of 2017, about 320,000 had the TPS designation, with the majority coming from El Salvador, at 195,000. Those at the rally also seek TPS to be granted to nationals from the Bahamas, Cameroon, Guatemala, Guinea, Mauritania and Sierra Leone.

“Why should TPS be extended for these refugees?” asked Yahiya, a young man from Syria — rally organizers asked Catholic News Service not to publish his full name due to security concerns. The most obvious reason, he said, is that if “they are turned away or sent back home, there will be untold suffering.”

Further, he added, the United States needs to accept responsibility for its involvement in the region.

“Syria is no longer a hot topic on the nightly news,” Yahiya said, and “this breeds the misconception that the country is stabilized or the war is not going on. Nothing could be farther from the truth.”

In Syria, “the infrastructure has deteriorated. The economy has outright collapsed,” he added. Moreover, “food is impossible to come by. Due to the lack of money, even the most basic necessities have been priced out for lower-income Syrians and most middle-income families.”

Even sending financial help is dangerous, according to Yahiya. “You can’t even wire cash to Syria because that would condemn you and your family if they knew you got money from outside,” he said.

Benjamin Zepeda, the 17-year-old son of parents who are both TPS holders, said his family’s life has “been in limbo for the past four years. These people deserve permanent residency now.”

Zepeda added some member of the TPS Alliance, one of the groups that sponsored the rally, started a hunger strike March 9 and will conclude it April 30 — the 100th day of President Joe Biden’s administration. “We expect them to fulfill their promises because our lives are not temporary,” he said.

Diego Godinez Solares, 16, said his mother and his younger brother left their native Guatemala for the United States more than four years ago. Godinez, who sorely missed his family, made the trip solo in 2019. “I spent a month in the detention center waiting to be reunited with my mom. It was very emotional and I was very happy,” he said.

He added, “I’m here to ask Congress and the president to approve TPS for Guatemala. … My family has been without any communication in Guatemala because of Hurricanes Eta and Iota, and my grandfather’s house — the volcano wiped out their land.”

With TPS, he said “we want to have the right to work. I want to be able to go to university and chase my dreams.”

The day after the rally, Jesuit Refugee Service and Georgetown University’s Institute for the Study of International Migration issued a report, “Seeking Protection in a Pandemic: COVID-19 and the Future of Asylum,” which concludes that restrictions put into place to protect public health during the pandemic have kept people from legally seeking protection.

Although TPS was not explicitly mentioned in the report’s recommendations, Giulia McPherson, U.S. director of advocacy and operations at JRS, told CNS in an April 15 email that TPS could be part of a larger strategy.

“Many forms of protection for the forcibly displaced have been victim to the COVID-19 pandemic, including access to asylum and refugee resettlement,” McPherson said.

“While the U.S., and more recently Colombia, have offered TPS for asylum-seekers within their borders, more needs to be done,” she added. “These short-term measures serve a critical purpose, but we need to prioritize investments in long-term, safe and legal pathways for those seeking protection.”