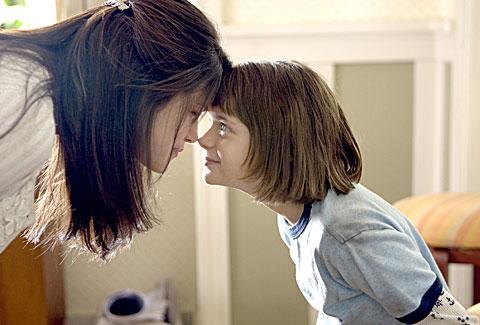 NEW YORK (CNS) — Though ostensibly set in a more-or-less contemporary suburb of Portland, Ore., the gentle, winning comedy "Ramona and Beezus" (Fox) occupies a nostalgia-tinted world so idyllic that you half expect one of the characters to announce, somewhere along the line, that a lovely family called the Cleavers just moved in next door.

Traditional values and close-knit family relationships reign in director Elizabeth Allen’s squeaky-clean adaptation of Beverly Cleary’s best-selling series of children’s books, the first of them published — viewers will hardly be surprised to learn — more than 50 years ago.

So when irrepressible 9-year-old Ramona Quimby (Joey King), on whom the slightly static story centers, warns her parents, Robert (John Corbett) and Dorothy (Bridget Moynahan), at the dinner table that she has to say a terrible swearword to vent her numerous frustrations with life, the term she eventually produces is so mild, it makes Wally and the Beaver’s oft-repeated "Gee whiz!" sound blue.

While good-hearted and imaginative, Ramona is also accident-prone and her minor misadventures, which leave her feeling misunderstood, tend to antagonize her straight-teeth-and-straight-A’s teen sister, Beezus (Selena Gomez). Indeed, much to her annoyance, senior sis has been burdened with that ungainly moniker as the result of Ramona’s childhood inability to pronounce her real name, Beatrice.

Besides their tiffs, the only source of worry or conflict on the girls’ native Klickitat Street — a real-life address that Cleary’s tales have made iconic — arises from Dad’s loss of his accounting job. (Add to that the aggravating factor that the family has just embarked on an expansion of their home, a project they might not have the funds to finish, and this aspect of Laurie Craig and Nick Pustay’s script begins to feel very much of the moment.)

Unemployment leads to mild marital tensions, and Dad finds himself spending a night on the couch. But, like the prospect of the bank "taking the house" — an expression Ramona overhears and interprets with a comic extreme of literalism — the specter of divorce seems quite distant along this boulevard of unbroken dreams.

Lightening the mood is the swiftly rekindling romance between Ramona’s favorite aunt — and Beezus’ namesake — Bea (Ginnifer Goodwin) and her high school true love Hobart (Josh Duhamel). Ever the ramblin’ man, Hobart is off to Alaska and floats the idea of Bea coming with him. But anyone who fears she might do so before exchanging marriage vows has clearly not been paying attention.

Beezus, too, has an affair of the heart under way, having fallen for childhood friend Henry Huggins (Hutch Dano, not Rex Harrison). In keeping with the delightfully innocent atmosphere of la rue Klickitat, it takes this bashful young pair the better part of 90 minutes to work their way up to a first kiss.

Though some fussy adults with short attention spans may object that nothing very momentous happens as "Ramona and Beezus" unspools, as should be obvious by now, what does take place transpires in the nicest possible way.