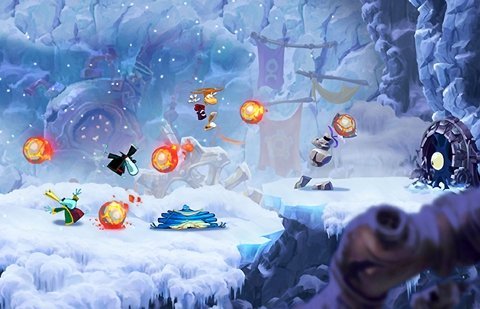 NEW YORK (CNS) — In a gaming world filled with so many gray, war-torn first-person shooters, it’s sadly tempting to consider the colorful platformers that predominated in the 1980s and ’90s as bright beacons long extinguished.

Yet, such titles do still exist, and "Rayman: Origins" (Ubisoft) is a welcome case in point.

The central character first appeared in the eponymous offering "Rayman" in 1995, and has been a popular staple ever since. The world he inhabits — the Glade of Dreams — is a cosmos conjured up by the mysterious, God-like Bubble Dreamer. The Bubble Dreamer imparts existence to the beings that inhabit this environment simply by imagining them.

Parents may raise an eyebrow at that premise. But the fanciful nature of the animated setting is so far beyond anything related to reality that it’s hardly likely to prove harmful. To discover the full back story, moreover, gamers must scour the instruction manual — as, despite its title, "Origins" itself contains little evidence of this elaborate creation myth.

The player’s main task consists in freeing bundles of energy known as Electoons and other animated creatures from their bubble prisons or preserving them from some form of generalized peril. That’s mostly done by controlling the limbless protagonist — who’s equipped with hands and feet, but no arms or legs — as he navigates a range of environments, riding the back of a mosquito through a glacier one minute, and then chasing a treasure chest as it scuttles across a lagoon the next.

As played for review on the new PlayStation Vita, "Origins" moves and controls smoothly, and feels pleasingly responsive to the gamer’s input. Although the action is surprisingly challenging, unlimited retries as well as an option to skip tough sections means that frustration for the less experienced can be kept at bay.

While players will initially be struck by the graphical flourishes employed on a handheld system, what really makes the game stand out from the competition is the ease of control referenced above, together with its fluid level design.

There are a few elements of concern for parents, including a good deal of hand-to-hand violence and the scantily clad nymphs who appear every so often. Most of the content, however, remains unobjectionable, meaning that this title can be recommended for most age groups.