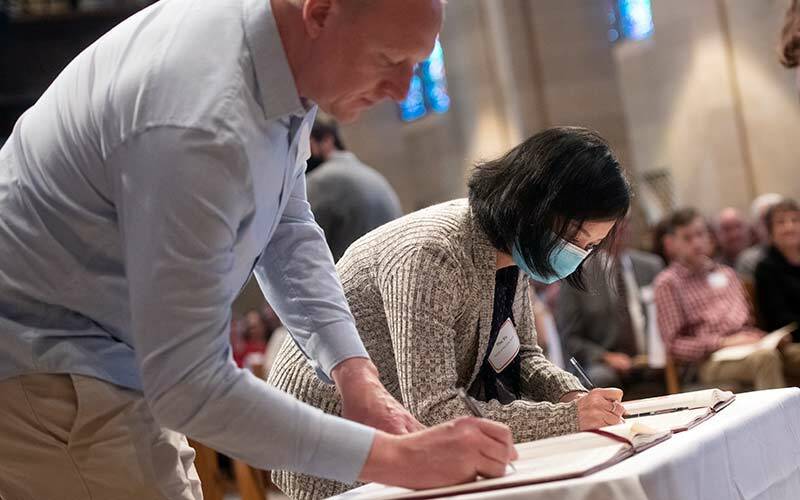 Catechumens Anthony Reish (left) and Thu Vu sign the Book of the Elect during the March 6 Rite of Election and Call to Continuing Conversion at Rochester’s Sacred Heart Cathedral. (Courier photo by Jeff Witherow)

Alexis Rippey knew she wanted to become a Catholic, but feared she might be looked down on because she’d never been baptized.

Her journey through the Rite of Christian Initiation of Adults banished those fears.

“I’ve realized it’s not so much about when your journey starts,” Rippey said. “You will get where you need to be, when you need to be there. It seems that now is my time.”

Rippey is one of more than 100 people throughout the Diocese of Rochester currently preparing to join the Catholic Church, according to Don Smith, diocesan coordinator of sacramental catechesis and family life.

Over 40 of those people are “catechumens” who, like Rippey, are preparing for the sacraments of baptism, first Eucharist and confirmation. The remainder are “candidates” who already have been baptized in recognized Christian rites and now are preparing for first Eucharist and confirmation. Most candidates and catechumens will receive their sacraments and be received into the Catholic Church during Easter Vigil liturgies at their home parishes.

Rippey will be baptized at St. Mary Church in Canandaigua on Pentecost Sunday. She and her parents, Kimberlie and Chris Noyes, and her aunt also will receive first Eucharist and be confirmed that day, according to Teresa Dunn, pastoral associate and stewardship coordinator at St. Benedict Parish, which has worship sites in Canandaigua and East Bloomfield.

One additional catechumen and one candidate from St. Benedict will be received into the church at the Easter Vigil. Rippey and her family began their RCIA journey a few years later than the other candidate and catechumen, so their timeline understandably is a little different, Dunn said. Several others are just beginning the RCIA and will continue to work through the process over the summer, she said.

“We’re really trying to institute a year-round RCIA process, so that anybody at any point who really feels called to the Catholic Church can come and start that journey at any point,” Dunn said. “We tried to open it up that way so that when the Holy Spirit speaks and people feel called, they’re not coming to us in June and we’re saying, ‘Oh, I’m sorry, you can’t come until September.’”

The RCIA process at Cornell Catholic Community is based on a similar approach, according to campus minister Matthew Hall. The Catholic community tries to avoid a “one size fits all” approach, he added.

“The Spirit moves where he wills. He calls people at all different times of the year and at all stages of their Christian formation,” Hall explained.

When an individual comes forward to inquire about becoming Catholic, Hall or the community’s director, Father Daniel McMullin, will engage the person in conversations about prayer and begin building relationships, which can be “the basis for sharing the good news and joining a shared Christian life,” Hall said.

Journeying with people in a meaningful way and exposing them to the Good News — the Gospel — can inspire people to want to join the Catholic Church, Smith remarked.

“We have a great opportunity to show the face of Christ to the searchers,” he said. “Evangelization is needed now more than ever, and we have the opportunity to do it.”

By building relationships with “searchers,” catechists provide spaces where discerners feel comfortable asking questions about the Catholic faith, Hall said. About 10 people currently are meeting with Hall and Father McMullin and attending Cornell Catholic Community’s Masses and community events while discerning whether they’re being called to Catholicism, he said. Eight people currently are preparing to receive the sacraments of initiation this spring, and three more are preparing to be received into the church in 2023, he added.

“The advantage of a long, robust inquiry process is that once the discernment is made to formally begin formation, candidates and catechumens are already invested and thirsting to go deeper,” Hall said.

Rippey said the seeds of her desire to become Catholic were similarly sown long ago. Although her parents had been baptized in other Christian denominations, the family attended Mass at St. Mary Church periodically.

“We were already somewhat a part of the community but wanted to make it official,” Rippey said. “I’m excited to participate as a member, coming to our church.”