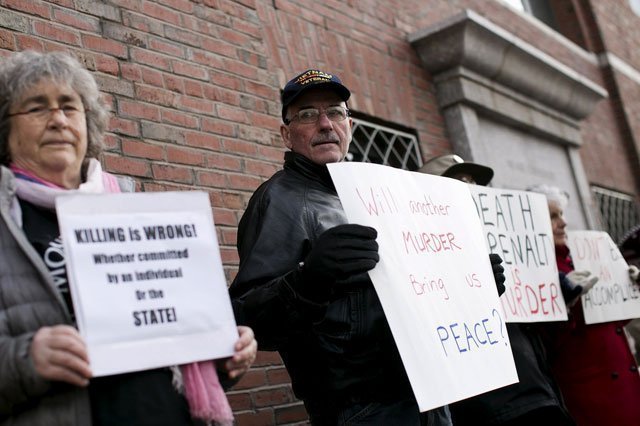 Protesters against the death penalty hold signs before closing arguments took place April 6 in the trial of accused Boston Marathon bomber Dzhokhar Tsarnaev at the federal courthouse in Boston.

Reaction was mixed to the May 15 jury sentencing of death for Dzhokhar Tsarnaev for his role in the 2013 Boston Marathon bombing.
Tsarnaev had been convicted April 8 of all 30 counts lodged against him in the bombing, which killed three people and injured hundreds. Of those 30 counts, 17 carried the death penalty, and jurors imposed the death sentence on six of those — all in connection with placing a bomb on Boylston Street along the marathon route.
“Catholic Mobilizing Network prays for the victims of the Boston marathon bombing, their families, and all those whose lives have been touched by violence,” said a May 15 statement by the Catholic Mobilizing Network to End the Use of the Death Penalty.
“We believe in the dignity of all human life. Our faith calls us to be hopeful for the salvation of all. We stand with our church and with Pope Francis, who reminds us that ‘God is in everyone’s life. Even if the life of a person has been a disaster.’ We should never deny the opportunity for God to transform the lives of even those who have committed heinous acts. We cannot teach that killing is wrong by killing.”
The death sentence levied against Tsarnaev “perpetuates the use of an unfair, unjust practice that is disproportionately used on poor people and people of color,” said a May 15 statement from Diann Rust-Tierney, executive director of the National Coalition Against the Death Penalty.
“We had held out hope for a different punishment, given that the majority of people in Massachusetts, including many of the victims’ family members, oppose the death penalty and have outlawed it in their state. We express our sincerest condolences for the victims of the attack and their families.”
The penalty phase of the trial was highlighted by the struggle between the prosecution and the defense over whether Sister Helen Prejean, a Sister of St. Joseph, author of “Dead Man Walking” and longtime opponent of capital punishment, should be allowed to testify. The defense won that skirmish, but Sister Prejean’s assertion that Tsarnaev was “genuinely sorry” for his actions did not sway the jury.
“My mother and I think that NOW he will go away and we will be able to move on. Justice,” Sydney Corcoran wrote May 15 on her Twitter account. Corcoran was severely injured in the bombing; her mother lost both legs.
Heather Abbott, who lost a leg in the bombing, wrote May 15 on her foundation’s Facebook page that the verdict “doesn’t bring me peace.” Instead, she said, “it brings sadness and cause to reflect, again, on just how senseless all of the deaths and injuries resulting from this situation are.”
U.S. Attorney General Loretta Lynch, in a May 15 statement, called the Tsarnaev’s sentence “fitting punishment” for a “coldly and callously perpetuated attack that injured hundreds of Americans and ultimately took the lives of three individuals.” Lynch added she hoped the verdict “will bring some measure of closure to the victims and their families.”
The Boston Marathon bombings were termed the worst terror attack on U.S. soil since the 9/11 attacks. It was also the first time federal prosecutors had successfully sought the death sentence for terrorism since the 9/11 attacks.
Liz Norden, whose two adult sons each lost a leg, told the Boston Globe she was reminded of the bombings every day. “There are no winners today, but I feel justice for my family,” said Norden, who followed the trial. “I have to watch my two sons put on a leg every day. So I don’t know about closure. But I can tell you it feels like a weight has been pulled off my shoulders.”
Karen Brassard, a spectator badly injured by shrapnel in the bombing, told the New York Times after the jury verdict, “Happy is not the word I would use. There’s nothing happy about having to take somebody’s life. I’m satisfied, I’m grateful that they came to that conclusion, because for me I think it was the just conclusion.”
In early April the Catholic bishops of Massachusetts released a statement reiterating the church’s teaching on the death penalty.
The Catholic Church opposes the death penalty except “if this is the only possible way of effectively defending human lives against the unjust aggressor,” but such cases “are very rare, if not practically nonexistent.”
In Tsarnaev’s case, the Massachusetts bishops said, the defendant “has been neutralized and will never again have the ability to cause harm. Because of this, we … believe that society can do better than the death penalty.”
In a letter published in the Boston Globe April 17, the parents of Martin Richard, who at age 8 was the youngest victim killed in the Boston Marathon bombings, had asked that U.S. Justice Department take the death penalty “off the table” for Tsarnaev and sentence him to life without the possibility of parole.
“We know that the government has its reasons for seeking the death penalty, but the continued pursuit of that punishment could bring years of appeals and prolong reliving the most painful day of our lives. We hope our two remaining children do not have to grow up with the lingering, painful reminder of what the defendant took from them, which years of appeals would undoubtedly bring.”
The Richards said they believed that “now is the time to turn the page, end the anguish, and look toward a better future — for us, for Boston, and for the country.”
Copyright (c) 2015 Catholic News Service/U.S. Conference of Catholic Bishops
Copyright © 2022 Catholic News Service, Inc. All rights reserved. Linking is encouraged, but republishing or redistributing, including by framing or similar means, without the publisher's prior written permission is prohibited.