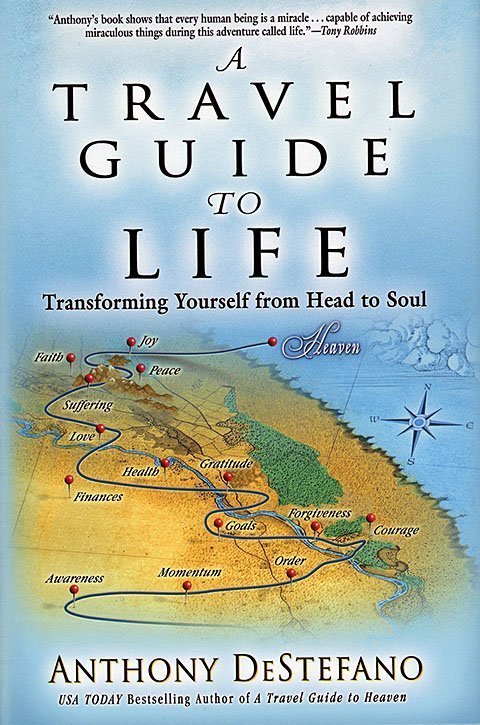 This is the cover of "A Travel Guide to Life: Transforming Yourself from Head to Soul" by Anthony DeStefano. The book is reviewed by Maureen E. Daly.

Don’t be put off by the opening tone in Anthony DeStefano’s new book, "A Travel Guide to Life." Advice to "Get off your pity-pot!" and "Get moving!" may strike readers as both too harsh and too casual.

But give DeStefano time, and you’ll find real wisdom in his chapters on setting goals and bringing order out of chaos, and in his common-sense yet spiritually grounded focus on life’s practical challenges.

DeStefano says he set out to write a "how-to" book that would show readers "how to embrace a joyful view of life without being self-delusional" as well as how to keep faith in God and humanity, avoid despair and take practical actions to transform their lives.

This is the work of a mature writer and it is addressed to the adult reader, perhaps even in late adult life. It is a guide for changing life’s direction, suitable for those with some life experience.

DeStefano emphasizes the role of free will and self-discipline in living a happy life. He believes we sin, and that guiding principles are not based on feelings but on choices. He tells readers that spiritual well-being begins with three spiritual decisions: to have faith, to repent of our sins and to forgive people when they sin against us.

The author narrates a six-part miniseries of half-hour shows that summarize the book’s main points and can be viewed on the Eternal Word Television Network. Using the book as a guide to life would be more time-consuming.

Steps to transform one’s life can be expressed in a few sentences. But hours of work may be required, not just once, but over and over, to put the steps into action.

For example, in the chapter on "Goals and God’s Will," DeStefano asks readers to first "come up with goals that inspire you." He then lists self-examination questions that would take the serious reader some time to complete.

In step two, the reader should write down all the goals "and put them in a place where you’ll remember to look at them." The author recommends reading the goals at regular intervals, a long-term practice that he believes will, in itself, cause the reader to move toward the goals and to recognize opportunities.

Finally, he advises that the reader create a list of action steps for the goals. Readers might feel daunted at this point by DeStefano’s demands. He softens the lesson by telling a story from his own life.

As a young adult he abandoned his childhood goal to be a doctor and became a writer. Several years passed before he set the goal to be a spiritual writer. Ten more years passed before he laid out the action steps that enabled him to fulfill this goal. Once he had the action steps, he wrote his first spiritual book, "A Travel Guide to Heaven," in just six months and it became a best-seller.

For readers ready for work of the journey, DeStefano has produced a reliable road map.

Daly, a Baltimore-based writer, earned a master’s degree in theology from the Ecumenical Institute of St. Mary’s Seminary and University in Baltimore.