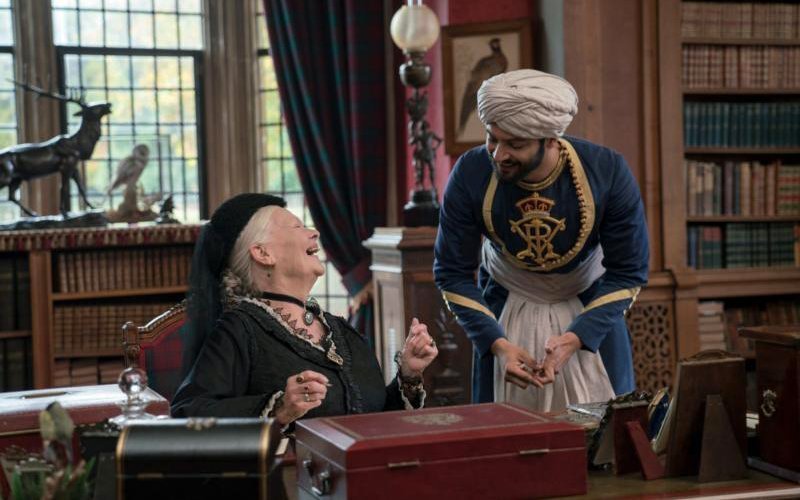 Judi Dench and Ali Fazal star in a scene from the movie "Victoria and Abdul."

NEW YORK (CNS) — Judi Dench is no stranger to playing royalty, and she shines once again as the titular queen in “Victoria and Abdul” (Focus).

Beginning in 1887, director Stephen Frears’ historical drama, adapted from the book by Shrabani Basu, follows the unlikely adventures of Abdul Karim (Ali Fazal), a lowly clerk at the local prison in Agra, India. He’s a tall and handsome 24-year-old, and it’s these traits that cause him to be selected to present a mohur, a ceremonial gold coin, to Victoria during her golden jubilee.

Undertaking a four-month journey by sea together with grouchy Mohammed (Adeel Akhtar), another randomly chosen native of the subcontinent, Abdul gets to England only to be trussed up in an artificial version of Indian servant clothing and instructed in the proper etiquette for the state occasion.

Feeling nervous and out of place, Abdul promptly violates the most important of the rules that have been laid down for him by catching the bored queen’s eye and flashing a quick smile, which she returns. The next day, she requests Abdul’s presence as her personal attendant.

Thus begins an unusual friendship. Young and naive about proper British restraint in the presence of the sovereign, Abdul engages Victoria in enthusiastic conversation, regaling her with descriptions of the Taj Mahal and the broader culture from which he springs. He progresses from servant to private secretary and finally becomes her teacher, instructing her in Urdu.

Abdul’s innocence and lack of pretension provide a breath of fresh air for Her Majesty, surrounded as she is by pompous politicians and stuffy ladies-in-waiting always trying to curry her favor. But the closer their relationship grows, the more antagonism the royal household — led by the queen’s eldest son and heir, Bertie (Eddie Izzard) — unleashes on the newcomer.

The platonic bond at the heart of the plot is sweet and endearing. But the film’s attitude toward colonialism seems overly simplified. When Victoria refers to herself as empress of India, for instance, Abdul just smiles and nods. Mohammed is more clear-eyed in his analysis, but his resentment is kept on the sidelines.

“Victoria and Abdul” celebrates its main characters’ loyal attachment as well as openness, tolerance and respect for those from different backgrounds. When we take the time to get to know people for who they really are, Lee Hall’s script suggests, we may be surprised to find that our shared humanity means we have more in common with them than we might, at first, suspect.

Taken together with the movie’s historical value, such ethical insights may lead at least some parents to consider “Victoria and Abdul” acceptable for older adolescents.

The film contains a couple of uses of profanity, at least one milder oath, about a half-dozen crude and a pair of crass terms. The Catholic News Service classification is A-III — adults. The Motion Picture Association of America rating is PG-13 — parents strongly cautioned. Some material may be inappropriate for children under 13.