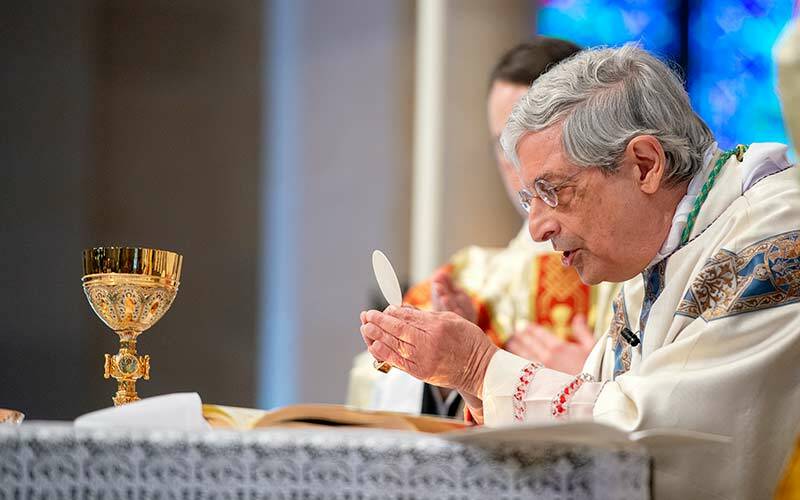 ROCHESTER — Catholic doctrine on the Real Presence of Christ in the Eucharist can be grasped by young children, Father Peter Van Lieshout has found while instructing first communicants on the subject.

“You don’t need to be a theologian to understand the basics of eucharistic theology,” added Father Van Lieshout, rector of Sacred Heart Cathedral.

Yet too many adult Catholics don’t understand or accept this essential doctrine of the faith — a situation he said he’s working to change.

Father Van Lieshout discussed church teaching on the Real Presence in a presentation on “The Eucharist and the Sacred Heart” at Irondequoit’s St. Cecilia Church May 28. He was slated to give a similar talk soon at the cathedral as part of diocesan initiatives related to the three-year National Eucharistic Revival, which officially begins in June 2022.

“I’m always happy to have an opportunity to revisit the greatness of this gift we have in the Eucharist,” he said.

Communion is the body and blood of Jesus Christ

Catholic teaching holds that the Eucharist is the Real Presence — the true body and blood of Christ, transformed from bread and wine as a priest-celebrant performs the act of consecration at Mass. The process is known as “transubstantiation.” From that point on, bread and wine no longer exist despite their outward appearances, according to Catechism of the Catholic Church No. 1375. Thus, when the faithful come forward for Communion, they receive Christ’s body and blood.

“We believe in the Real Presence, but also the ‘real absence’ after the consecration,” Father Van Lieshout said. “What was bread and wine is not bread and wine anymore.”

He added that while leading a first Communion class at the cathedral earlier this year, he’d asked the children if they saw bread or wine on the altar after he had consecrated them, and they correctly answered “no.”

Jesus himself performed the first consecration at the Last Supper, when he said, “This is my body,” while holding bread he had just broken, and, “This is my blood,” while holding a cup of wine, Father Van Lieshout noted. He emphasized that Christ didn’t say the bread and wine became a reminder or a portion of his body and blood, but that they were turned — wholly — into his actual body, blood, soul and divinity.

The doctrine of the Real Presence doesn’t add up from a sensory perspective, Father Van Lieshout acknowledged, and therefore can be difficult to embrace. However, since it was pronounced by Christ himself, no further proof is needed, he said.

“It’s accepted by faith on the word of our Lord. He said, ‘This is my body and this is my blood’ — and he meant what he said,” Father Van Lieshout remarked.

Belief in the Real Presence is essential to Catholicism, Bishop Salvatore R. Matano stated in his 2017 pastoral letter on the Eucharist.

“Our belief in the Real Presence of Christ, body, blood, soul and divinity, the very One Whom we receive in Holy Communion is, therefore, what truly identifies us as Catholics, Christians firmly believing in Christ, uniting us with our ancestors in the faith who first celebrated the Eucharist in the very shadow of Christ’s earthly ministry,” Bishop Matano wrote.

Yet a 2019 Pew Research study found that 69 percent of self-identified Catholics do not believe in the Real Presence. Father Van Lieshout called that statistic “a wound in the heart of the pastor, whose life revolves around the Eucharist.”

What can be done to convince them?

Father Van Lieshout suggested that parishes begin by committing more deeply to “some solid catechesis” for people whose lack of belief stems from a lack of understanding about the Real Presence.

He also called for Catholics to display solemn, visible reverence throughout Mass, especially at Communion — thus calling themselves and others to reflect more deeply on the importance of receiving the Body of Christ.

“When that obstacle is removed, then their life with the Lord in the Eucharist is strengthened. It’s sort of a package deal,” he said. “The more you come to see the beauty of the entire Catholic faith, the more you’re going to grow in love and appreciation for what the Lord gave us at the Last Supper.”

Tags: Eucharistic Revival
Copyright © 2023 Rochester Catholic Press Association, Inc. All rights reserved. Linking is encouraged, but republishing or redistributing, including by framing or similar means, without the publisher's prior written permission is prohibited.