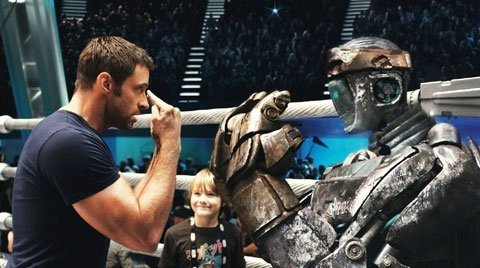 NEW YORK (CNS) — The results of recycling never looked so good — or so menacing — as they do in "Real Steel" (Disney), an action-packed drama about robots who box and the dysfunctional humans who manipulate and fix them.

Director Shawn Levy ("Date Night," "Night at the Museum") weaves the wizardry of computer-generated imagery with the sentimentality of such pugilistic classics as "The Champ" and "Rocky" while charting the newfound relationship between an estranged father and son. This duo eventually learns — between brutal matches — that blood is thicker than hydraulic fluid.

In the not-too-distant future, 8-foot-tall, 2,000-pound robots have replaced human beings in the ring. The World Robot Boxing League offers all the razzle-dazzle of professional wrestling as ‘bots beat each others’ motherboards out, maneuvered by people using video-gamelike controls.

One such is Charlie Kenton (Hugh Jackman), a washed-up fighter who makes the rounds of country fairs with his robot, grubbing for prize money. Pining for him back at the gymnasium-cum-repair shop is Bailey (Evangeline Lilly) — a gal who’s pretty handy, we learn, with a soldering iron.

Charlie’s world is turned upside down with the arrival of Max (Dakota Goyo), his 11-year-old son from a one-night stand. Mom has died, and her sister Debra (Hope Davis) wants custody. Adrift, amoral and broke, Charlie agrees to "sell" his son for $50,000. The catch? He needs to watch Max for the summer while Debra goes on vacation.

Thus begins a very odd road movie. While sizing up his dad, Max is entranced by the robots and the fighting scene. Soon he has his own mechanical warrior, discovered while scrounging the recycling dump for spare parts.

"Atom," as he’s called, may be an old-model machine but he’s no slouch. He’s original, intuitive, a mimic and rather a good dancer. Atom and Max bond in the spirit of "I Robot" and the "Transformers" movies. Soon, with Charlie’s training, Atom begins winning against-the-odds victories.

It all points, rather predictably, to the underdog getting his chance at the world title in a match against "Zeus," the Apollo Creed of ‘bots. Can David beat Goliath? Will a coldhearted father warm to his hyperactive son, accept his responsibilities, and make a family?

Yo, Adrian — I mean, Bailey! Cue the crocodile tears! (Despite the elements listed below, "Real Steel" is probably acceptable for older adolescents.) The film contains cartoonish action violence, references to an out-of-wedlock pregnancy, a bit of crude language and some mild oaths. The Catholic News Service classification is A-III — adults. The Motion Picture Association of America rating is PG-13 — parents strongly cautioned. Some material may be inappropriate for children under 13.