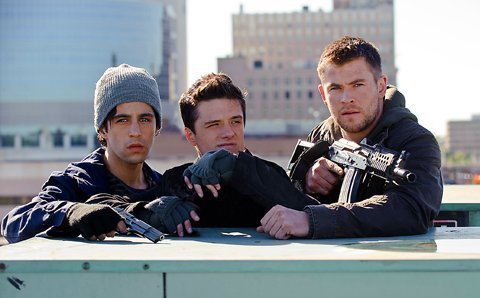 NEW YORK (CNS) — Gleefully paranoid, hyperviolent and more than a little racist, the remake "Red Dawn" (FilmDistrict) is a time-waster for the tinfoil hat set.

The 1984 original pitted American youths against invading Russkies, to use the vintage term. It played out against the "Evil Empire" stage of the Cold War — a time when the Soviet Union was actually in decline, but both nations were still aiming considerable nuclear weaponry at each other, as they had done since the 1950s.

This time, director Dan Bradley and co-writers Carl Ellsworth and Jeremy Passmore launch a North Korean air invasion on the Pacific Northwest. The monolithic but clever commies have shut down the whole power grid using some secret technology. So, no TV, Internet or radio communications, except for what can be done with batteries.

Not a problem for a bunch of plucky teens led by ex-soldier Jed (Chris Hemsworth), son of Spokane Police Chief Tom Eckert (Brett Cullen). He and brother Matt (Josh Peck) transform pals Toni (Adrianna Palicki), Robert (Josh Hutcherson), Erica (Isabel Lucas) and Daryl (Connor Cruise) — along with some others — into a stone-cold militia equally adept as snipers, insurgents and survivalists.

The commandoes nickname themselves the Wolverines, after their high school mascot. The Wolverines torment the occupiers for a good 90 minutes but never manage to overthrow them, since they have neither the requisite numbers nor the necessary firepower. They also deal harshly with collaborators.

Aided by the Russians, the North Koreans, we learn, have parachuted in and overtaken most of the United States except for a portion from Alabama to Arizona, and Michigan to Montana. (In this milieu, they don’t mess with Texas.) Evidently, the Mexicans and Canadians aren’t coming to anyone’s rescue, let alone those Euro-wimps from NATO.

The Koreans are handing out summary executions, and the theme of the picture is laid out when Chief Eckert has a gun held to his head by Captain Lo (Will Yun Lee), the new local prefect.

"I want you to go to war and stop this (expletive)!" Eckert shouts to his sons, whom he knows are hiding in the vicinity, "Or die trying!"

So they fight ’em in the woods, and blow ’em up downtown. The only morality consists of getting the enemy before they get you, and skin color and eye shape largely determine who’s evil.