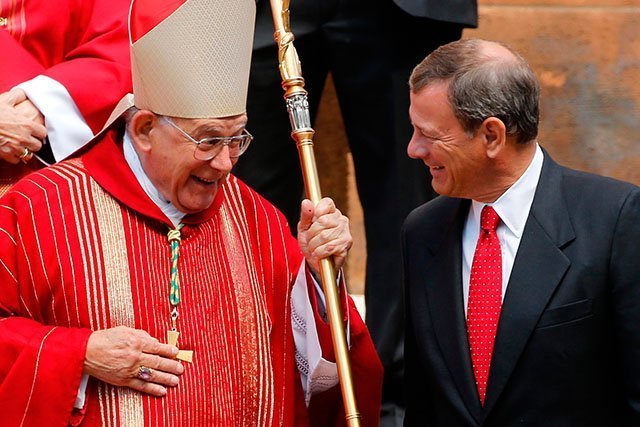 Bishop Paul S. Loverde of Arlington, Va., chats with Chief Justice of the United States John Roberts following the annual Red Mass at the Cathedral of St. Matthew in Washington Oct. 5. The Mass traditionally marks the start of the court year, including the opening of the Supreme Court term.

WASHINGTON (CNS) — Bishop Paul S. Loverde of Arlington, Virginia, principal celebrant of the annual Red Mass in Washington, prayed the congregation would be strengthened by the "presence and power" of the Holy Spirit and go "forth in such a way to bring honor and glory to God."

The Oct. 5 Mass was celebrated one day before the U.S. Supreme Court opened its new term, which always begins the first Monday of October.

Archbishop Carlo Maria Vigano, who is apostolic nuncio to the United States, and local bishops and priests were among the concelebrants at the Cathedral of St. Matthew the Apostle.

In the congregation were six members of the U.S. Supreme Court — Chief Justice of the United States John G. Roberts Jr., who will begin his 10th year on the court, and Associate Justices Antonin Scalia, Anthony M. Kennedy, Clarence Thomas, Stephen G. Breyer and Elena Kagan.

Denis McDonough, the White House chief of staff, also attended the Mass of the Holy Spirit — as it is formally called. The centuries-old tradition invokes God’s blessings on all who work for justice.

In Washington, the first Red Mass was in 1953 and continues to be sponsored by the John Carroll Society, an organization of Catholic professionals in service to the archbishop.

Earlier, Msgr. Peter Vaghi, chaplain of the John Carroll Society read a homily prepared by Washington Cardinal Donald W. Wuerl, who was at the Vatican for the extraordinary Synod of Bishops on the family.

In the written homily, Cardinal Wuerl pointed out the reason for the Red Mass.

"We know that we need, and so we ask for, the gifts of insight, inspiration, of right judgment, of wisdom — gifts of the Holy Spirit," he wrote. Of these gifts, wisdom stood for "the very personification of God’s presence and providential guidance of all creation."

Describing the gift of wisdom as "magnificent," Cardinal Wuerl noted in his homily "it is the gift we hope to see reflected in our leaders, judges, confessors, spiritual directors and parents."

But he urged the congregation to remember the "most significant cumulative effect of all of the gifts of the Holy Spirit is the power to change, to transform, to make new, to heal."

"We are here because we stand in both the conviction and expectation that it is possible to make a better world," the cardinal wrote.

Later, attorney Elizabeth Meers, president of the John Carroll Society, noted, "The gifts of the Holy Spirit — those mentioned in Cardinal Wuerl’s homily — are all things I think lawyers in whatever role are constantly in need of."

"Having those blessings of the Holy Spirit is a big help," she told the Catholic Standard, Washington’s archdiocesan newspaper.

Close to 70 members of the society served on a committee to plan the Red Mass, provide ushers and coordinate the brunch where society members honored two law firms and two individuals for their work with Catholic Charities Legal Network.

The network was formed 25 years ago when the late Cardinal James A. Hickey, then archbishop of Washington, recognized a need for pro bono legal services for the poor.

According to records kept by the Catholic Charities Legal Network, in the previous fiscal year more than 5,000 hours were donated by more than 625 attorney volunteers representing 60 law firms. Officials also estimated the value of their services to be at least $1.8 million.

In his comments recognizing the network’s 25th anniversary, Msgr. Vaghi emphasized Pope Francis’ concern for the poor. "Pope Francis continually challenges us to walk with the poor in faith and charity. This means coming to know and serve the poor in our world and in our individual lives and to seek them out as ‘preferential’ as so many of you in your work in the pro bono legal network."

"To be a Christian thus means to be like Christ and his church — a church that is poor and that is for the poor. It means following and imitating Jesus, who actively sought out the poor," Msgr. Vaghi told the 540 guests participating in the brunch.

Pruzinsky Mumola writes for the Catholic Standard, newspaper of the Washington Archdiocese.