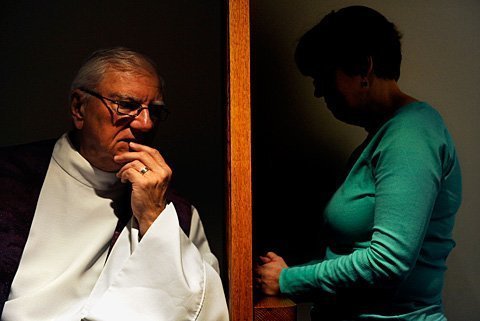 Although face-to-face confession has been an option since the 1970s, Catholics may still opt to receive the sacrament of rec-onciliation with a grill separating them from the priest. Above, Father Ed Palumbos demonstrates this form of the sacrament atFairport’s Church of the Assumption.

Does the thought of going to confession make you a little nervous?

If so, you’re not alone. For various reasons, many Catholics are apprehensive about approaching the sacrament of penance, according to Father Robert Kennedy, pastor at Rochester’s Blessed Sacrament Parish. Some balk at the thought of sharing their sins with another person, others have had negative experiences with the sacrament in the past, and still others hesitate because they’re not exactly sure what to do or say once they sit down in front of the priest.

Nonetheless, especially in this Year of Faith, Catholics are rediscovering the sacrament of penance, and when they do so they’re realizing that it’s something to be welcomed rather than feared, Father Kennedy said.

"This is a positive experience of reconciliation and grace that God in his love wants to give us. It’s about God’s mercy and forgiveness," he added.

The sacrament of penance is a gift God has given us, agreed Deacon Gary DiLallo, pastoral administrator at Ss. Mary and Martha Parish in Auburn. It’s an important and necessary gift because we all sin, break God’s commandments and fall short of God’s glory every day. Yet through the sacrament of penance, God is waiting to welcome us back and give us a second chance, much like the father in Jesus’ parable of the prodigal son, he said.

"The father is not only waiting, he is out by the road longing for his wayward children to return. Jesus tells us that this is how God feels about our reconciliation," he said. "It isn’t about our having to shame ourselves or face being scolded. It is all about letting ourselves receive the merciful and healing love and peace that only God’s love can give us."

Through the sacrament of reconciliation, God takes away our sins, wipes the slate clean and gives us a fresh start, Deacon DiLallo said, noting that this forgiveness brings deep and lasting healing.

The sacrament helps people maintain their spiritual health, similar to the way routine health screenings help people maintain their physical health, noted Father William Darling, pastor of Our Lady of the Snow Parish in northern Cayuga County. We may sometimes be apprehensive about going to confession the same way we’re apprehensive about going to the doctor for a cancer screening, but both are for our own good, he said.

"Somebody has to reconcile himself or herself to the process. I think it’s important for people to realize that a healthy spiritual life — a healthy journey to God — includes the sacrament of penance," Father Darling said.

In a video posted on http://forgiven.dor.org, the diocesan website devoted to the sacrament of penance, Bishop Emeritus Matthew H. Clark admitted there are times when he too doesn’t look forward to going to confession, even though he knows how important and grace-filled the sacrament is.

"There are some days when I’d rather get teeth pulled than go, but when I go, I love it," Bishop Clark said. "It heals the body, the mind, the spirit. It gives you a sense of wholeness and restoration."

This sacrament would not have been possible without Jesus’ sacrifice for our sins, Father Kennedy added.

"What’s at the foundation of this is the forgiveness and reconciliation that he gained for us by his death on the cross and resurrection from the dead," he said.

Evolution of a sacrament

The sacrament has evolved over the course of many centuries, Father Kennedy explained. Catholics of the second and third centuries were familiar with a practice called public penance, which was a way of dealing with such serious sins as murder and apostasy (renunciation of the faith) that were obvious to the community and threatened the community’s integrity of faith.

"It wasn’t about forgetting my morning prayers or taking the Lord’s name in vain. It was about these serious sins that really tore at the basic fabric of the church’s life," Father Kennedy said.

People who committed such sins but later repented them could be forgiven if they completed a period of public penance. Over time, however, this practice began to be associated with the criminal-justice system of the time, he said, and more and more offenses were deemed to require public penance. What’s more, a person could only do public penance once in his or her lifetime, so people who’d committed these offenses began to wait until the end of their lives to reconcile themselves with the community and with God.

In the meantime, however, a practice similar to what’s now known as spiritual direction was gaining popularity. People who had sinned went to the community’s elders or to particularly prayerful people, expressed sorrow for their sins and sought counsel from these spiritual gurus, Father Kennedy said. Sinners expressed a desire for forgiveness as well as a desire to grow in holiness, he said.

"That began to gain some speed over the centuries, so by the sixth and seventh centuries it kind of had begun to take over people’s experiences with looking for forgiveness," Father Kennedy said, noting that priests eventually became the only ones allowed to hear such confessions. This, he said, is "where modern individual confession came from."

People often wonder why they have to confess their sins to a priest rather seeking forgiveness directly from God. In order to understand why we have to confess to a priest, it’s first necessary to understand that our sins are never really private, and have a negative effect on all of our relationships, Father Kennedy said, noting that reconciliation likewise has to affect all of our relationships, since as Christians, we are all brothers and sisters in the church.

"When we have sinned, we not only offend God, but we have disrupted in some way our relationships with our brothers and sisters. Reconciliation needs to be not only with God, but also with the church," Father Kennedy said.

The human interaction between penitent (the person seeking forgiveness) and confessor during the sacrament of penance also helps make it a more tangible and healing experience, Father Darling said.

"It’s a way of God speaking back to us. I need the assurance of being forgiven, and maybe even direction of how to get out of my sin," he said.

Skilled priest-confessors can offer affirmations, challenges or words of consolation to people seeking God’s forgiveness, helping penitents appreciate their own humanity and their ongoing need for conversion, Bishop Clark noted in the video on the Forgiven website. It’s important to remember, however, that Christ is acting through the priest celebrating the sacrament of penance.

"The priest is never the source of forgiveness," Bishop Clark noted.

According to the catechism, priests’ authority to celebrate the sacrament of penance stems from Jesus’ words to the apostle Peter, as recorded in chapters 16 and 18 in the Gospel of Matthew.

"In imparting to his apostles his own power to forgive sins the Lord also gives them the authority to reconcile sinners with the church," the catechism states. "This ecclesial dimension of their task is expressed most notably in Christ’s solemn words to Simon Peter: ‘I will give you the keys of the kingdom of heaven, and whatever you bind on earth shall be bound in heaven, and whatever you loose on earth shall be loosed in heaven.’ The office of binding and loosing which was given to Peter was also assigned to the college of the apostles united to its head."

Before going to confession, penitents should complete an examination of conscience, the catechism notes. One way to do so is by reflecting on one’s own life in light of Scripture passages.

"The passages best suited to this can be found in the Ten Commandments, the moral catechesis of the Gospels and the apostolic letters, such as the Sermon on the Mount and the apostolic teachings," the catechism states.

Many people living in today’s fast-paced world don’t see the need to pause and take stock of their lives, but such reflection actually is crucial, Father Darling said. It’s also important for people to keep in mind that the sacrament of penance is an act of prayer, not a form of counseling or therapy, Father Kennedy added.

The sacrament of penance should begin with the priest warmly welcoming the penitent, said Father Kennedy, who then likes to share a Scripture passage that will encourage the penitent to trust God and be able to make a good confession. The penitent then will share his or her sins with the priest, and the two may have a brief discussion.

"We may talk briefly about where they want to improve in holy life," Father Kennedy said. "What you try to do is help them understand that even though certain things have not been done right, and they’ve sinned, certainly the mercy of God is with them. God has never let them go."

The priest then gives the penitent a penance, usually some form of prayer, fasting or good works. The penitent will pray an Act of Contrition, and the priest will absolve the penitent’s sins.