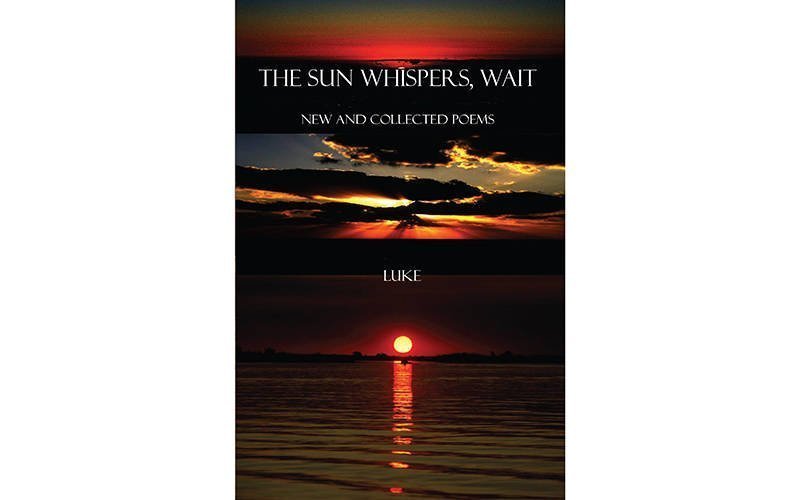 This is the book cover of "The Sun Whispers, Wait: New and Collected Poems," by Jesuit Father Joseph Brown. (CNS photo by Brown Turtle Press)

This small book, a collection of mostly new along with some earlier poems, is a gem of wisdom and craftsmanship.

Luke (Jesuit Father Joseph Brown) limns for us a disparate array of characters, starting with an aging mother who is “sewing a dress from the remnant memories of ninety years.”

We also meet a grandmamma and other forebears, living and dead, including a grandfather who recalls to his grandchild how he, too, at that age loved to read books, before he went blind.

“At the Edge” tells the story of an old woman who keeps watch with her dying husband. For anyone who has ever kept vigil at the bedside of a loved one as life ebbs, the poem’s final lines could not ring more true:

and she does not know

how to scold him to go to sleep for fear

that he would at last obey”

One of Father Brown’s most memorable characters is Chrone (short for “Chronostheos”), a mysterious man whose story is told in five parts. Since Chrone’s son ran away and got killed, we are told, he has never been the same.

People gossip that he’s crazy, wearing a wool sweater even on hot days and unable to remember where he has hidden a likely cache of money and goods. Father Brown’s depiction of Chrone and other individuals invites contemplation of family, faith, community and the simple beauty — and sometimes the sadness — of everyday life.

Another theme is the civil rights struggle in the United States. In “5 years Later: For Us (for Martin),” Father Brown captures the deep sorrow felt at the loss of the Rev. Martin Luther King Jr.:

our tears seem to make the Jordan swell its banks”

Yet the poet also evokes the hopefulness found in community action:

broken yet that we can’t

shout it children shout it

and move a mighty distance

“The Sun Whispers, Wait” also includes some lovely examples of haiku, as in:

in baskets and sets it out

for the evening fire”

Father Brown, who earned a master’s degree in Afro-American studies and a doctorate in American studies from Yale University, is a professor in the Department of Africana Studies at Southern Illinois University Carbondale.

A native of East St. Louis, Illinois, he was ordained a Jesuit priest in 1972 and has had an extensive academic and pastoral career. He also earned a master’s degree from the Johns Hopkins University Writing Seminars.

He explains in the book’s introduction that he adopted the pen name “Luke” as a way to honor the Evangelist, who “gave us sensitive pictures of shepherds, grieving parents, confused friends and acquaintances, hungry multitudes, and a man for whom words carried the weight of the world and eternity.”

Furthermore, Father Brown writes, “Compassion, understanding, forgiveness and poetry were in the telling of the tales he recorded.”

A similar observation might be made about “The Sun Whispers, Wait.”

(Nancy L. Roberts is a journalism professor at the State University of New York at Albany who has written and co-edited two books about Dorothy Day and the Catholic Worker.)