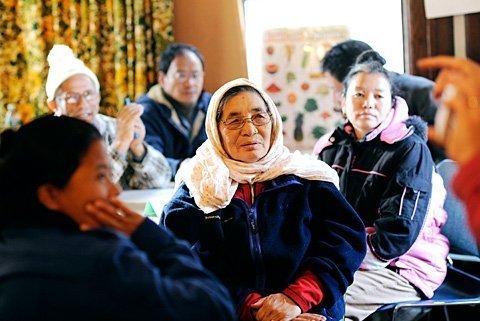 ROCHESTER — Every day Rochester residents get a visible reminder of the needs of refugees during clothing and food distributions at Mary’s Place, a refugee outreach in the former Holy Rosary rectory.

Bags of donated clothing are set out on mats on the lawn of the Holy Rosary campus. Refugees line up behind a rope, waiting patiently for their turn. When the rope drops, they rush toward the bags, take clothes out, hold them up to gauge the size and try them on.

The clothes are free for the taking for the refugees. Kathy LaBue, executive director of Mary’s Place, polices the distribution to make sure that the refugees are the only ones who pick up the clothes. Community members are able to participate after the refugees are finished.

The distributions take place outside, LaBue said, because that is the only space large enough to accommodate them.

“We had to give up some organization for meeting the needs,” she said. “And the need of the (refugee) community is great.”

After clothing is distributed, bags of onions, carrots and other vegetables, which were bought in bulk from Foodlink, are set out for the refugees, who primarily hail from Nepal/Bhutan, Burma and countries in Africa. Mary’s Place recently received a grant from the Catholic Courier/Catholic Charities Christmas Appeal that LaBue said was used to purchase food to distribute to the refugees.

LaBue and members of the Cathedral Community started Mary’s Place in 2009 after LaBue noticed refugees wrapped in sheets and walking around with only flip flops in the middle of winter. Nearly all the space in the rectory is taken up by the ministry’s programs, which include English classes, tutoring, clothing and food distributions, and programs for children.

The ministry is run by more than 300 volunteers, with no paid staff, and its serves some of the approximately 500 to 600 refugees who are resettled in the area each year.

“The story is the people right here,” LaBue said. “The people who are giving back.”

One of the volunteers who is nearly in constant motion giving back is Hla Win, 52, who relocated to the area about four years ago as a refugee with nine of his 10 children and his wife. He had lived in a camp for displaced people for more than 20 years, starting in 1978. At Mary’s Place, he does a host of tasks, including organizing the clothing and food distributions and moving furniture.

“He came in one day, and he said he is Muslim, and Muslims believe in giving back, and he wanted to give back for his children,” LaBue said. “He has been here every hour (we are open) plus some.”

“America good,” Win said in hesitating English. “Everything I like.”

Another volunteer is Lachuman Pokhrel, 42, who was once a farmer in Bhutan and who waited 20 years to come to the United States. Now he helps coordinate the ministry’s garden, which produces vegetables including cucumbers, tomatoes, beans, carrots and eggplant. He said he hopes to enlist the help of about 70 volunteers — drawn from among the refugees — to work in the garden next year.

Volunteers from the community said they enjoy coming to Mary’s Place because of its homelike atmosphere.

“I think it’s an environment that’s a safe haven for a lot of people,” said Cara Breslin, 22, of Rochester, an AmeriCorps volunteer who has worked at Mary’s Place since July. A native of Long Island, Breslin graduated in May from Nazareth College and said in the future she hopes to serve the refugee community.

Another such volunteer is Amy Hathaway of Penfield, who volunteers teaching English to the refugees. On one particular day, Hathaway was attempting to demonstrate the concept of giving. She showed a present being given, and then demonstrated and asked refugees to give each other objects. She also worked with them on other verbs and vocabulary they might encounter in a doctor’s office.

Hathaway, a retired elementary special education teacher, said she wanted to understand what refugees go through as they learn an unfamiliar language, so she tried her hand at learning colors in Nepali. It was a struggle, she said.

“It is an eye-opener; they do work very hard,” Hathaway remarked.