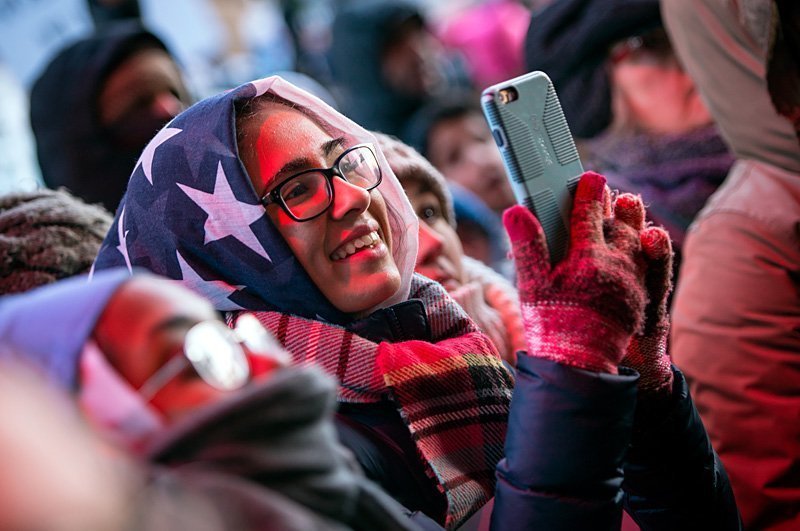 Ap Bishop will never forget the way he felt looking out at America for the first time as his plane touched down at New York’s John F. Kennedy International Airport in 2003.

"It was emotional. I broke into tears. Too many things were coming into my mind," said Bishop, a refugee from Liberia who now works for Catholic Family Center in Rochester.

Recent controversy surrounding refugees and immigration hits very close to home for Bishop, who works in CFC’s refugee-resettlement program. On Jan. 27 President Donald Trump signed an executive order that called for a 120-day suspension of the nation’s Refugee Admissions Program and a permanent ban on accepting refugees from Syria. It also barred citizens of Syria, Iraq, Iran, Sudan, Libya, Yemen and Somalia from entering the nation for 90 days and proposed giving priority to refugee applications from members of religious minorities in their own nations.

An aspect of the order that has received less media attention also called for reducing the number of refugees accepted by the United States from 110,000 to 50,000 for the fiscal year that began in October 2016, according to Jim Morris, Catholic Family Center’s vice president for family services.

Critics of the order said it discriminated against Muslims, and protests against the order and events supporting refugees broke out in cities across the nation, including in Rochester. More than 500 people attended the ROC Stands With Refugees rally held in front of Rochester City Hall on Feb. 3, and two days later a standing-room-only crowd attended a Welcoming the Stranger interfaith prayer service at Brighton’s Temple B’rith Kodesh in which Bishop Salvatore R. Matano participated.

On Feb. 3 a federal judge issued a temporary restraining order blocking enforcement of the executive order’s provisions nationwide. The Trump administration appealed the ruling, but on Feb. 9 a federal court of appeals refused to reinstate the president’s executive order. The panel of three judges from the 9th U.S. Circuit Court of Appeals unanimously upheld the lower court’s temporary restraining order, but Trump may appeal.

"These things obviously take time, and time is a good thing for us, because until there is a new legal decision we can keep doing what we’re doing, which is settling refugees," Morris said.

Although refugee-resettlement programs across the nation currently are able to receive new refugees, the programs and their staff and volunteers remain in a state of uncertainty, he added. Catholic Family Center will continue to receive refugee arrivals at least through March 3, but after that likely will settle far fewer refugees than originally planned due to the lowered national ceiling for refugee admissions.

"What this means is that only 15,000 more refugees will be allowed admission (into the country) in the next seven-month period, March through September 2017," Morris said. "To put that into context, in the same seven-month period last year, the U.S. welcomed 62,000 refugees. We also expect that the lowered ceiling of 50,000 refugee admissions will be in effect for the coming federal fiscal year that begins Oct. 1, 2017."

With a lower nationwide threshold for refugee admission, Catholic Family Center, which is the resettlement agency for the Rochester area, will be receiving fewer refugees than expected. This could negatively affect the resettlement program’s staff and ability to offer programs, but also means greater numbers of refugees will continue to suffer and remain "in precarious situations where their lives are threatened," he said.

Bishop had been forced to flee his homeland with his wife and their three children after the second Liberian civil war escalated around 2000, and those who didn’t favor the government or refused to take up arms were persecuted and in danger, he said. Bishop said he knew he couldn’t participate in the violence, so he and his family fled to the Ivory Coast, where they lived for two years until violence and persecution followed them there. At that point the United Nations moved the family into a refugee camp, where his fourth child was born and his wife died when the infant was just two months old.

The refugee camp, which housed nearly 500 people, was overcrowded, lacked schooling for the children and had insufficient medical care, Bishop recalled. The process of applying to come to the United States as a refugee was lengthy and involved and required multiple interviews before Bishop finally learned he and his family would be admitted.

"It was like a dream come true after going through what we’d been through. I couldn’t believe it. I just thanked God," Bishop said.

Catholic Family Center’s staff and volunteers helped Bishop and his family find a place to live and adjust to their new surroundings. Bishop got a job with Wegmans and eventually went to college. He currently works with refugees as a job counselor and studies political science at SUNY Brockport and hopes to eventually earn a master’s degree and work in public service. None of this would have been possible, he said, without the help of Catholic Family Center’s staff and especially volunteers, who were there for Bishop and his family "day in and day out."

"I could not say with words how to say thank you to these people," he said.