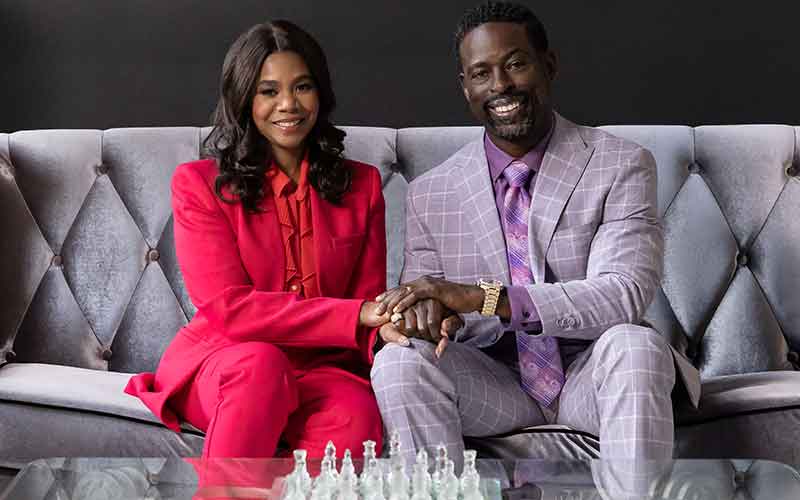 Regina Hall and Sterling K. Brown star as Trinitie and Lee-Curtis Childs in “Honk for Jesus. Save Your Soul.” (Courtesy of Focus Features).

NEW YORK – Believing movie fans are bound to be wary of a production titled “Honk for Jesus. Save Your Soul” (Focus). As it turns out, however, writer-director Adamma Ebo’s send-up of African American megachurches targets the wrongheaded “prosperity gospel” and so is unlikely to offend the adherents of more traditional versions of Christianity – at least on the score of irreverence.

On the rebound from a sex scandal that has emptied their pews, brash, rich pastor Lee-Curtis Childs (Sterling K. Brown) and his long-suffering “First Lady,” Trinitie (impressive Regina Hall), try a series of tactics to boost the imminent reopening of their parish. These measures include being filmed for a cinema verite-style documentary, the makers of which adopt a non-interfering, fly-on-the-wall strategy.

Along with other disheartening developments, the Childs come up against stiff, though thinly concealed, opposition from Shakura and Keon Sumptor (Nicole Beharie and Conphidance). These latter spouses are the co-pastors of the competing house of worship to which the vast majority of the Childs’ former congregants have switched their allegiance.

Ebo flails Lee-Curtis’ hypocrisy both through his materialism – he loves expensive clothes, stylish sports cars and even boasts of owning a helicopter – and through the initially disguised nature of his transgressions. She also explores the plight of the far more sensitive, sometimes smoldering, Trinitie.

But the humor eventually wears thin and never quite jells with the movie’s more serious material while an explicit bedroom scene makes Ebo’s lampoon pungent fare even for adults. Thus, while it only derides the contradiction inherent in using the Bible as a recipe for quick riches – as well as the outlandish bad taste of at least one over-the-top religious image – “Honk” is unrestrained in other ways that limit its appeal.

Look for: Sly satire and marital loyalty amid challenging circumstances. Look out for: Semi-graphic married lovemaking, including an aberrant act, references to homosexuality, about a half-dozen uses of profanity, a few milder oaths, numerous rough terms and occasional crude and crass language. The Catholic Moviegoer’s guidance is L – suitable for a limited mature audience. The Motion Picture Association rating is R – restricted. Under 17 requires accompanying parent or adult guardian.