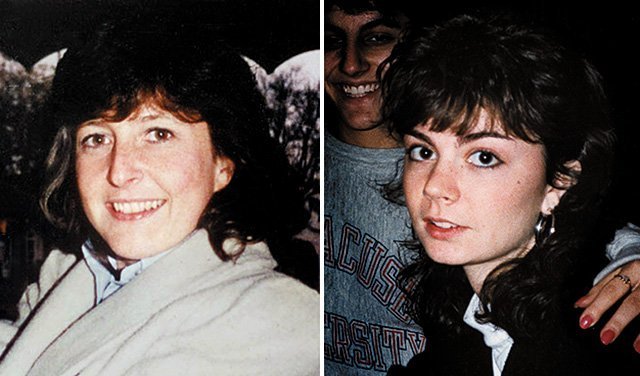 Lorraine Halsch (left) and Karen Hunt lost their lives when Pan Am Flight 103 was bombed over Lockerbie, Scotland, 25 years ago.

That’s how Paul Halsch describes the annual ritual of sifting through scholarship applications and essays written by high-school students whose lives have been altered by violence.

Halsch is no stranger to heartbreak from violence, having lost his 31-year-old wife, Lorraine, his unborn child, his brother-in-law, and his father-in-law in the bombing of Pan Am Flight 103 over Lockerbie, Scotland, 25 years ago on Dec. 21, 1988.

Halsch, who at the time of the bombing lived in Perinton and attended Church of the Assumption, moved to Maryland several years ago.

But by endowing a scholarship fund at the Rochester Area Community Foundation in his wife’s memory, Halsch over the years has been able to make something good out of his suffering.

"It’s at once the most heart-wrenching, as well as most gratifying, thing," Halsch said of reading the scholarship essays, which detail how violence has touched applicants’ lives. "You are going to make a difference in someone’s life."

The scholarship also is a way for him to help his now-grown daughter, Kelly, to connect to the memories of her mother, who deeply valued the power of education as a special-education teacher. Kelly was 11 months old when her mother was killed and graduated from Our Lady of Mercy High School in 2006.

Halsch and his daughter and representatives of the community foundation select the scholarship recipient each year.

A scholarship is one of the ways that a Webster family memorialized their daughter and sister, Karen Hunt, a 20-year-old Syracuse University student who was among 35 from the college killed in the bombing.

Bob Hunt, his wife, Peggy, and their daughter, Robyn, established a scholarship in Karen’s memory through the Webster Central School District. It is for high-school students who plan to major in English or journalism, as Karen Hunt was majoring in English and hoped to become a magazine writer.

She was returning from a semester studying abroad in Europe when she was killed on the flight. The teapot she had been transporting as a gift for her mother was one of the few items to survive the flight, and it is now among the family’s most prized possessions, Bob Hunt said.

A composer named Richard Newbegin, moved by the poem "Somewhere My Friend" that Karen had penned, composed "Karen’s Song," which is available for purchase online to benefit the Ronald McDonald House. Newbegin had seen the poem on a memorial plaque for Karen at the memorial site in Lockerbie, Hunt said.

"It’s always heartwarming to see how Karen affected people in her life — and in her death," he said.

He noted that people continue to contact the family about how they have been touched by Karen’s story, which is permanently preserved at Syracuse University in its special archive on the Pan Am 103 bombing and the victims of the tragedy. The archive also preserves historical accounts of the process to bring perpetrators to justice.

Deemed an act of terrorism, the bomb that exploded the flight from London’s Heathrow Airport to New York’s JFK Airport killed 259 people and the Halsch’s unborn child on the plane, as well as 11 people on the ground. According news clippings on the Syracuse archives website, two Libyan intelligence agents were indicted by an American court for the bombing: Abdel Basset Ali al-Megrahi and Lamen Khalifa Fhimah. In 1999, the suspects were handed over and formally indicted on terrorism charges. Ali al-Megrahi was found guilty in 2001 and jailed; Fhimah was found not guilty and freed. Ali al-Megrahi developed prostate cancer while in jail and was released in 2009 on compassionate grounds to be with family, to international protests. He died in 2012.

Attempts continue to bring suspected co-conspirators to justice, according to the Syracuse archives’ website. Hunt said the families of victims have been very frustrated over the slow process of justice.

The Hunts, members of St. Paul Parish in Webster, said their faith helped them to get through the difficult times since the bombing. Bob Hunt said Father Ray Booth often helped comfort their family. They consulted him, for instance, when they were puzzling over the unexpected and inexplicable ringing of a bell on their Christmas tree, which brought to mind the pivotal bell-ringing in the movie "It’s a Wonderful Life."

"We mentioned it to Father Ray, and he said, ‘It doesn’t matter what made the bell ring. The point is, the bell rang,’ " Hunt said.

He said instead of getting over their grief, the family has learned to live through it.

"That’s where the faith comes in," he said. "You know that she’s in a better place."

It’s something that Halsch echoes too. His daughter, he points out, is now an author of faith-based books written for teenage girls, and he said her faith often eclipses his.

They say their lives may have changed in one terrible instant, but their faith — miraculously — survived.