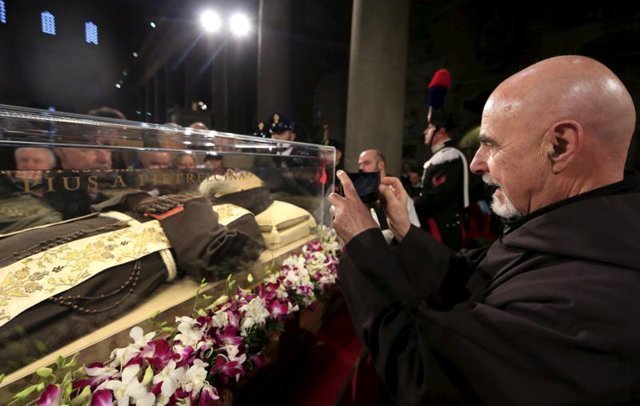 A Franciscan friar takes a picture of the crystal coffin containing the exhumed body of St. Padre Pio at a Catholic church in Rome Feb. 3. Pope Francis asked the Capuchins to bring the relics of St. Padre Pio and St. Leopold to Rome for the Year of Mercy, particularly the Feb. 10 celebration of Ash Wednesday and the commissioning of the official "missionaries of mercy."

ROME (CNS) — Thousands of people waited hours outside a Rome church to glimpse the mortal remains of St. Padre Pio and St. Leopold Mandic, two Capuchins popular as miracle workers and known particularly for the long hours they would spend hearing confessions.

Pope Francis asked the Capuchins to bring the relics of St. Padre Pio and St. Leopold to Rome for the Year of Mercy, particularly the Feb. 10 celebration of Ash Wednesday and the commissioning of the official "missionaries of mercy."

The hearse carrying Padre Pio’s crystal coffin was about 90 minutes late getting to Rome’s Basilica of St. Lawrence Feb. 3 because pockets and clusters of faithful repeatedly forced it to slow down as it drove from San Giovanni Rotondo, 235 miles to the southeast.

Posters pasted up all over the center of Rome giving the detailed schedule for Masses, prayer services and other devotions feature a large photo of Padre Pio and a smaller photo of St. Leopold.

In the celebrations, St. Leopold "is given the backseat, but that’s been his life," said Capuchin Father Clayton Fernandes, secretary-general of the order. St. Leopold was a Croatian-born friar who ministered in Padua, Italy, and died in 1942. Father Fernandes said, "He was 4-feet-5-inches tall," and was known to prophesy and to levitate.

While St. Leopold is well known in Croatia and around Padua, his fame pales in comparison to that of Padre Pio, who was born in 1887 and died in 1968.

From 1918 to the very end of his life, Padre Pio bore the stigmata, wounds similar to those inflicted on Christ when he was crucified.

"People realized that this was not just an ordinary guy; he had special gifts," Father Fernandes said. His primary gift was the ability "to read hearts, he could tell you what you were going through before you told him." He also was said to bilocate.

"Padre Pio is special for all these reasons and more," Father Fernandes said. "Padre Pio has won the hearts of the people because he spoke to their reality, the reality of a family that struggles because of economic difficulties, because they have someone who is sick."

"We need more Padre Pios today: priests, confessors, even laypeople who just take the time to listen to another and say, ‘I’m interested in what you are going through. Maybe I can’t do much, but remember, I think about you and pray for you.’ This is precisely what Padre Pio did and continues to do," Father Fernandes said.

At the same time, there are stories of Padre Pio yelling at people and being harsh with penitents. While Padre Pio was not always gentle, Father Fernandes said, he seemed to know what was needed to bring each individual to conversion.

"He was tough," Father Fernandes said. People would flock to him, expecting him to work a miracle, "but they didn’t want to change."

"Conversion is a process that starts with me," he said. Padre Pio or any good confessor, spiritual guide or friend can help people on the path, but it takes a personal decision.

"This is the secret to his success, you could say: He was able to look deep into people and say, ‘Look, what you are asking for is not really what you need. You need something more’ or ‘you need something different,’" Father Fernandes said. He was like any good father, who knew that sometimes what a child asks for is not what the child really needs.

The Capuchin also insists that Padre Pio "was not a one-man show." The other friars in his community and in his province supported his work and assisted him, especially in replying to the thousands of letters that would arrive each week. "They believed that he had a special gift from God, not that he was perfect."

"There is one precise reason why Pope Francis wants Padre Pio and St. Leopold (at the Vatican for the jubilee)," he said: "It’s because they are missionaries of mercy. And mercy as encountered in confession. These are two friars who spent the big part of their life in the confessional."