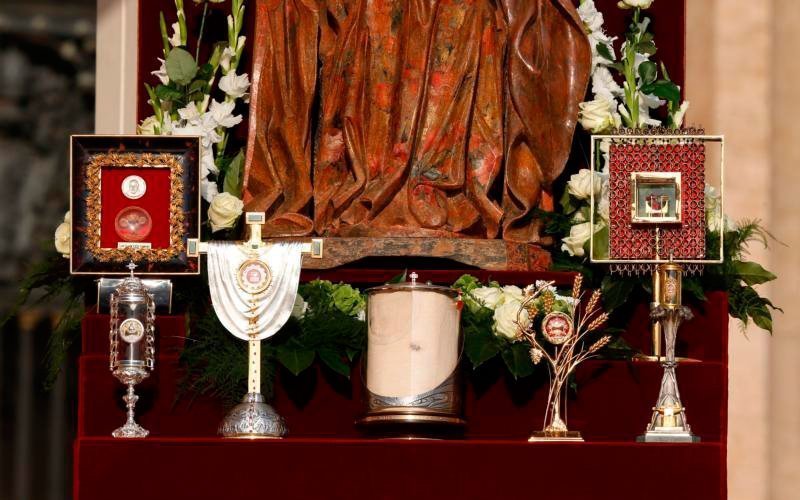 The relics of new saints are seen before the canonization Mass for seven new saints celebrated by Pope Francis in St. Peter's Square at the Vatican Oct. 14. Among the new saints are St. Paul VI and St. Oscar Romero.(CNS photo by Paul Haring)

Saints risk all for love of Jesus, pope says at canonization Mass

VATICAN CITY (CNS) — Pope Francis and many people attending the canonization Mass in St. Peter’s Square were alive when St. Paul VI and St. Oscar Romero were alive, but the new saints’ relics and those of five other people canonized Oct. 14 still were present at the Mass as reminders that the saints were flesh-and-blood people who lived holy lives.

The very formal relics, present in reliquaries with a red-wax seal, were set at the feet of a statue of Mary during the Mass. Most were what the church traditionally described as “first-class” relics: a piece of the actual physical remains of the saint, often bone fragments.

But Pope Francis himself used other items — traditionally known as “second-class” relics — that previously had used by two of the new saints: He carried in procession the crosier of St. Paul VI and wore his pallium; he also wore the blood-stained cincture, a rope belt, that St. Romero was wearing when he was assassinated while celebrating Mass in 1980. And for the Eucharist, he used a chalice that had belonged to St. Paul VI.

The formal reliquary for St. Paul VI was a glass vase containing the blood-specked undershirt he was wearing in November 1970 when a Bolivian artist stabbed him at the Manila airport.

The contents of the other reliquaries were:

— For St. Romero, a bone fragment.

— For St. Francesco Spinelli, a bone from his foot.

— For St. Vincenzo Romano, a vertebra.

— For St. Nunzio Sulprizio, a bone fragment from his finger.

— For St. Catherine Kasper, a bone fragment from her back.

— For St. Nazaria Ignacia March Mesa, a lock of her hair.