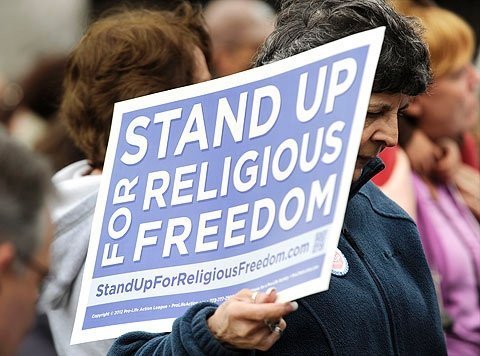 A woman holds a sign during a March 23 rally for religious freedom held outside the Federal Building in Rochester.

When word came down from a top committee at the U.S. Conference of Catholic Bishops that the Catholic faithful should devote two weeks to prayer, education and action on the topic of freedom of religion, a group of folks in Canandaigua took it to heart.

The "Renewing Our Legacy Task Force," a grassroots group of about 30 Catholics and people of other religions, have been planning a two-week festival called the Festival for Freedom, with top speakers, drama and activities all focused on religious freedoms.

The Festival for Freedom will take place at Notre Dame Retreat House, 5151 Foster Road, Canandaigua, each day from 8 a.m. to 8:30 p.m. June 21 to July 4. Each day will include a flag raising and lowering, Mass, eucharistic adoration and Benediction. On July 4 there will be a patriotic sing-along with speakers who will place the songs in their historical contexts. Nearly all of the festival events will feature free admission, though free-will offerings will be accepted.

"This (festival) is not a political statement," noted Deacon Lester, who is director of faith formation for St. Mary and St. Bridget/St. Joseph parishes in Canandaigua and East Bloomfield. "This is very much an exploration of religious freedom of Americans as it is reflected in our daily life as a country."

As part of the Festival for Freedom, staff from the nonpartisan National Center for Constitutional Studies will present a seminar on the constitution and the foundations of America. The session will run from 8:30 a.m. to 4:30 p.m on. Saturday, June 23, and the cost of a workbook for the session is $10.

Among other speakers will be Austin Ruse, president of the Catholic Family and Human Rights Institute and founder of the National Catholic Prayer Breakfast; Father Peter Stravinskas, an author, editor and Catholic apologetics specialist who founded The Catholic Response Magazine and The Catholic Answer; sociologist and professor Anne Hendershott; Loretta Fleming of the National Committee for a Human Life Amendment; and Kathleen Gallagher, director of pro-life activities for the New York State Catholic Conference and director of the Catholic Action Network.

"We are really aiming for the best of the best," Deacon Lester remarked.

He noted the debate over religious freedom concerns people of all religions, a point that will be echoed in the talk of Jonathan Tobin, senior online editor of Commentary magazine, who has edited and written for several national Jewish publications.

On June 30, the festival will offer activities geared toward teaching families, including children, about Catholic moral teaching and how to make good decisions. Theater of the Word, a drama troupe from St. Louis, Mo., will present several performances, and first-run movies will be shown, Deacon Lester said.

Space in the retreat center’s chapel is limited to 200 people, so preregistration for events is recommended. Those who wish to purchase lunches and dinners need to order three days in advance. Participants also are able to picnic on the grounds of the retreat center, and organizers are working to offer a transportation option from Monroe County.

The event is being funded by individual and corporate sponsorships. Additional support has been provided by the Diocese of Rochester, the Knights of Columbus and Holy Family Communications, which operates WHIC 1460-AM and 92.9-FM radio stations in Rochester and WMTQ 88.1-FM radio in Elmira and Corning.

Diocesan Life Issues Coordinator Jann Armantrout said the U.S. Conference of Catholic Bishops has called Catholics to push back against efforts that she said effectively strip people of their religious freedoms.

"In the past six months, there’s been a true erosion in our ability to remain true to our Catholic faith and participate in the public square," Armantrout said.

One of the events sparking concern was a mandate from the Department of Health and Human Services as part of the 2010 Affordable Care Act that employers and/or their insurance companies pay for artificial contraception, sterilization and abortion-inducing drugs for employees. The mandate contains a religious exemption, but it is so narrowly drawn that it excludes Catholic schools, hospitals and charities, according to the USCCB.

The Supreme Court is expected to rule on the constitutionality of the Affordable Care Act at the end of June. Regardless of the ruling, the USCCB has said Catholics need to speak out against an array of attacks on religious freedom, including state laws preventing pastoral care for undocumented immigrants and discrimination against Catholic humanitarian service agencies because they refused to refer human trafficking victims to artificial contraception and abortion services.

"We’re not just talking about any alleged ‘war on women,’" said Armantrout, referring to some commentators’ characterizations of the USCCB’s religious-freedom efforts. "We’re talking about being able to minister as we believe Christ calls us to minister to our fellow citizens without restriction."

EDITOR’S NOTE: For details on the Festival of Freedom, visit www.festivalforfreedom.com or call Deacon Claude Lester at 585-394-1220, ext. 15.