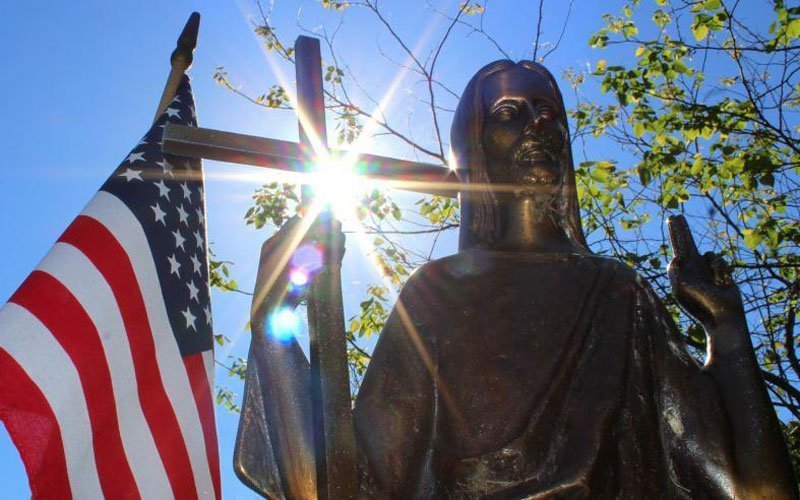 Sun shines through a statue of Christ on a grave marker alongside an American flag June 7 at St. Mary Catholic Cemetery in Appleton, Wis. U.S. Catholics are encouraged to pray and take action act in support of religious liberty at home and abroad during Religious Freedom Week June 22-29. The them of this year's observance, sponsored by the U.S. Conference of Catholic Bishops, is "Serving Others in God's Love." (CNS photo by Bradley Birkholz)

“Serving Others in God’s Love” is the theme of this year’s Religious Freedom Week. U.S. Catholics are encouraged to pray and take action act in support of religious liberty at home and abroad.

“Religious freedom allows the space for people of faith to serve others in God’s love in ministries like education, adoption and foster care, health care, and migration and refugee services,” said the chairman of the U.S. Conference of catholic Bishops’ Committee for Religious Liberty,

“We encourage people of faith to reflect on the importance of religious freedom so that we might have the space to carry out our mission of service and mercy,” Archbishop Joseph E. Kurtz of Louisville, Kentucky, said in a statement.

He also invited “everyone to pray for our brothers and sisters who face intense persecution in other parts of the world.”

Two USCCB websites, www.usccb.org/ReligiousFreedomWeek and www.usccb.org/freedom, have resources for observing the week and learning about current and ongoing threats to religious liberty.

For example, for each day of the special week there is a prayer and reflection in English and Spanish, plus an action item, such as a question reflecting on a religious freedom issue and then a suggestion that reflection be shared on Twitter using the hashtag #ReligiousFreedomWeek.

There are also graphics and social media downloads, promotional bulletin inserts, “homily helps” and a variety of resources that address domestic religious freedom and others about international religious freedom. All the materials are in English and Spanish.

A USCCB news release on the observance quotes Pope Francis from his 2015 visit to the United States. In remarks to president Barack Obama Sept. 23, 2015, the pontiff said that religious freedom “remains one of America’s most precious possessions.”

“And, as my brothers, the United States bishops, have reminded us, all are called to be vigilant, precisely as good citizens, to preserve and defend that freedom from everything that would threaten or compromise it,” Pope Francis said.