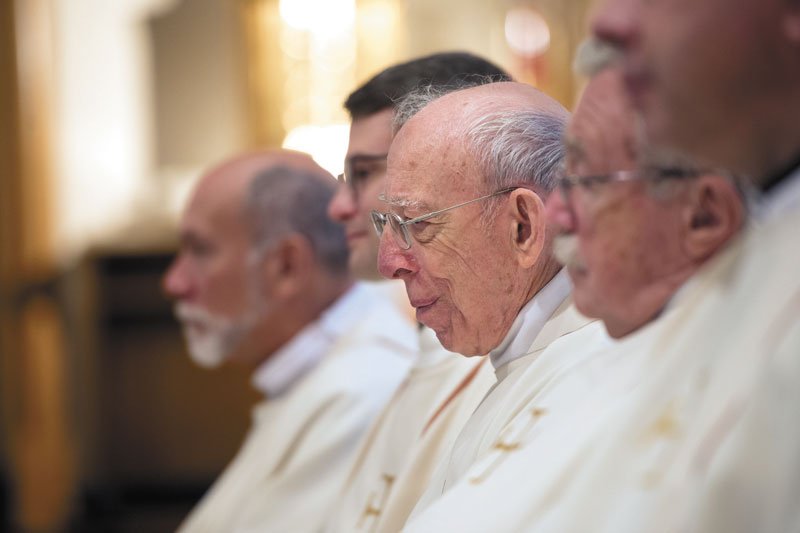 Over the past 150 years, many religious orders have made their homes in the Rochester Diocese and ministered to its people. Today, members of these orders continue to serve in a variety of ministries, such as teaching in Catholic schools, serving at diocesan parishes, feeding the hungry, sheltering the homeless, providing health care to the uninsured, offering retreats and spiritual direction, and serving as chaplains and campus ministers.

The Basilian order originated in France in 1822 and, three decades later, established a presence in Toronto, Canada. Basilians first served in the Rochester Diocese as teachers at Aquinas Institute from 1927-32, and assumed leadership of the high school in 1937.

The Basilians founded St. John Fisher College in Pittsford in 1948 and in 1976 took over priestly staffing at Christ the King Church in Irondequoit. The Basilians began covering additional churches in Irondequoit in 2010 when pastoral planning led to the formation of Blessed (now St.) Kateri Tekakwitha Parish.

Capuchin Franciscans of the Province of St. Mary

The first Carmelite Fathers were hermits on Mount Carmel in Palestine in the 12th century. In the 1870s and 1880s Carmelites began arriving in America. They have been serving in the Diocese of Rochester since at least the early 1940s, when they opened the Carmelite House of Studies in Auburn.

Several years later the Carmelites founded Mount Carmel High School in Auburn at the request of Bishop James E. Kearney. After Mount Carmel closed in 1970 several of the priests began teaching at other local Catholic high schools. Over the years Carmelite priests also have assisted at parishes, schools and hospitals throughout Monroe County.

Although the origins of the Carmelite order date back more than 800 years, St. Teresa of Avila is considered to be its founder. She entered the order in the 16th century and was determined to restore it to its former zeal. She established 17 monasteries before her death, but the first Discalced Carmelites did not arrive in the U.S. until 1790.

In 1930 five Carmelite sisters came to the Rochester Diocese at the request of Bishop Francis O’Hern and founded a monastery on Rochester’s Saratoga Avenue. A few years later the community moved to East Avenue, and in 1956 it moved into the current monastery in Pittsford.

Order of Cistercians of the Strict Observance

In April 1951, the first monks belonging to the worldwide Order of Cistercians of the Strict Observance — more commonly known as Trappists — arrived in Piffard, Livingston County.

Although the community at the Abbey of the Genesee is cloistered, members of the public are encouraged to visit. Public offerings include Mass, Liturgy of the Hours, retreats, prayer and discussion groups, shopping at the bread store and religious bookstore, and walking the monastery’s grounds. The monks also are available for confession and to give spiritual direction, particularly about vocations.

At the bread store, products from the abbey’s bakery, including the famous Monks’ Bread, are available for purchase.

Franciscan Sisters of the Allegany

The Franciscan Sisters of Allegany was founded in Allegany, N.Y., in 1959, and members of the order were active in the Rochester area’s Catholic schools for three decades beginning in the 1930s. One of the sisters also was the pastoral administrator for two parishes in the Finger Lakes region until retiring in 2016.

The order’s motherhouse is located near the campus at St. Bonaventure University and houses nearly 90 sisters. In past years, the sisters there also had worked as professors at the college.

Mission Helpers of the Sacred Heart

Mary Frances Cunningham founded the Mission Helpers of the Sacred Heart in Baltimore in 1890. Sisters came to Rochester in 1956 to set up a religious-education program at Fairport’s Church of the Assumption for area public-school students. Eventually, they provided catechist training for seminarians and diocesan parishes. One of the sisters currently serves as pastoral associate at Fairport’s Church of the Resurrection.

Missionaries of the Precious Blood

The Missionaries of the Precious Blood was founded in 1786 by St. Gaspar del Bufalo. The first members of the order arrived in America in the first half of the 19th century, and served in Rochester’s Most Precious Blood Parish from 1930 until the mid-1980s.

The missionaries also temporarily served at St. Anthony Parish in Rochester and St. Jerome Parish in East Rochester. They established a mission house on Highland Avenue in Rochester, and the house is a place of welcome and hospitality for people on the margins of society.

The Order of St. Benedict traces its roots to the sixth century when St. Benedict wrote his rules for monastic life.

In the spring of 1951 four Benedictine monks moved to Pine City on the outskirts of Elmira and founded Mount Saviour Monastery. Members of the community hold regular prayer throughout the day; engage in study and discussion; tend to the on-site sheep farm, orchard, gardens and apiary; and create works of art that are sold in the monastery’s gift shop. Visitors are welcome to pray with the monks or to stay as guests at the monastery’s retreat houses.

St. Alphonsus Liguori founded the Congregation of the Most Holy Redeemer in 1732 in Naples, Italy. The priests of this order, known as Redemptorists, came to America in 1832 at the request of six American bishops, and Rochester was one of the first places they settled.

They began giving an annual retreat at St. Bernard Seminary in Rochester in 1921, and in 1926 opened a retreat house in Geneva on the shores of Seneca Lake. They directed retreats at that property until 1956, then opened a new retreat house in Rochester. In 1967 the Redemptorists opened Notre Dame Retreat House, overlooking Canandaigua Lake. It offers retreats for parish groups, couples and individuals throughout the year.

Sister Catherine McCauley founded the Sisters of Mercy in her native Ireland in 1831, and the order arrived in the Diocese of Rochester in 1857. The local congregation founded hospitals and schools, including St. James Mercy Hospital in Hornell, Our Lady of Mercy High School in Brighton and Notre Dame High School in Elmira.

Serving the homeless and providing literacy and other services for English-as-a-second-language learners are among the objectives of contemporary ministries operated or sponsored by the Sisters of Mercy. Sisters of Mercy from Rochester also carried out missionary work in Chile for many years.

The New York, Pennsylvania, Pacific West Community of the Sisters of Mercy, headquartered in Buffalo, was created in 2008. It comprises Mercy communities in Rochester, Buffalo, Pittsburgh, the Philippines and Erie, Pa.

Jesuit priests arrived as missionaries in the future Diocese of Rochester in the mid-17th century, working with Native American tribes over the span of a few decades in such present-day communities as Victor, Bloomfield and Honeoye Falls. Some 300 years later, in 1954, the order returned to the area to launch McQuaid Jesuit High School. This development came about largely because of then-Bishop James E. Kearney’s high regard for the order. Today area Jesuits remain synonymous with McQuaid, but the order’s ministry is not limited to the school. Jesuit priests provide sacramental assistance at Rochester-area parishes, assist with Sunday-evening liturgies at Nazareth College, work as chaplains at Monroe County Jail, and oversee Catholic campus ministry at both Cornell University and Ithaca College.

The School Sisters of Notre Dame was founded in 1833 in Bavaria. In 1854, the sisters arrived in Rochester and began establishing Catholic schools. More than a century later, the sisters taught at Bishop Kearney High School from its founding in 1965 and established Notre Dame Learning Center in 2004. The sisters now serving in Rochester belong to the Atlantic Midwest School Sisters of Notre Dame, and several staff Notre Dame Learning Center. Today the order numbers about 3,000 sisters ministering around the world, with approximately 900 living in communities in North America.

The Sisters of St. Joseph was founded by a group of women in France in 1650. Two hundred years later, a group of Sisters of St. Joseph traveled from Missouri to Canandaigua and established a tiny community, which eventually became the Sisters of St. Joseph of Rochester. The sisters founded Nazareth College in 1924, operated Nazareth Hall and Nazareth Academy elementary and high schools for many years, and continue to operate Nazareth Elementary School. The congregation also sponsors ministries that provide hot meals and mentoring to job seekers; health care to the uninsured or underinsured; pediatric respite care during the day for young children with serious medical and developmental conditions; and education for special-needs students. Sisters of St. Joseph also serve in parishes and in a number of local ministries, and several sisters carry out missionary work in Selma, Ala., and in Brazil.

Sisters of the Cenacle

The Sisters of the Cenacle traces its roots to its founding in France by Therese Coudrouc in 1826. The sisters first came to the United States in 1892 and to the Diocese of Rochester in the 1940s. The sisters were well known for operating a retreat center on East Avenue until the 1980s. The sisters, who are now retired, reside at the Sisters of St. Joseph Motherhouse in Pittsford.