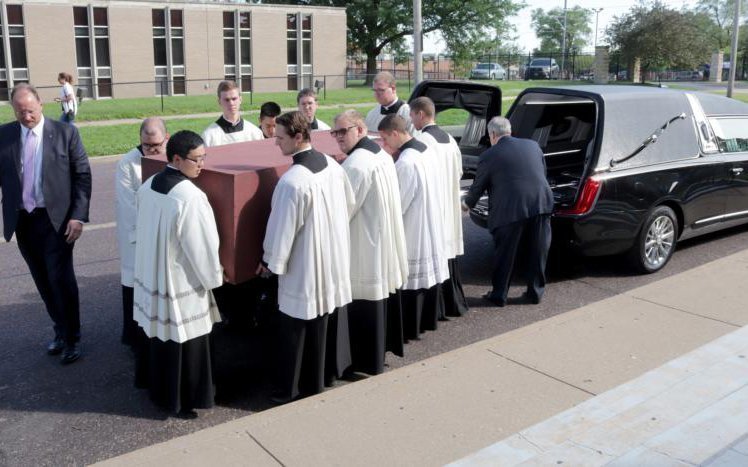 Seminarians of the Diocese of Peoria, Ill., carry the container with the remains of Archbishop Fulton J. Sheen from the hearse to the steps of the St. Mary's Cathedral in Peoria June 27, 2019.(CNS photo by Jennifer Willems/The Catholic Post)

PEORIA, Ill. (CNS) — Peoria Bishop Daniel R. Jenky announced June 27 that the remains of Archbishop Fulton Sheen were being transferred to the Cathedral of St. Mary of the Immaculate Conception from St. Patrick’s Cathedral in New York. Sheen served as bishop of Rochester, New York, from 1966 to 1969,

Bishop Jenky also said the sainthood cause for the archbishop, a native of the Peoria Diocese, has resumed.

On June 7 the New York Court of Appeals rejected a final appeal from the Archdiocese of New York and the trustees of St. Patrick’s Cathedral, who sought to keep the remains of the famed orator and media pioneer interred at St. Patrick’s, where they have rested since after his death Dec. 9, 1979.

“Shortly after this ruling, the Archdiocese of New York and the Diocese of Peoria cooperated in arranging for the transfer,” the diocese said in a news release. “This transfer followed civil law and church law.”

“The proper civil permits for the transfer were secured. Church law requires that the transfer of the remains of one considered for beatification must to be done without any solemnity. As a result, the transfer could not be publicized in advance,” it said.

No liturgical ceremony or public gathering could be held during the transfer, the diocese added.

In the early morning of June 27, Joan Sheen Cunningham — Archbishop Sheen’s niece and closest living relative — and Patricia Gibson, chancellor and attorney for the Diocese of Peoria, along with funeral home and cemetery personnel, gathered at St. Patrick Cathedral in New York.

The prelate’s remains were disinterred from the basement crypt under the cathedral’s main altar at St. Patrick Cathedral and immediately taken to LaGuardia Airport and flown to Chicago’s O’Hare Airport to be transported to Peoria’s cathedral.

The remains will be encased into a marble monument inside the cathedral at the side altar dedicated to Mary, Our Lady of Perpetual Help.

After working for 18 years with Bishop Jenky on the archbishop’s cause, “it was a great privilege and honor to be present and witness the transfer of Archbishop Sheen’s remains to his home cathedral in Peoria where he served Mass as a youth and was ordained priest 100 years ago,” Gibson said in a statement.

Gibson was appointed as the official witness of the disinterment and transfer of the remains as required by the Vatican and church law, the diocese said.

“Now that the three years of legal litigation has ended, I am grateful that the Archdiocese of New York cooperated with this transfer. I am excited for the next steps in the cause and pray that a beatification will happen very soon,” she added.

The Peoria Diocese opened Archbishop Sheen’s cause for canonization in 2002. His heroic virtue and life of sanctity were recognized in 2012 by Pope Benedict XVI, who granted him the title “Venerable.”

In September 2014 the Diocese of Peoria announced “with immense sadness” the cause was being suspended because the Archdiocese of New York had denied a request from Bishop Jenky, who is president of the Archbishop Sheen Foundation, to move the archbishop’s body to Peoria.

Cunningham filed a legal complaint in 2016 seeking to have her uncle’s remains moved to the cathedral in Peoria, a factor the Diocese of Peoria has maintained is critical for a hoped-for future beatification.

Twice, the Manhattan Supreme Court ruled in her favor and twice the New York Archdiocese appealed, halting the transfer. After an evidentiary hearing last year clarifying what Archbishop Sheen’s wishes would have been, Manhattan Supreme Court Justice Arlene Bluth again agreed with Cunningham’s request. It was an appeal of that ruling by the archdiocese and the cathedral’s trustees that was rejected by the New York Court of Appeals.

The diocese said the Congregation for Saints’ Causes will present an alleged miracle attributed to Archbishop Sheen’s intercession to Pope Francis for his decree authenticating it.

The alleged miracle involved the healing of a newborn infant who was without vital signs for over 60 minutes. A seven-member team of medical experts convoked by the Vatican reported there is no natural explanation for the boy’s survival.

With progress already made and pending the approval of Pope Francis, diocesan officials believe a beatification could take place relatively soon after the anticipated arrival of the remains at St. Mary’s Cathedral.