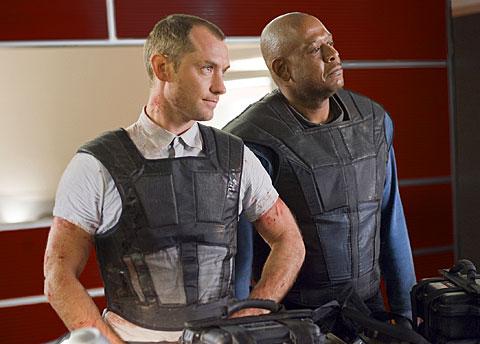 NEW YORK (CNS) — The last time Forest Whitaker was paired with an actor hailing from Great Britain — namely James McAvoy in "The Last King of Scotland" — he won an Oscar for his portrayal of Ugandan dictator Idi Amin.
?
In the futuristic thriller "Repo Men" (Universal), he co-stars alongside Englishman Jude Law. No awards are in the offing, but, in addition to Whitaker, the two films share unspeakable brutality. Indeed, with all due respect to Amin’s real-life victims, what transpires here, though fictional, is arguably more disturbing and exponentially more gruesome than the reign of terror depicted in that estimable 2006 movie.
?
Law and Whitaker portray Remy and Jake — schoolyard rivals, Army buddies, and now, in the near future, colleagues within a division of a corporation called The Union. Part soldiers, part hack surgeons, their job is to repossess artificial human organs when the recipient has fallen behind on the exorbitant interest payments. They stun their victims and then slice them open without benefit of painkillers or any hygienic precautions.
?
It’s difficult to imagine a more revolting or wicked practice. And because it has no redeeming qualities to offset the butchery and degradation, "Repo Men" counts among the most distasteful movies to appear in recent years. The participation of serious actors such as Whitaker, Law and Liev Schreiber, who plays Jake and Remy’s boss Frank, only adds insult to injury.
?
At the urging of his wife, Remy agrees to find a new line of work but experiences a life-altering health complication while carrying out his last assignment. Jake, who is none too happy about his partner’s pending career reinvention, becomes his adversary. Alice Braga appears in the role of Beth, a lounge singer and drug addict with whom Remy then goes underground.
?
Comprised of used and barely functioning parts, "Repo Men" is a clunker no matter how you look at it — a technically undistinguished orgy of violence and patently immoral behavior. Adapted by Eric Garcia and Garrett Lerner from Garcia’s novel "The Repossession Mambo," the movie’s science-fiction chassis, which features a major twist involving virtual technology, doesn’t in the least excuse its trashiness.
?
There’s scant evidence that director Miguel Sapochink wants to spin a profound science-fiction yarn, let alone offer a serious cautionary tale or insightful social satire. Because the mayhem is exaggerated to a near-cartoonlike degree and the dialogue is speckled with weak gallows humor, the effort feels as cynical and barren as the actions it’s depicting.
?
The subject matter has topicality as a dystopian nightmare concerning capitalism run amok in the health care arena. Might it be a slippery slope from hip replacements to the ubiquitous transplantation shown in the movie? Why is there so much demand for replacement organs? How could a society allow for such dehumanizing exploitation? Such questions are far beyond the ken of "Repo Men."
?
At the outset, Remy poses a conundrum about how a cat placed in a box can be both dead and alive at the same time. The puzzle has some relevance to his fate, but a great deal more to that of audience members who will necessarily experience a deadening sensation.
?
The film contains unrelenting brutal, graphic violence; grisly images of surgical incisions and operations; instances of drug use; fleeting glimpses of bystanders engaged in sex acts; several implied or simulated nonmarital sexual encounters between the leading male and female characters; partial rear nudity; and pervasive rough, crude and profane language. The USCCB Office for Film & Broadcasting classification is O — morally offensive. The Motion Picture Association of America rating is R — restricted. Under 17 requires accompanying parent or adult guardian.
?
– – –
?
McCarthy is a guest reviewer for the U.S. Conference of Catholic Bishops’ Office for Film & Broadcasting. More reviews are available online at www.usccb.org/movies.