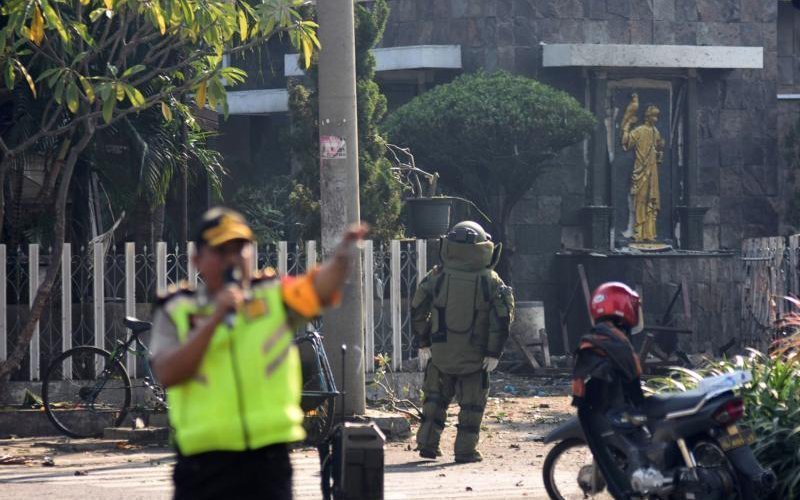 A member of the police bomb squad unit examines the site of a May 12, 2018, explosion outside Santa Maria Catholic Church in Surabaya, Indonesia. (CNS photo by M Risyal Hiday, Antara Foto via Reuter)

The report, issued June 21, collected data on each nation for the year 2018. The China report itself is 87 pages long.

“The government continued to exercise control over religion and restrict the activities and personal freedom of religious adherents when the government perceived these as threatening state or Chinese Communist Party interests,” the report said. “There continued to be reports of deaths in custody and that the government tortured, physically abused, arrested, detained, sentenced to prison or harassed adherents of both registered and unregistered religious groups for activities related to their religious beliefs and practices.”

In Vietnam, “members of religious groups said some local and provincial authorities used the local and national regulatory systems to slow, delegitimize, and suppress religious activities of groups that resisted close government management of their leadership, training programs, assemblies, and other activities,” the report said, including “reports of severe harassment of religious adherents by authorities.”

“Since 2004, Saudi Arabia has been designated as a ‘country of particular concern’ under the International Religious Freedom Act of 1998 for having engaged in or tolerated particularly severe violations of religious freedom,” the report added. “Most recently, on Nov. 28, the secretary of state redesignated Saudi Arabia as a CPC, and announced a waiver of the sanctions that accompany designation.”

The report includes disclaimers. “Motivations and accuracy of sources vary, however, and the Department of State is not in a position to verify independently all information contained in the reports,” it said. “The views of any particular source are not necessarily those of the United States government,” it added.

“Specific inclusions or omissions should not be interpreted as a signal that a particular case is of greater or lesser importance to the U.S. government,” the report noted. “The goal is to shed light on the nature, scope, and severity of actions impacting religious freedom through illustrative examples.”

A sampling of situations found in the report provide example after example of troubling situations.

In the Democratic Republic of Congo, “international NGOs (nongovernmental organizations), media and religious organizations reported the government subjected religious organizations and leaders, most prominently Catholic, to intimidation, arbitrary arrest, and in some cases violence due to the Catholic Church’s support for credible elections, involvement in protest marches in January and February, and the implementation of the December 2016 Sylvester Agreement between the government and opposition parties,” the report said.

In Eritrea, “NGOs reported the government continued to detain 345 church leaders and officials without charge or trial, while estimates of detained laity ranged from 800 to more than 1,000. Authorities reportedly continued to detain 53 Jehovah’s Witnesses for conscientious objection and for refusing to participate in military service or renounce their faith,” the report said. “An unknown number of Muslim protesters remained in detention following protests in Asmara in October 2017 and March 2018. The government continued to deny citizenship to Jehovah’s Witnesses after stripping them of citizenship in 1994.”

In Russia, “police conducted raids on the private homes and places of worship of religious minorities. Religious minorities said local authorities used anti-extremism laws to add to the government’s list of banned religious texts. Local officials continued to prevent minority religious organizations from obtaining land and denied them construction permits for houses of worship,” according to the report.

“The government continued to grant privileges to the ROC (Russian Orthodox Church) not accorded to any other church or religious association, including the right to review draft legislation and greater access to public institutions. The government fined and issued deportation orders for foreign nationals engaging in religious activity, including a rabbi and two African Pentecostals.”

In Guatemala, the report said, “some Catholic clergy continued to report threats and harassment against them because of their engagement in environmental protection.”

The report said that in Nigeria, “terrorist organizations Boko Haram and Islamic State-West Africa continued to attack population centers and religious targets.” It added, ” Although government intervention reduced the amount of territory these groups controlled, the two insurgencies maintained the ability to stage forces in rural areas and launch attacks against civilian and military targets across the Northeast.”

In Pakistan, “the courts continued to enforce blasphemy laws, punishment for which ranges from life in prison to execution for a range of charges, including ‘defiling the Prophet Muhammad,'” the report said. “According to civil society reports, there were at least 77 individuals imprisoned on blasphemy charges, at least 28 of whom had received death sentences, although the government has never executed anyone specifically for blasphemy.”

Not everything is a picture of worsening government and societal hostility toward religion. In Mauritania, for example, “for the first time in the country’s history, the government accredited an ambassador of the Holy See to the country. The MIATE (Ministry of Islamic Affairs and Traditional Education) continued to collaborate with independent Muslim religious groups as well as with foreign partners to combat extremism, radicalization, and terrorism through a series of workshops in all 15 provinces.”

Sam Brownback, U.S. ambassador at large for international religious freedom, accepted an invitation to testify on the report June 27 before the bipartisan congressional Tom Lantos Human Rights Commission.
– – –
Editor’s Note: The full report can found be online at https://bit.ly/2FnW6MS.